The past week, featuring warmer weather and — at last! — the obliteration of most of the snow on the Island, saw a huge change in the bird life of the Vineyard. Sea ducks, after a winter in our waters, headed north in droves to breed. And on land, a strong wave of early songbird migrants hit our shores.

Among these was one of my personal favorites, the eastern phoebe. Drab birds, smaller than a robin and belonging to the flycatcher family, all our phoebes generally arrive almost at once: just a few days after the first report of the spring, virtually all of our breeding phoebes are here.

Flycatchers as a group are among the dullest songbirds, and the eastern phoebe, grayish brown on the back and off-white underneath, is dull even by flycatcher standards. You might say that the lack of distinct field marks is the most reliable field mark for this bird — though its habit of bobbing its long tail up and down is a valuable behavioral clue. To my eye, a phoebe glimpsed quickly has a faint yellowish cast; this is a subtle and perhaps illusory trait, but a useful one for a birder. Overhead, a phoebe shows rather squared-off wings and a narrow-based tail with a distinct notch at the end — again, subtle but reliable cues to the bird’s identity.

Still, you’re more likely to hear your first phoebe of the year than to see it. These are chatty birds, often giving a sharp “chip” note and singing (if that’s what you call it) from the moment they arrive: a sneezy “PHEE-bee” is the best this bird can manage. But it’s a welcome sound in late March or early April. While the bulk of the singing is done by the male, I believe that this is a species in which the females also sing.

More so than nearly any other bird, the phoebe tolerates, or even prefers, life around humans. The species originally nested, and sometimes still does, in wholly natural settings, building its mossy nest on a rocky ledge or at the base of a tree branch. But when humans began building barns, sheds, and houses in the phoebe’s world, these birds were quick to recognize an opportunity. These days, a typical phoebe nest is tucked up tight under the eaves of a human structure, safe from the weather.

A pair of phoebes often starts multiple nests, sometimes getting them all well along toward completion before deciding which one to lay eggs in. This habit may help fool would-be nest predators, and in a seasonal human community like the Vineyard’s, it may give the birds some flexibility in adjusting to changing patterns of human activity as the season progresses: if the frequency of disturbance around one nest gets too great, the birds simply forget about that one and focus on a nest in a quieter spot.

The arrival of these birds seems to coincide quite precisely with the first real blooms of insect life, often in the form of swarms of ephemeral flies. But as the spring advances, phoebes show remarkably varied tastes in their insect prey. As with most flycatchers, phoebes prey heavily on bees and wasps. But studies of their diet have shown that they happily eat beetles, flies, and moths, with even the odd tree frog or salamander thrown in. They’re also able to handle vegetable food, mainly berries — an ability that helps them survive if they’re caught by unexpected wintery weather.

Most of a phoebe’s prey is taken on short aerial sallies: The bird perches on a twig, locates its target by sight, launches its attack, and often nabs its prey on the first attempt. The bird’s bill, broad with a distinct hook at the tip, is a formidable cruncher of bugs. But phoebes also pick food — spiders, or insect eggs and larvae — from branches or structures, and they will even forage on the ground, tossing dead leaves aside to search for arthropods.

Phoebes enthusiastically try again if they lose their first clutch of eggs, and if they fledge their first set of young, I believe, they’re capable of pulling off a second brood. Our nesting phoebes will be with us into the early fall, with adults leaving before the young of the year. And while we don’t get many transient phoebes here in the spring, fall migration can bring large numbers of phoebes from farther north. The species continues to pass through well into October, and a few individuals even try to winter in our region, with some surviving until spring at least in mild seasons.

Their ecumenical diet means that phoebes eat many insects that humans consider beneficial. But they eat harmful insects with equal zeal, and like most insectivorous birds, they adjust their diet to take advantage of any prey species that gets especially common. So the phoebe is a powerful force for balance, tending to regulate insect populations. This makes them helpful birds from our perspective, and if you have a pair nesting on your house shed, consider yourself fortunate. 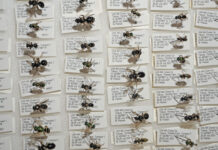