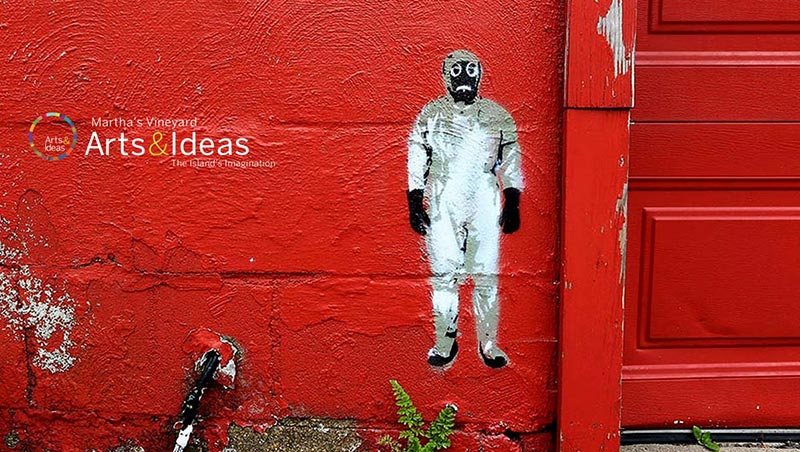 Have you seen the latest issue of Martha’s Vineyard Arts & Ideas magazine from the Martha’s Vineyard Times? The newest collection of Island arts is now available, free, at local galleries, performance spaces, hotels, and other venues around the Island. “This magazine speaks to and is an arrangement of works found in the margins,” says Patrick Phillips, the magazine’s founder and design director.

The cover of the magazine is an image of a person in a protective suit painted on a red wall, an example of found art in Vineyard Haven. Inside, contributor Keya Guimaraes writes about another painted wall, the border wall separating the U.S. from Mexico, in an article about Gretchen Baer and the Border Bedazzlers. “For some, the multibillion-dollar border fortification may symbolize protection, for others it may scream fear, but for Gretchen Baer, the wall is an opportunity. A canvas. A bridge,” writes Ms. Guimaraes.

Another story comes from Arts & Ideas contributing editor Kate Feiffer, who interviewed one of the Lobster Boyz, a duo of pseudonymous guerilla street artists who use public street signs across the Island as their canvases.

Then there’s artist Traeger di Pietro, who shows us the art he’s made from stains on a warehouse floor. “I often see oil spills or some type of debris on the floor that reminds me of an animal, person, or another everyday object,” says Mr. di Pietro.

And then there are the Ideas. Niki Patton asks, “Do I Matter?” and Frank Bergon proposes a college campus on the Vineyard. Cartoonist Paul Karasik looks back to the Charlie Hebdo massacre, and says “Je Suis Charlie Brown.” Nancy Aronie celebrates poet Peggy Freydberg, who passed away this year at the age of 107. We even head off to Hollywood for a spin in Paul Newman’s Porsche with novelist Ward Just, as Vineyard authors discuss their experiences when their books are optioned for the silver screen. Writes novelist Frank Bergon about one of his own experiences with an enthusiastic director:

“You know that scene down in Mexico,” he asked, “where those two guys are facing off in a bungalow?”

I admitted I was familiar with the scene, since I’d written it.

With dramatic emphasis, the director nearly shouted into the phone, “That’s a scene, man!”

I never heard from him again.

Grab your copy and discover more of the stories behind the Island’s imagination and visit our website: mvartsandideas.com