For those familiar with the work of artist Rez Williams, the collection of his most recent work now showing at A Gallery in Oak Bluffs may be somewhat of a surprise. Well known for his large-scale paintings of New Bedford fishing boats, the popular Vineyard artist has more recently created a series of scenes of rural Ireland.

In an email to The Times Mr. Williams addressed the recent change in direction of his subjects “I began life as a visual artist with large shaped canvasses, internal geometric forms related to the shape of the stretcher, hard edges and unmodulated color. The choice of fishing vessels were/are an outgrowth of that underlying interest in abstraction. I’ve always tried to work in the gap between abstraction and reality and I think that holds for the new landscapes and New York cityscapes as well. Subject matter, therefore, is relatively unimportant.”

Mr. Williams’ current solo show spotlights a number of large works executed during a 2014 fellowship at the Ballinglen Arts Center in Ballycastle, County Mayo, Ireland. They are not your typical bucolic Irish landscapes (with the exception of a couple of striking paintings of cliffs). The latest paintings are intimate, realistic depictions of a small farming village and its environs. There is not a touch of idyllic interpretation or romantic imagining. The paintings are also devoid of any human figures, although human industry and day-to-day life are very clearly in evidence. In this respect, this latest series is not at all a departure from Mr. Williams’ boat paintings — a fascinating study of the beauty to be found in rather ordinary images that many of us might overlook.

Mr. Williams faced a bit of an artistic challenge during his residence at Ballinglen. According to his artist’s statement, “This northwest part of Mayo has a brutal desolation, with high plateaus of peat bog, clumps of smallish trees in the few crannies of the landscape, and a large powerful sky full of chaotic frontal systems off the North Atlantic.”

In an email to The Times he further described the setting in Ballycastle  “The little village of Ballycastle on the north west coast of Co. Mayo is unremarkable, consisting of a single main street going downhill to the west and surrounded as far as you can see by open space, some of it devoted to grazing.”

The desolation and rawness of the land have proven to be the perfect setting for the artist’s unique vision. Mr. Williams is one of the most interesting and contemporary of Vineyard artists, whose work is much admired, and he has attracted a number of serious collectors. He captures the drama of sea, sky, and land, not from meticulous blending and indistinct outlines, but from bold brushstrokes and a masterful use of blunt color placement. In this respect, Mr. Williams is almost abstract and representational at the same time.

You may notice a lightening of the palette in his Irish landscapes, something he himself was unaware of until he returned with the paintings to his West Tisbury studio. “The studio I was given at the Ballinglen Foundation had no windows, a locked door, a sink, chair, white walls, grey floor  and a large north facing skylight. I had never painted in natural light before–you can see everything!  That experience altered color relationships in subtle ways which may be of use down the road,” said Mr. Williams.

The paintings in the Ireland series feature industrial elements like commercial barns, aluminum sheds, farm machinery, and telephone wires. With a rather featureless landscape to draw from, these were the elements that the artist chose to turn his attention to: “Not having a car, I focused primarily on subject matter within walking distances, looking for material that was also, for the most part, fairly pedestrian in character. I’ve always felt that a satisfactory painting can be made with very ordinary visual ingredients.”

The question that begs to be answered is why Ballinglen is located in a landscape with so little obvious aesthetic appeal, and how other artists have dealt with this challenge. Mr. Williams has created an exceptional body of work from this working-class setting. The Ireland of tourist brochures it is not. The artist has captured the Ireland of the people with agrarian roots stretching back through centuries. And, somehow, he has created a series of paintings from this subject matter that is both beautiful and completely modern.

The show at A Gallery also includes a couple of the artist’s New York City paintings. Once again Mr. Williams has turned his eye away from the obvious and toward the mechanics of life. One painting is of the Whitney Museum under construction, the edifice surrounded by scaffolding. The other is a view of a hulking submarine moored in the Hudson River.

Collectors of Mr. Williams’ work descended on A Gallery before the show was even completely hung. By the time of the opening, there were a number of red dots in evidence, indicating early sales. For those interested in checking out work that lies outside the traditional land- and seascapes to be found in abundance here, this is a show not to be missed. 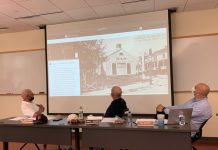 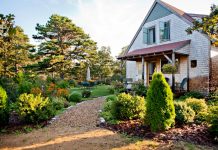 ‘Trying to create some stability’