One of the benefits of being a reporter is the opportunity to test perceptions against reality. Take croquet: not what we think it is, and not as easy as it seems.

We’ve all played it at one time or another, mostly at cookouts and after a few beverages. The game played by accomplished practitioners at the Edgartown Croquet Club championships on Saturday is very different. What I was hoping for was elegant ladies in long sundresses and floppy hats, gents in white duck trousers and boaters. The ladies were elegant and the gents were gentleman, but tennis whites were the order of the day.

And the game they play is an exhausting combination of skill, timing, and strategy. Think chess on grass or billiards on the lawn. Last Saturday the four remaining teams in the ECC doubles tournament squared off in a round-robin format to determine the 2015 winner.

Bill Elbow and Joan Collins won over Bill Blakesly and Susie Herr for the laurels, after eight hours of play.

The club has a playing field by the tennis courts at the Boys and Girls Club of Martha’s Vineyard, and it gets used.

“We have about 25 active members, and they are active,” Jack Schott, a long-term member, said after he and partner Linda Shaw defeated Edie Clark and Norm Mulroney in a tight match. “This field gets used on a daily basis right through winter unless there’s snow on the ground.”

Mr. Schott is a quietly engaging and cerebral man, who is also hell on wheels with the mallet. He traded golf for croquet 34 years ago, has played at high levels in the U.S. and England, and is regarded as a top-level player and referee, according to several of his fellow ECC members.

“I found croquet to be more strategic, more a mental game. It is physically more demanding than golf, and actually requires more strength,” he said.

Mr. Schott’s favorite game was imported from France to England by King Charles II in the 17th century, and has roots extending back to the 14th century in Europe. Croquet has multiple permutations and versions, as you might expect after 600 years of tweaking by countries around the world.

The ECC tourney played the American six-wicket version, in which teams do their best in one-hour, 15-

minute matches. Players attempt to get through as many wickets as possible, while limiting opponents’ opportunities by striking and deflecting their balls off-course. Players get two extra strokes for passing through a wicket or hitting their partner’s ball. They may also render an opponent’s ball “dead” by striking it. The ball becomes alive and may be played again only when the opponent’s partner strikes it. After several hours of observation, it becomes clear that the rules and strategy for playing croquet are implacable, unavoidable, and impeccably fair.

When top players like Mr. Schott are on, opponents tend to do some thumb-twiddling. “A player like Jack could probably go right around the course by himself, but it’s important to have your partner close to you for best effect,” Mrs. Schott explained.

In short, when both team members score above their handicap, the team’s chances of winning improve.

Underneath the win-win philosophy is an “extraordinarily intense” environment, as Mrs. Schott put it.

Players think their way through the course, always positioning for the next shot, and display a marvelous ability to hit a ball through a wicket that is only 1/16th of an inch wider than the ball.

Mr. Schott went on a 10-minute run on Saturday, deadening both opponents’ balls and moving his ball and his partner’s ball in tandem. In the final, Bill Blakesley made a 90-foot shot through the far wicket to tighten his team’s match, the equivalent of making a court-long three-pointer in basketball.

“No, it’s not the longest I ever made, but it was pretty good. If you hit enough balls, a couple are bound to go through,” Mr. Blakesley chuckled after the match.

Ms. Collins, ECC president, said the club gives lessons to Boys and Girls Club kids on a twice-weekly basis. “I’ve only been playing for three years. My former tennis partner, Edie Blake, got me involved,” she said.

At 90, Edie is one of the stronger players in the league, Ms. Collins said. “She is out here every day, practicing and playing,” she said. Ms. Blake showed on Saturday that she has game, constantly finessing shots and positioning her ball well.

The ECC has been in operation since 1981, and has had several home fields in its 34-year life, finally settling in on a new field constructed by the Town of Edgartown in 2001 at the urging of late Island jurist Woody Tarlow, Mr. Schott said.

“The club was originally called the Edgartown Mallet Club, first organized by Ben Smith at the Point Way Inn in Edgartown. Later it moved to Earl Radford’s property on Chappy, and then in 2001, here at the Boys and Girls Club, thanks to Woody Tarlow’s help. There really wasn’t anything for seniors to do, and this filled the bill,” Mr. Schott said.

While the senior set dominates ECC membership ranks, “members range in age from their 40s to Edie here, who is 90,” Ms. Collins said. 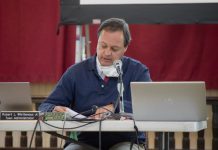