Wednesday night marked the  146th Grand Illumination in Oak Bluffs. Thousands of Islanders and visitors strolled along the Camp Meeting Association’s Trinity Circle and the streets and lanes and parks radiating outward.  The annual event is traditionally both a summer highlight and a signal that the season is winding down.

Though the festivities are strongly associated with the Campground, the event was not always set there. Wrote William Wilhomme in a story for the Times in 2012:

Tthe Grand Illumination’s intimate association with the Campground was not always welcomed by its mid 19th-century religiously inclined residents. Not only did they refrain from participating in the secular event, they erected a picket fence to try to wall themselves off from the world that had risen up around them.

Historian Chris Stoddard wrote, “In the eyes of many of the people attending the camp meeting, this new group took on the form of the devil and a threat to the more serious nature of the camp meeting.”

During the summers of 1864 and 1865, Mr. Carpenter rented a cottage within the camp-meeting grounds. He enjoyed the revival meetings so much that he wanted to purchase a site for permanent occupancy. After he learned that this was against the rules of the Camp-Meeting Association he bought a lot outside of the grounds the following year.

As president of the Oak Bluffs Land and Wharf Company, Mr. Carpenter and his associates soon transformed the undeveloped area into a popular summer destination place. The investors built hundreds of affordable cottages, the Arcade, the Pagoda, the Union Chapel, the Martha’s Vineyard Railroad, the Sea View House as well as the Waban, Naushon, Niantic and Ocean Parks.

The company placed its first advertisement for the newly named resort of “Oak Bluffs” in the July 5, 1867, Seaside Gazette.

“Home By The Seaside, Oak Bluffs. A New Summer Resort. One Thousand Lots for Sale. The Martha’s Vineyard Land and Wharf Company having purchased the beautiful grove together with a large tract of land, adjoining the Wesleyan Camp Ground, offer for sale, within the reach of all, lots in their beautiful grounds, called Oak Bluffs.”

The company sold over 800 lots in the first three years. The summer residents affiliated with the religious Camp-Meeting Association were unhappy with the success of this secular enterprise.

The May 23, 1868 Seaside Gazette reported, “During the present year the number of cottages erected on ‘this side of the fence,’ will fully equal, if not exceed those in Wesleyan Grove. The High Board Fence – between the grounds of the Camp Meetingers (sic) and Oak Bluffers is now in process of construction. We can think that the Camp Meeting Association will never regret this proceeding but once — and that regret will be for all time. It is carrying matters a little too far, and smacks somewhat strongly of Phariseeism.”

The development soon encircled the original religious campmeeting ground and so the main street was called Circuit Avenue. Describing the public reaction to this series of events, a historian wrote, “Inside the Camp Ground all was neighborly and hushed. Outside, quite suddenly, all was clamor and commerce – a town of skating rinks, merry go rounds, theatres and hotels. It was all so contrary to the spiritual business that drew the first pilgrims there, and so bewildering to them.”

Eventually they put up a picket fence to try to wall themselves off from the world that had risen up around them. The speculation and energy that created the town of Oak Bluffs still animates the spirit of the place today. And though the fence did not last, the Campground, right in the middle of it all, has managed to remain a place of almost miraculous stillness and peace in the midst of the bustle.

The first Illumination Night, on Saturday, August 14, 1869, was sponsored by the Oak Bluffs Land and Wharf Company. The Seaside Gazette reported, “The illumination and fireworks at ‘Oak Bluffs,’ on Saturday evening last, was a very fine affair. Chinese and Japanese lanterns were displayed in abundance, suspended from cottages and trees. There was a good variety in the pieces at the fireworks. The Foxboro Brass Band, brought here by the liberality of E. P. Carpenter, Esq., of Foxboro, discoursed fine music for the occasion. Several thousands of people of both sexes were out to see and hear.”

The initial festivity was called Governor’s Day in honor of Governor William Claflin who was on hand for the fete. Over the ensuing years, the Seaside Gazette referred to the annual event as the “Illumination,” and the identification remains to this day.

The event became more popular each summer. During the summer of 1873, the notables present included Vice-President Henry Wilson and Governor Henry Howard of Rhode Island.

The following year, President Ulysses S. Grant presided at the event. The Seaside Gazette reported, “In the evening the President and Party were driven around the principal avenues on the Bluffs, to witness the illumination and display of fire-works which had been gotten in his honor. The procession headed by the Foxboro Brass Band… The whole city was ablaze, or rather the Bluff’s ‘ward.’ The cottages of E. P. Carpenter, Dr. Tucker, the Holmans, and others on Narragansett Avenue, and a host of others all challenged the enthusiastic admiration of the multitude of spectators.”

The early Illuminations added to the alarm of the people “inside the fence” of the encroaching ideas of “commercialization” and a change to their quiet, isolated way of life. But with the passage of time, the wooden fence disappeared and the Grand Illumination was embraced.

William Milhomme, the former Massachusetts Archives Field Archivist and Deputy Historical Records Coordinator, is presently the Director of Volunteer Services for the Massachusetts Department of Correction. He lives in Foxborough. 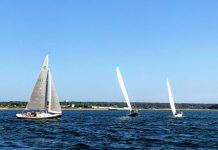 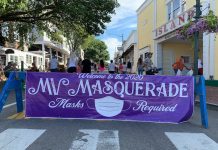 The Sip: A Field Guide to Orange Wine

The MVY Co-op: Food for the people, by the people

The Women Who Run our Farms