In a series of profiles, The Times introduces the men and women who farm on Martha’s Vineyard. For a complete interactive map of Island farms, go to bit.ly/MVFarmMap.

Tell me a little bit about your background in farming.

I first worked on a farm in 2006, in Colorado. I had been interested in permaculture prior to that, but hadn’t worked on a commercial farm. The farm I worked on was a vegetable CSA. I moved to the Island in 2007, and ran the youth hostel for three years. And while I raised some broiler chickens with Doug Brush, who is at Flat Point Farm, I didn’t actually do any farming until 2010, which is when I started the farm here.

How did you come into this farm?

In 2008, I got involved with the Island Grown Initiative mobile slaughter unit, and I used the unit to slaughter the birds that I had raised with Doug. The person that they had been working with on that decided that he wanted to start a business on the Cape, so he left and I got involved in processing other people’s birds.

I happened to be talking to someone else who was also just getting going in farming, and they let me know that the Land Bank was leasing the Tisbury Meadow Preserve, just down the street. I was able to secure a lease there, and I raised and slaughtered chickens there for the first two years.

In 2012 the owner of this property approached me. Craig Kingsbury used to live here, and his daughter Kristen owns it now. When she was taking care of him toward the end of his life, he said something to the effect of, “I’ve always wanted this to be a farm, it’s always been a farm when I’ve run it, keep it a farm,” so she was looking for someone to farm it for a while.

I feel really lucky to be here at a time when there are so many people who are interested in farming, both as consumers and as people who want to start it as a career.

Is there a story behind the name the GOOD Farm?

Yes. GOOD is an acronym, and it stands for Gardens of our Descent, which refers to descent as in down a hill. We live in a time when energy is becoming less abundant on an individual basis. One of the goals of my farm is to move toward a more permaculture-based system, as opposed to the systems that I have currently. That’s why I grow berries and trees, because I’m hoping to capture the excess energy of the moment and invest it in the future.

What are you working on today?

Is the slaughter process hard for you?

It’s interesting. I feel like most people I know who raise and slaughter their own birds started by raising birds and then moved to slaughtering them. For me it was the opposite, in that I was slaughtering them for other people first. When I first started slaughtering my own chickens, it was definitely a shift, but I keep in mind that I’m raising them for slaughter from the beginning, and I just try to give them the best life that I can.

What products do you offer?

The vast majority is meat: chicken, pork, turkey, duck, and guinea fowl. In addition to that, I sell some berries here and there. We have a couple of Asian pear trees as well — they are uber-delicious. There are also a couple of vegetable gardens on the property that Scottish Bakehouse leases, so they tend to them and use that produce.

Do you have a favorite part or process within your farming?

I really like the turkeys, to be honest. They’re incredibly goofy, and very inquisitive. The ducks are really great too.

To me the coolest thing is: If you take an animal and leave it in one place, it fouls the earth, and it becomes a real problem. But if you move it with a great deal of frequency, then the ground responds in kind. I’m somewhat color blind — I can see greens and reds, but I tend not to see them as vibrantly as other people — so there’s part of me that really likes that I can see that the grass is really green, because I don’t always notice that. I also really like to eat, so producing stuff that tastes really spectacular is nice.

How many animals do you raise annually?

This year, I’m raising about 4,000 chickens. It takes about two months for a chicken to reach maturity, and this is about the end of the season. I think about three-quarters of them have already been raised and slaughtered by now. I will bring about 40 pigs off to slaughter, and do about 250 turkeys and about 400 ducks in total. It’s a good amount.

Have you ever had an animal that you’ve become attached to?

Yes, when I first started breeding pigs, we had a piglet that was lame. We ended up bottle-feeding it for about a month, and it was so personal that we ended up keeping it around. His name was Pickle. We kept him around through the fall, but the problem with pigs as pets is that they never really stop growing, and they get really big.

Do you think that pigs have best friends?

You definitely see them playing with one pig as opposed to another.

Do you feel that you face any challenges specific to farming on Martha’s Vineyard?

As I’m sure anyone or any business here will say, the transportation issue is sort of a blessing and a curse. It’s a blessing in that it’s a captive market, and people are willing to pay more here than they will in Falmouth, but it’s a curse in that once you set up your systems, they won’t really work off-Island. I feel like most of the growth I do has to be directed to the population here. The year-round population here is really supportive, but obviously the volume skyrockets in the summertime, so the extreme seasonality here is very strange to try to cater to.

Where can we find your products?

Right now, I sell at the West Tisbury Farmers Market, which is just Saturdays now all the way through Christmas. Cronig’s carries my birds, and a number of restaurants on the Island sell them as well. I’m hoping to get a stand up and running by next season.

To contact Jefferson at the GOOD Farm, call 714-785-0112 or email thegoodfarmmv@gmail.com or find him on Facebook: facebook.com/pages/The-GOOD-Farm. 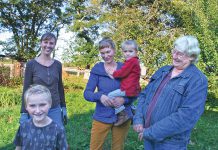 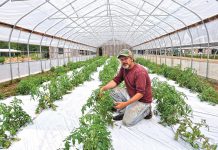 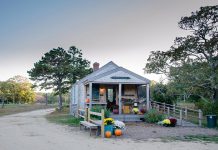 Meet Your Farmer: Lily Walter of Slip Away Farm