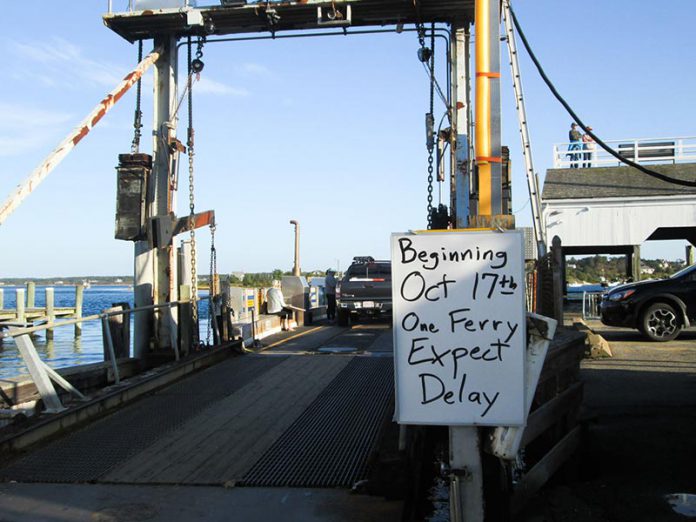 The Chappaquiddick ferry will operate with only one boat for about two months, starting Oct. 17, ferry owner and Captain Peter Wells told Edgartown selectmen Tuesday. He said delays should be expected.

Every two years, one of the boats is taken out of the water for maintenance and Coast Guard inspection, he said.

This year, it’s the larger of the two boats that’s due for a checkup. As a result, he expects a backup of vehicles and trucks along the staging route, which extends from Daggett Street to Simpson’s Lane.

However, selectmen decided to take no action on Mr. Wells’s request to rejigger the staging line, preferring to wait and see how it works.

Mr. Wells told selectmen that extending the painted line on Daggett Street to nearly connect with the line on Simpson’s Lane would eliminate the need for a police officer to help drivers navigate the gap, which occurs on North Water Street, breaking the staging line in two.

“It’s going to be important to have the extended line in place, but the problem there is the parking spaces,” Mr. Wells said. Extending the line would eliminate three parking spots in front of the library, which already suffers from inadequate space for cars. Mr. Wells suggested moving the parking spots up approximately 60 feet to salvage them.

“I don’t see that working this year until the library is gone,” selectman Margaret Serpa said.

Ms. Serpa said the street is already congested with the workers and vehicles. The Edgartown library is expected to move its collection to the new building sometime in November.

“We get a lot of comments all day about the difficulty of finding a spot,” Ms. Sherman said.

Selectman Art Smadbeck suggested playing it by ear and allowing the system to continue as it is, though without the summer-season police officer there to coordinate traffic.

Cars would then drive up to Daggett Street to see if there is room to wait in line. If the line is full, they would circle back to wait on Simpson’s Lane.

“We certainly could just let that happen,” said Mr. Wells. “But people swear, and people get pretty impatient. The police will be called.”

“If the police keep getting called down there, then we’ll have to come back here and rethink the parking situation,” Mr. Smadbeck said.

Police Chief David Rossi said he’d like to take a look at the situation in person.

“I just don’t want to have to put a guy down there,” he said.

The issue of traffic in front of the library was expected to be over, but delays in the library move have prolonged the issue.

“Maybe the other alternative is maybe you could wait a couple weeks to take the boat out and maybe make it not such a long period of time,” town administrator Pam Dolby said.

“Once the boat comes out of the water, I don’t have a lot of control over what the Coast Guard tells us to do. It will never take less than two weeks to get all the work done. Being a realist and also having some experience in doing that, you’ve got to multiply that by four,” said Mr. Wells. He added that he could not change when the boat was scheduled to be worked on.

Selectmen decided to wait and see how the traffic flow plays out.

“We’ll all be in touch; I think that’s the best we can do,” selectman and chairman Michael Donaroma said.