Mixing artistic media is a challenge, as famously expressed by actor Martin Mull, who quipped, “Writing about music is like dancing about architecture.” This sounds like a man who likes to keep his vegetables, meat cutlet, and mashed potatoes separate on his plate, but, in the hands of an innovator, one can not only dance about architecture, but also the tarot, the chakras (in Eastern philosophy and medicine, the seven basic energy centers that line up along the spine), astrology, polarity bodywork (a synthesis of chiropractic, osteopathic, and naturopathic balance), and life’s journey itself.

This is exactly what visiting artist, polarity therapist, and tarot card reader and designer Miriam Jacobs set out to do last weekend with a small group of Island women at the Peacegate Dojo in Vineyard Haven. We showed up out of intense curiosity and personal leanings: Writer Harriet Bernstein of West Tisbury has always been more than willing to lend her ballroom and jazz moves to anything having to do with dance; visionary eco-architect Anna Edey of West Tisbury was drawn to learning new modes of self-expression; writer, artist, and cultural doyenne Valerie Sonnenthal of Chilmark, an old friend of Ms. Jacobs’, knows exciting new work when she sees it, and sponsored the event; and this reporter was in attendance because, well, I’ve been hawking my tarot skills since the Renaissance faires of the 1960s in California, though ask me to dance, and you can bet I’ll run for the hills, had there been any hills off Peacegate Way in North Tisbury.

Ms. Jacobs put us at ease immediately with her unconditionally welcoming style. Soft afternoon light streamed through the windows of the high-ceilinged dojo as she showed us a display of the tarot cards she herself designed, “The Polarity Wellness Tarot,” a rich and contemporary retelling of the original centuries-old cards, with the major arcana denoted as ether, swords as air, wands as fire, cups as water, and pentacles as earth. No sooner was Ms. Jacobs’ deck on the market than Schiffer Publishing urged her to elucidate her mix of alternative health and esoteric practices in a new book, “Tarot and the Chakras: Opening New Dimensions to Healers.”

We got busy on the floor, each of us in turn expressing whatever probing question or mystery of being occupied our thoughts on that Saturday in October, then spreading out the deck on the floor and picking a single card. Ms. Sonnenthal read each meaning from Ms. Jacobs’ book; for instance, one participant’s pick of the Knight of Earth betokened the arrival in her life of a person who “moves forward slowly and methodically” and offered this advice: “Be patient. This person and/or influence can help you get things done without burning out.”

As we shared our burning questions, cards, and interpretations, our group morphed quite naturally into a gentle psychospiritual group therapy session. (Of course, my own panacea is a one-size-fits all: “Do you have a dog? You don’t? Well, get one!”)

And then the dance part arrived, in which we would express, individually, the message received through the handpicked card and group input. Uh-oh. And yet Ms. Jacobs built a beautiful and reassuring case for us to communicate through dance. She quoted Jung, “Dance is the language without words.” And she told us about dance innovator Anna Halprin, now 95, still dancing, still heading up the Tamalpa Institute in the Bay Area where Ms. Jacobs herself lives. “Anna says we’re all dancers, and that all movement is dance.”

Ms. Sonnenthal had spread a collection of hats, scarves, and other bric-a-brac against a far wall to use as props for our dances. And, mercifully, we were timed to limit ourselves to two minutes. Ms. Bernstein, having picked the Knight of Earth with its recommendations to go slow, chose a long black belt and dragged it ceremoniously behind her, then demonstrated a number of tai chi–style poses. Ms. Edey had brought her own props — a Grecian chorus mask of ceramic leaves, a clear and sparkling globe, and a flagon of water which she mimed sprinkling on herself and then the world: A perfect archetypal goddess of a green earth. I myself hid behind a colorful scarf, and rolled out steps from decades-old ballet lessons. Ms. Sonnenthal struck her own pose, stretched out on the floor, covered head to toe with bolts of purple, black, and gold textiles. Slowly she emerged from the layers, the figure of Woman Giving Birth to Herself.

We all enjoyed ourselves immensely, and Ms. Jacobs was impressed by the level of psychological, artistic, and literary acumen of her afternoon’s pupils. “Are all Vineyard women like you?” she asked us. “Of course!” we chimed in together.

The following day, Part II unfurled with a brunch and tarot readings by Ms. Jacobs at Ms. Sonnenthal’s Chilmark home. “Nine or 10 people turned out,” said the hostess, reached by phone this past Monday. “From 11 to 1 they had tarot readings of 20-minute duration given by Miriam.”

Now that Ms. Jacobs has added dance to her already exciting mix of tarot, polarity healing, chakras, astrology, and her gorgeous cards and new book, she describes her current life as a time of “exploration.” Judging by the gratified clients that came away from her two-part weekend workshop, the process is very nearly perfect as is. To find out more, log on to Miriam Jacobs’s website at polaritytarot.com. 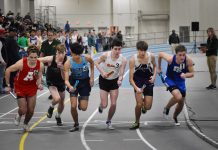 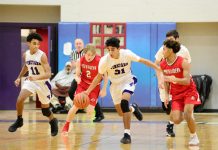