Once seasonal flavors hit the market, you can’t escape them. Sometimes they work, sometimes they don’t. When trying to push my creativity to develop new fall recipes, I thought of the classic flavor combination of apples and cinnamon. But let’s be honest, no one needs any more apple cinnamon desserts, which got me thinking: How about a savory application of these traditional flavors?

That’s how these Apple Cinnamon Pork Chops were born. Thick, juicy pork chops cooked in a tart apple cider glaze and topped with warm, cinnamon-spiced apples — it’s the perfect time to add them to your family’s menu. Not only is this meal tasty, but the recipe is so simple to put together, with fewer than 10 ingredients. If you can get local Macoun apples from Tiasquin Orchard in West Tisbury, it’s even better!

Preheat the oven to 400℉. In a cast iron pan, heat the butter and season the pork chops with salt and pepper. Over high heat, sear the chops on both sides and remove from pan.

Sauté the onion until aromatic and translucent, and add the brown sugar, apple cider, and cinnamon. Let this come to a boil and add the apples. Cook for 5 to 8 minutes, until softened.

Place the chops back in the pan and finish cooking in the oven, about 15 minutes, until internal temperature reaches 145℉. 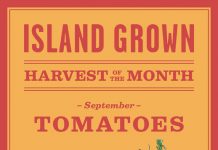 Filet mignon with a side order of biplanes