Although it might sound like a blast, I braced myself for an ordeal that only other seasick-prone folks can grok. My friend, journalist, turned social media manager Louisa Hufstader, invited me to join her, her brother Chris Hufstader, and her mother, the unsinkable (let us hope!) Margaret Steele, as the latter steered her CML 38-foot trawler from its summer mooring in Edgartown all the way over to hell and gone for storage somewhere in Buzzard’s Bay. As the crow flies, that’s not too far. Lolling along at 7 knots, that’s my own private version of swimming to Cambodia.

People who never get seasick are insensitive souls. They think we’re wimp-out artists. But here’s what we wimps have always known about the faintness and nausea that drops you to your berth or the deck, where you flop around like a poisoned dog, or propels you to the rail to vomit. You’d give up your noble dream of world peace if only the ship would reverse course, dock, and let you stumble to terra firma.

But here’s the crazy part: It doesn’t happen every time! So, like those of us who’ve been married more than once or twice, we keep on trying because, when it works — boating, that is — it’s the bee’s knees and the cat’s pajamas.

Team Steele & Hufstader and I met at 9 am on the docks alongside the Edgartown Yacht Club on Thursday, Oct. 16, which, you may recall, was the prettiest darn day of this particular century — blue and gold, air soft, birds still around to twitter their pleasure. Capt. Rick Harrington met us in the town launch, assisted in the cuteness factor by his 3-year-old granddaughter Kira in a pink jacket and purple sneakers.

The launch jaunt started out with a small mystery: Chris (and just BTW, he’s an avid sailboat racer and Oxfam hand) revealed he’d been fishing earlier and spotted a fellow actually tromping all over his mom’s trawler! Chris had bellowed, “What the hell do you think you’re doing?” The guy said he’d heard Margaret’s boat was on the market, and wanted to check it out. He asked the price. Chris told him. The looky-loo shouted, “Tell her it’s sold!”

OK, that was easy.

We boarded and stowed our stuff in the homey cabin, then headed to what I thought of as the “upstairs,” but which Louisa called the “flying bridge.” Margaret switched on all sorts of dials and gewgaws and pulled back on the dual throttles. We motored past the Edgartown littoral — yes, that’s a word you’ll find in Nathaniel Hawthorne, but no one actually uses it in conversation; I can’t even tell you how to pronounce it — as we watched the great and glorious captains’ houses of Edgartown recede in the background.

The surface of the sound roiled as we chugged and bounced north by northwest. The three sailors pored over a book of charts the size of a small coffee table. Instantly I understood why before these waters were plumbed and mapped, so many vessels smashed up against the rocks and shifting shoals of this part of New England. On the charts, white channels wove and undulated around globs of other bodies of water, all of it x’ed up with indecipherable markings. As one intrepid matey steered, another read accounts of what lay ahead: stuff like, “The red runs off Nobska, and we’re steering 3-2-5 c.o.g.”

And then, glory be! out in Nantucket Sound where there was no one around to hear us scream, they let me steer! I learned right off it’s hard to make those Volvo Penta engines respond to your hands on the helm. You’re told to veer right, so you twist slowly as you would a car wheel. Nothing happens, so you spin more and all of a sudden the boat is doing what they call in ballet a fouetté turn. Whoops! Then you overcompensate in the other direction.

Margaret laughingly called for us to look at our wake. Sure enough, I’d churned up a zigzag design across the sound. You would have thought Bugs Bunny had been asked to drive. At last, as we pulled closer to the watery downtown of Oak Bluffs, I was, you’ll be happy to hear, relieved of duty.

It wasn’t long before we approached the thronging entrance to the Woods Hole Harbor. Team Steele & Hufstader pored over the charts, and that’s when I learned it’s all about buoys. Red are “red nuns” ‘’cause of the funny headdress nunny sort of top, and green are green cans because some nautical lout couldn’t come up with a quainter label. And here’s the straight poop from the deck: Steer to the right — or, ahem, starboard — of the red, and to the left — port — of the green.

All at once we veered so tight a course through the nuns and cans that Skipper Margaret asked Louisa to bring up the life jackets. Was it time to pray to the patron saint of boating? And who was that, by the way? Should have Googled it before I left the house.

Margaret, however, looked unconcerned. “These are dangerous waters,” she observed the way Mr. Rogers might have said, “Be sure to tie your shoes, kids.” Louisa returned with the PFDs — personal floatation devices, another cool nautical term; man! was I tracking! – and she quoted an old maritime squib, “When things go wrong they go wrong very fast.”

We ploughed into the great sea of water that flows before Buzzard’s Bay, the surface calm, breeze gentle, and the low rays of autumn sunshine sparkled in that way they do when all’s right with the world. Smatterings of terns chirped, and we spied an osprey nest atop a buoy.

Margaret bought Illusion in 2001 and has lived aboard it every summer when she rents out her gorgeous captain’s house on Cottage Street in Edgartown (you can read all about it in Chapter 18 of my book “Haunted Island”). She’s been sailing since her dad first took her aboard his own sloop when she was 3. Much much later, to celebrate her 75th birthday, she plied the Eastern Seaboard up to Canada for five whole weeks, but now she believes the time has finally come to hang up her skipper’s cap and sell her beloved trawler.

We cruised for four heavenly hours over our gorgeous bays and sounds and coves before we moored in slip S-8 at Kingman Yacht Center in Cataumet, past Scraggy Neck in Buzzard’s Bay.. Margaret’s friend Dick Coveney of Falmouth picked us up and dropped Louisa and me at the Palmer Lot in Falmouth in, like, 15 minutes. How could we be so close when we’d sailed so far?

Journeys by water lend one a whole new subjective experience of time.

Epilogue: I didn’t get seasick. I had one of the best days of my life. I wish Margaret Steele would adopt me, but she already has two additional kids, in excess of Louisa and Chris: Elizabeth in Edina, Minn., and Alice in San Francisco.

Post-Thursday’s trip, I’d love to own a boat, but I don’t think I could ever learn if red means starboard or “we’re having spaghetti Bolognese for dinner,” or if green cans are something you kick down the road, I mean channel. Those of us who never know if we’re coming or going should never be put in charge of a ship.

Oh, and St. Brendan is the patron saint of navigation. 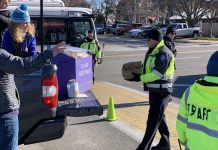