The construction process for the six-unit affordable rental apartment building on Water Street in Tisbury began Tuesday morning with the demolition of the uninhabitable house on the property. By the end of the morning, on the site where a dilapidated house covered with colorful artistic graffiti once stood, all that remained was an empty lot and a pile of timber.

Several onlookers stood by the site as the wooden building was torn down. One of them was Bill Magee, a lifelong Islander whose family owned the house prior to its sale. He said his family bought the house, which was built in the early 1900s, in 1959. Mr. Magee said he lived in the house from age 9 to 18. But he wasn’t too emotional about the structure coming down.

“It’s a rotten old building,” he said. “It was time for it to go. It had its useful days, that’s for sure.”

He was happy to see it used for affordable housing.

The Island Housing Trust (IHT) began planning the Water Street project after it received a donation of the house and property, sandwiched between a car-rental service and Stop and Shop, in 2012 from Cronig’s Market owner Steve Bernier. Mr. Bernier bought the property after it had been condemned. An incorporated deed restricted all or part of its use to affordable housing.

A design competition was held during the summer of 2013, with the goal of designing a building that will provide affordable in-town rental housing, and serve lower-income residents with critical housing needs. Following consultations with town residents and boards, the IHT selected the design of Terrain Architects of Vineyard Haven for the project.

Farley Pedler, of Farley Built Inc. of West Tisbury, was hired as general contractor through a public bidding process for the $1,342,300 construction project.

IHT applied for a comprehensive permit from the ZBA through Chapter 40B, a state statute that enables local zoning boards of appeal to approve affordable housing developments under flexible rules if at least 20 to 25 percent of the units have long-term affordability restrictions.

The Martha’s Vineyard Commission (MVC) reviewed IHT’s proposed Water Street affordable housing as a development of regional impact, and approved it in July 2014.

The Tisbury zoning board of appeals (ZBA) unanimously approved the project in October 2014.

In a phone interview with The Times on Monday, Mr. Pedler said that work will begin after demolition.

“Once the building is removed, we’ll immediately begin our site work and excavating for the foundation,” Mr. Pedler said. The foundation work will be completed by the end of the month, he said.

“It’s a modular construction, so the modulars are getting delivered at the beginning of March,” he said.

The team will work through the winter, with the goal of completing the building by June 15. Mr. Pedler said he hopes to have tenants move in by July 1.

“It will be a net-zero building, meaning that it’s going to be a very energy-efficient building, and will have solar panels to offset any energy use,” Mr. Pedler said. “We’re just really excited for a project like this for the town of Tisbury.”

The apartments will be rented for $750 to $914 to working Island families and individuals earning $21,000 to $43,000 or less. Once constructed, the Dukes County Regional Housing Authority will provide rental and property management services.

On Tuesday, Mr. Pedler stood near the demo site taking pictures, and remarked that it was amazing how quickly the structure was coming down. “It’s also exciting,” he said. “It’s not just like it’s coming down and going away; we’re going to have the opportunity to rebuild it. We’re just really excited for new beginnings here.” 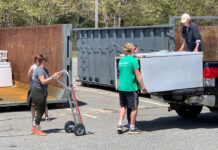