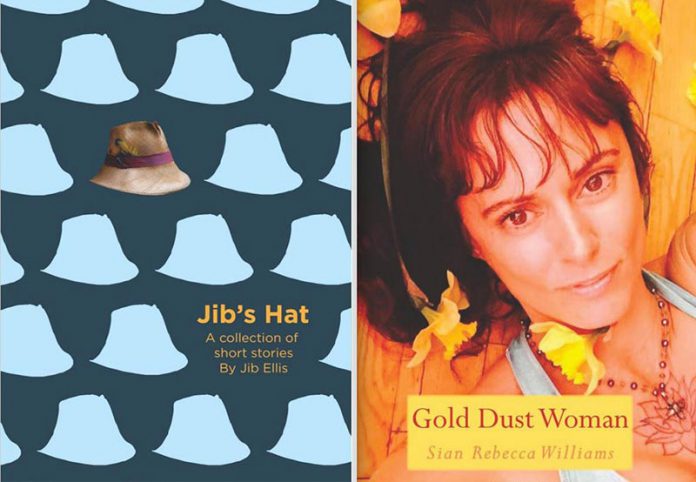 If you’ve had the pleasure of knowing the decades-long Islander Jib Ellis, nowadays an older gent with boyish charm and undoubtedly, when he was a boy, possessed of a certain older-gent charm, then you’re accustomed to his taking you down his own sublime rabbit hole of ensorcelling stories. At the same time, his keen blue eyes and wry grin home in on you as he tells you all about yourself, and he seems to know you in a way you’ve never been appreciated before.

And now, whether or not you’ve ever met this wickedly clever man, you’ll be handed the Essential Ellis on a platter as you read his new book of stories, “Jib’s Hat” (Veranda Publishing, $12). Some are fiction, some pure memoir, and it’s hard to believe that even the fiction isn’t really just slightly recalibrated real life with the names, and even genders, changed for the sake of twisting the kaleidoscope of Mr. Ellis’s Technicolor life one flourishing view at a time.

You’ll meet the mad dancer Daphne: “She and I fought all the time, with fierce passion and rebounds of equal zeal. In the late 1970s, we both lived in Boston and wildly careened around the old Ritz-Carlton café and bar, long after it was a good idea, but we were into performance art. Me in my white linen suit set off by white canvas boat shoes and she, a ballerina, in more silk than many small countries could produce in a week, we shone.”

It is no exaggeration to say that any given sentence that Jib Ellis puts down on the page will be rich with interest, texture, wit, and irony, or all of the above. The stories touch down in the oddest places, such as a cartographer’s-cum-spy outfit sequestered in “a converted restaurant, with an iron rooster weathervane on top.” The daughter of a dead-end major general attends the funeral of Dad’s pet army mule as “the reports of seven carbines cracked the sky.”

Jib Ellis has his own cherished stories that he would have told you along the line, had you met him before you picked up “Jib’s Hat”: There’s the one in which he finally understands that all this skinny-bitch stuff about something called “Pilates” has nothing to do with food from a deep-fryer, and the one where he discusses thongs with a pair of young women behind a counter, unaware that the old school word for flip-flops has changed into utter unmentionables. “I can’t stand them,” he tells the shocked girls. “The things hurt me. I think they’re actually painful.”

My favorite story in the collection is “The Troubles,” about an odyssey of two American buddies who drive from Belfast to Dublin and back again, with checkpoints at the border and an hysterical sense that things could go kaboom! at any moment: We forget that Western cultures have produced their own violence. Within the saga — ostensibly an excursion to buy horses — an improbably romantic love story arises which stirs in the hero a yearning to save the life of a pretty lass. How better to get those testo-erotic hormones going? But the tale is aptly titled “The Troubles,” and a happy ending is hardly guaranteed.

Mr. Ellis is a journalist, a columnist, and for a while back in the early 1980s published a delightful magazine called Planet Vineyard, in which he was able to showcase a great many of his zany friends. Recently he produced a novel called “Bandstand: The Search for Oak Island Gold,” in which two former operatives hatch a plan to go after a hidden fortune on an island in Nova Scotia. Each page is packed with legends, alchemical mystery, pirates, and dangerous caves but, again, the real treasure map is in Ellis’s, as Henry Fielding once labeled it, “felicitous way with language.”

For fans of Sian Rebecca Williams’ glamorous poetry, her new collection “Gold Dust Woman” (Pandavine Post, $19.95) will put them in touch with the full canon, including my personal favorite, “Year Round Island Girl,” which includes these lines that surely resonate up and down the hearts and spines of young female washashores who arrived on impulse and stayed without a decent plan for a grownup life: “Moved in with your island dude/ Handsome, rugged, sexy, rude/ In some shack, not winterized/ Snooping landlord, you despise… You stuck around that first winter/ Should have given you a hint of/ Long and lonely dismal nights/ No more work, those awful fights…” Yow! Now there’s a brrr! that goes deeper than the mere chill of sleet and snow.

Ms. Williams grew up in Manchester, England, has lived on the Island for nearly three decades, producing five kids, a yoga practice, a novel-in-progress, and a stack of poems which she shares in venues such as Pathways at the Chilmark Tavern. In the bio at the back of “Gold Dust Woman” she describes her “house in the woods with two daughters, two dogs, and two cats.” Sounds like the perfect setting for a seeker and a poet.

Ms. Williams’s lines are haunting, biting, each one a cri de coeur. They should be read, not all in one rush, but singly, and aloud, as the poet herself does in her engaging English accent, bringing an added snap to this life into which she’s plunged heart and soul, unceasingly surprised to find herself on this odd outpost in northeastern New England.

Taking Jib Ellis and Sian Rebecca Williams together (their books, by the way, are available at the Bunch of Grapes), it’s startling how varied and dramatic, appealing and appalling are the ways each human life plays itself out: We’re lucky to have artists such as these to elucidate the situation of being here on this planet, not that either of them have figured it out any better than any one of us.

“At a loss for exactly what to do, I went out and bought a green velvet suit,” writes Mr. Ellis. “— The ghosts of maidens/ Who offered their white swan necks/ To kings, or the noose —” muses Ms. Williams.