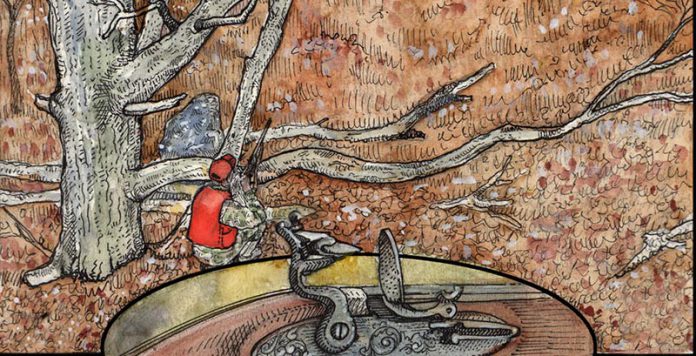 Hunt or fish long enough, and you will begin to repeat the same stories, complaints, and dreams so that even your most patient friends, or spouse, will ask you to stop.

My wife, Norma, stopped listening to my hunting stories a long time ago: “Blah, blah, blah, then the deer did this and then the deer did that, and then I shot it — oh no, I missed it,” is pretty much how she sums up the evening telephone conversations that take on a ritualistic quality in our living room over the course of a hunting season.

Prior to my hesitant adoption of texting technology, it was customary for my friends and me to actually talk to each other most every evening about that day’s hunt — what we saw or did not see, and any success we might have had.

I still have phone conversations, but I am just as likely to receive a brief text: “saw nothin … doe too far away … goin in the morn?”

The one benefit of texting is that a hunter can communicate with nearby hunters quietly — assuming he or she remembers to silence the chime that will send any deer fleeing. I have found that a text message is quite a handy way, when I am fortunate enough to have shot a deer, to summon help to drag it out of the woods.

My fondness for the English language and unenthusiastic embrace of smartphone technology moves me to pay attention to spelling and punctuation when I send text messages. I am clearly in the minority.

Eons ago, hunters in pursuit of game communicated via grunts. Well, we have come full circle. The equivalent of the prehistoric grunt is the modern text message.

AAR (at any rate), with days to go before the end of the 2015 deer hunting season that began on Oct. 19, I was determined to bag a deer with my flintlock rifle. I told Alley Moore about my plan — we were actually speaking to each other — and Alley reminded me, “You’ve been saying the same thing for years.” Et tu, Alley.

A quick check of past columns finds that I first began talking about my flintlock goal 15 years ago, when the so-called primitive firearms season lasted six days rather than 16, and I first had the opportunity to hunt with a Pennsylvania long rifle manufactured by the Thompson/Center Arms Co., a small manufacturer in New Hampshire, since acquired by the famed Smith & Wesson Co. of Springfield.

I still have the rifle, which weighs 7.5 pounds, is 45 inches in length, and fires a 50-caliber bullet from a barrel with a 1:66-inch twist. It differs little from the type of weapon used by Captain Meriwether Lewis and Captain William Clark, leaders of the famed Corps of Discovery, during their hazardous journey to the Pacific Northwest and back between 1803 and 1806, which gave early American colonists their first glimpse of what lay beyond the Mississippi River.

Basically, flint striking metal was the method used to ignite a powder charge in firearms from the early 1600s until the introduction of the percussion cap in the mid-1800s. After a charge of powder is poured into the muzzle of the barrel, a lead ball is placed on a lubricated patch that helps seal in gases, and the ball is pushed down the barrel with a ramrod until it is firmly seated on the powder.

Too little powder in the priming pan and there may be no shot when the flint strikes the hard steel plate known as a frizzen, creating a shower of sparks. Too much powder can cause a significant delay before the main charge ignites, which can affect aim. Anyone who fires a flintlock gains a new respect for such phrases as “flash in the pan” and “hang fire.”

In season, most hunters, me included, use muzzleloaders that incorporate modern technology, will reliably fire each time, and with a good scope can take a deer out to 150 yards, sometimes farther.

According to “Undaunted Courage,” Stephen E. Ambrose’s account of the Lewis and Clark expedition (Simon and Schuster), Captain Lewis stopped at Harpers Ferry, Va., site of the U.S. Army’s arsenal, on March 15, 1803, to pick up for his party what were then the top-of-the-line armaments, 15 muzzle-loading, flintlock, long-barreled rifles, sometimes called “Kentucky rifles” but more properly “Pennsylvania rifles.”

“The Model 1803 delivered a lead slug on target with sufficient velocity to kill a deer at a range of about a hundred yards. An expert could get off two aimed shots in one minute.”

Early Thursday morning on the last day of the year, I drove to Chilmark in the darkness, a light mist on my windshield, the remnants of a shower that weather forecasts said would soon cease. My plan, worked out over hours of mental tumbling, was to find a good spot to sit on the downwind side of a shallow, relatively unobstructed ravine that ran north-south and appeared to provide a good route for deer moving to and from bedding areas.

As I prepared to leave my truck, I considered bringing along my modern scoped muzzleloader, in the event I saw a deer at some distance. Committed to my plan, I quickly discounted the idea.

I had a short walk along a dirt road in the lifting darkness and then walked along a path that entered a break in a stone wall. I paused. The wall overlooked a saddle I knew the deer sometimes used. So often in fishing and hunting we second-guess ourselves. “Stick with the plan,” I told myself.

I walked up the side of the ravine and found a large, gnarly, well-branched oak that provided a perfect vantage point and gun rest. Then I waited.

Several weeks ago, I read a gun-control opinion piece published in the New York Times (Dec. 19, “The Deer in My Sights,”) by Seamus McGraw, in which he described stalking a deer for more than an hour in the Pennsylvania woods with his 50-caliber flintlock, only to get within 30 feet of it — a hard-to-believe scenario for anyone who has tried to walk within even 100 yards of a deer, let alone 30 feet — only to put his weapon down and clap his hands to send the deer scurrying into the woods.

“The simple fact was that I was too poisoned by bitterness to use my weapon honorably,” he said, referring to recent news reports detailing violence around the nation and his disdain for “Second Amendment extremists in the upper echelons of the National Rifle Association and in Congress who have no clue what the real purpose of a gun is.”

I was untroubled by such thoughts on the last day of the season. If a deer walked within 30 feet or 30 yards of me, I planned to shoot it. Not because I was less sensitive than Seamus (well, maybe by New York Times standards), but because I think the gun debate has little to do with hunting and much to do with differing American cultures and the willingness of good people on all sides to talk past each other.

My thoughts that morning were focused on the ground in front of me as fog rolled through the trees. The snap of a twig drew my attention to my left, where a large doe was walking up the ravine. I watched as she started to move leisurely up the other side of the ravine, walking away from me.

According to Mr. Ambrose, Captain Lewis was an excellent shot, particularly when using his walking stick as a rifle rest: “If the target was within a hundred yards and bigger than a mouse, he usually got it.”

I had a large branch in place of a walking stick, and knew I would be hard-pressed to hit a barn door at 100 yards.

The doe was about 70 yards away. I rested the rifle on the branch, centered the metal sights on the deer and pulled the trigger: There was a loud click as the flint struck the frizzen. Not good.

The deer looked in my direction, alert, ears and tail twitching, sniffing the air. I had the advantage of the wind, a critical factor when hunting deer, which possess an acute sense of smell.

I quickly wiped the damp powder from the flash pan and added a fresh charge of priming powder. The doe resumed feeding in a new direction that brought her closer to me. She was about 40 yards away as I tried to calm my excited breathing in preparation for pulling the trigger.

I fired. The deer fell on the spot. It pays to stick with the plan.

Beginning in 1979, Glenn Wolff’s pen-and-ink illustrations accompanied West Tisbury resident Nelson Bryant’s Outdoors column in the New York Times. The evocative images and attention to detail traced the currents of the written word in a collaboration that delighted New York Times readers for 26 years and was renewed in The MV Times (November 2012, “Writer Nelson Bryant recalls a lifetime in the hunt,”  January 2013 “It may be winter, but white perch lure anglers on Tisbury Great Pond” ). For more information go to glennwolff.com.