“He was a bold man who first eat an oyster.” — Jonathan Swift

Bold is an understatement, for I can’t imagine the day someone broke open an oyster and decided that slurping the inside of it was a good idea. But thankful we are to that one man, who saw past the hardships of cracking open the rough shell of this bivalve mollusk and discovered one of the most decadent treats the world had ever experienced.

To celebrate not only the oyster, but the men and women who work hard to harvest these creatures, the Harbor View Hotel annually hosts the event “Romancing the Oyster,” where a portion of the ticket sales benefit the Martha’s Vineyard Shellfish Group. Guests had the opportunity to support the Shellfish Group while trying the variety of oysters offered on-Island from Signature Oysters, Spearpoint Oysters, D&E Oysters, Roysters, and more.

“It was a wonderful evening showcasing the Island’s community of oyster farmers,” Andrew Bartlett, general manager of the Harbor View Hotel, said. “We would like to thank the farmers, Martha’s Vineyard Shellfish Group, and the guests who came out in support, braving the weather to help raise awareness for sustainable oyster farming.”

Guests had the opportunity to speak with these local fishermen as they shucked, learning about the harvesting process and favorite ways to eat the bounty. Some were proponents of smoking oysters on the grill, while others were fans of the classic Oysters Rockefeller. As a consensus, they all preferred to consume oysters raw, as a tribute to the gifts of Mother Nature. For those who preferred cooked oysters, Harbor View executive Chef Caleb Lara prepared a variety of dishes that were worth diving in the ocean for: Traditional Oysters Rockefeller, Grilled Oysters, Oyster Stew, and Oyster Po’Boys. All of these preparations showcased the oysters in their full glory. Guests raved about all of the food, but were mostly impressed by the Oysters Rockefeller: oysters broiled in a light cream sauce with spinach and seasonings. The night was a total hit for oyster lovers on Island, and an event to warm up the winter season.

The Martha’s Vineyard Shellfish Group is a nonprofit organization comprised of the shellfish departments of the six Island towns. For over 35 years, the group’s community-based resource management program has sought to preserve and expand the Island’s traditional shellfisheries. The key to this effort has been the operation of a solar-assisted shellfish hatchery, the application of innovative aquaculture technology, and a continuing vigilance to improve and maintain the good surface water quality crucial to a viable shellfish industry. To learn more, visit mvshellfishgroup.org. 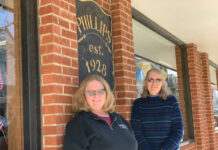