This is the first in a series of articles that will feature unique and old trees across Martha’s Vineyard — one tree for each town. Each article will relate the natural history of the tree to historical events that the tree has witnessed.

The Quansoo oak tree is a white oak, Quercus alba, a species that is native to the Island. The white oak features leaves with lobes that are rounded, rather than pointed, and flaky bark that is generally white in color. According to the U.S. Forest Service, the white oak grows commonly throughout eastern North America, with a range that stretches from southern Maine to eastern Texas. On Martha’s Vineyard, white oak trees are common as well, and they are found from Aquinnah to Chappaquiddick. White oaks produce some of the best lumber of any American hardwood. White oaks felled at Cedar Tree Neck Sanctuary were used to replace the rotten sills, beams, and joists in the historic Hancock-Mitchell House at Quansoo Farm.

The Quansoo oak, however, is no typical white oak. From north to south, the crown of this tree measures 90 feet across. The sheer spread of the crown may make this tree an Island record, yet its appearance is what makes it so remarkable. With grotesque curving limbs, the tree appears more octopus than oak. From a central circle of what once was a stump, some 11 serpentine limbs radiate outward. These limbs start out stout, but taper in girth as they snake outward, terminating ultimately in thin, bony twigs. As each limb extends, it curves up and then down, sometimes bends into the soil and then reemerges, reaching back toward the sun. Though the highest branches of this tree may be about 20 feet high, the tree generally takes a prostrate form, as if a giant squid had been washed upon the shore, turned upside-down, tentacles wriggling, and then turned into wood. The tree is healthy. Here and there, a few limbs have died and dropped onto the ground. As the tree is a white oak, however, the tree was spared the onslaught of the cynipid wasp, a pest that killed some of the black oaks nearby but left the white oak unscathed.

It is difficult to determine just how old the tree is. Two attempts at coring the tree found the limbs to be hollow inside. The rings are very tightly spaced, showing that the tree grows in girth just the smallest fraction of an inch each year. The wood itself begins to rot as one approaches the hollow, empty core of the stem, and the color of the wood changes from a creamy white to an earthen brown.

At the very least, this Quansoo oak is a second-generation tree, and may well be generations older. The ring of stems protrudes from a circular center. This indicates that this single, multiple-stemmed tree sprouted from the stump of an older tree. When cut, a white oak will sprout from its stump. When one spots a multiple-stemmed tree in the woods, that tree sprouted from the stump of an earlier one. When one spots a single-stemmed oak, that tree sprouted from an acorn. Eventually, each oak traces its lineage to one acorn. Due to stump sprouting, however, it can be impossible to tell just how old a particular tree is. Only the roots of the tree know for sure. This sprouting and resprouting white oak may be hundreds of years old. It may even be more than a thousand years old.

During research for a forthcoming Yale University Press book titled “A Meeting of Land and Sea: Nature and the Future of Martha’s Vineyard,” David Foster, director of the Harvard Forest, mapped out areas of intact ancient forest on Martha’s Vineyard. Many people with a long history on the Island recall a more open, pastoral landscape, the remnant of more extensive agricultural use in the 18th and 19th centuries. Indeed, photographs, maps, and memories testify to this open character of much of the Island landscape. Yet a great portion of the landscape has also always remained wooded, even during the heyday of farming.
Mr. Foster has termed these areas “ancient woodlands.” They are indeed ancient; many of these areas have remained in forest cover for nearly 12,000 years. He has also mapped these areas over time, and has determined the sections of the island in which the ancient forests still exist. In Chilmark, ancient forests can be found in the woodlands along Ridge Hill Road, and south and west of the Tiasquam, in some small areas east of Menemsha Pond and between Tabor House Road and Tea Lane, but the most extensive swath of ancient woodlands lies in the woods of Quansoo and Quenames. This woodland extends south from South Road to Sheriff’s Meadow Foundation’s Quansoo Farm.

The southern extent of this ancient woodland is the so-called “picnic woods” section of Quansoo Farm. Here, nearly all of the larger white oaks and black oaks are multiple-stemmed stump sprouts. This is a maritime forest type, where the strong winds and salt air have sculpted the trees into twisting, spreading, muscular shapes — though none as spectacular as the subject of this article. In between the oaks grow straighter, more slender trees — hickories and sassafras, with viburnum and huckleberry bushes beneath.

One may reasonably speculate that this tree, or perhaps this tree and its predecessor or predecessors, have witnessed at least 300 years of Island history at Quansoo. What follows below are notes on events in Island history that the tree lived through. The events noted below are based on the research of Myron Stachiw, who is preparing the National Register of Historic Places nomination for the Hancock-Mitchell House, and on conversations with the late Donnie Mitchell.

1792 One might logically assume that the Quansoo oak began life in its current form when its predecessor, perhaps another mighty, spreading white oak growing on the roots, was felled for firewood. Why? In 1792, 24-year-old James Hancock bought a one-acre parcel from Thomas Cox, a laborer and mariner who lived just off to the north with his wife, Sarah, a seamstress, and their children. Sometime in 1792 or 1793, aided by teams of oxen, James moved the Hancock-Mitchell House to its current site at Quansoo Farm. The surrounding land was owned by various members of the Mayhew and Hancock families. Each house in the area would have needed a copious supply of firewood, and it is quite likely that at one time in its long life, the Quansoo oak was felled for firewood. Yet once felled, with a complete, mature root system, the Quansoo oak sprouted vigorously to the sky.

1804 The Quansoo oak was now a set of sturdy young shoots, perhaps an inch each in diameter, aiming upward and beginning to branch. In this year, James Hancock died, leaving behind his five children and his wife, Elizabeth, pregnant with their sixth child. Elizabeth moved to Westerlo, N.Y., and Samuel Hancock, brother of James, ultimately took ownership of the farm, buying out his brother’s estate and his heirs.

1871 Stout limbs, now perhaps six inches in diameter, stretched outward to all points of the compass. They snaked along the ground and curved upward toward the sky, beginning to adopt the form that now makes the tree so distinctive. The Hancock house nearby has become the Hancock-Mitchell House, as Sophronia Hancock, granddaughter of Samuel Hancock, had married whaling Captain West Mitchell. West Mitchell was master of the bark Massachusetts, and was sailing off Alaska with the rest of the New Bedford whaling fleet in pursuit of the bowhead whale. The fleet lingered too long in the Alaskan waters, though, and 33 of the ships, including the ship of West Mitchell, were crushed in the Arctic ice in what became known as the Whaling Disaster of 1871. Captain Mitchell and the 1,200 men of the fleet escaped over the ice to safety.

1938 The waves of the Atlantic Ocean swept around the base of this majestic, spreading maritime oak. The storm surge of the Hurricane of 1938 drove the water of the sea far onto the low-lying Quansoo plain, sweeping over the marshes and through the picnic woods, and up to the very doorstep of the Hancock-Mitchell House. Just 12 years old, young Donnie Mitchell had already moved out to work at the Mayhew farm up the road, now the Grey Barn Farm. He recalled the water at the door and the hapless sheep, strewn about in the trees. The hurricane leveled most of the buildings at the Quansoo farm, save the main house and a couple of outbuildings.

2005 The Quansoo oak was now a mighty tree, arching in its current squidlike form over land beneath. Its larger limbs lay half-submerged on the ground, as the tree has quite nearly buried itself through centuries of fallen leaves that have decayed into an acidic dark soil. In Gladwyne, Pa., Florence B. “Flipper” Harris died at the age of 87. Over her lifetime and with a final bequest, she donated the 146 acres of Quansoo Farm — including the Quansoo oak — to Sheriff’s Meadow Foundation for conservation.

2016 On Jan. 6, 2016, the National Oceanic and Atmospheric Administration announced that it had discovered, in the Chukchi Sea off Wainwright, Alaska, the wrecks of the Gayhead, George, and Concordia — all vessels from West Mitchell’s whaling fleet, lost in 1871. The Quansoo oak lay dormant for the winter, awaiting the spring, and preparing to resume its role, witnessing history and documenting each year in its record of wooden rings.

Adam Moore is executive director of the Sheriff’s Meadow Foundation and a graduate of the Yale School of Forestry.

For a high resolution panorama of the tree, click here 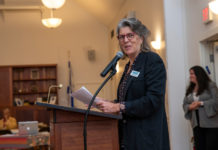