If you missed Philip Weinstein’s talk on Toni Morrison’s Pulitzer prize-winning novel “Beloved,” the talk will be broadcast today at 10 am on MVTV, channel 13. Mr. Weinstein’s talk, which took place on March 3 at the Katharine Cornell Theater,  launched of a new series of monthly book talks called Islanders Read The Classics. In April, John Crelan will discuss Mark Twain’s “A Connecticut Yankee in King Arthur’s Court,” which is one of the world’s first stories about time travel. In 1989, a reviewer in The Boston Sunday Herald wrote, “Of all the extraordinary conceits that have germinated in his fruitful imagination, nothing more delicious has ever occurred to Mark Twain than that of running riot among the legendary times of our ancestral race by placing ‘A Connecticut Yankee in King Arthur’s Court.'” John Crelan has taught English and creative writing at Emerson College and Suffolk University. Mr. Crelan’s talk will take place on Tuesday, April 19, at The Oak Bluffs Library at 6:30 PM.

Islanders Read the Classics is sponsored by The MV Times and the Martha’s Vineyard Library Association. For a full schedule of IRTC broadcast times, check mvtv.org. 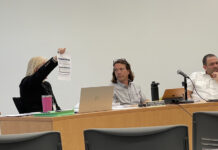