It’s with great sadness that we report that Megan Alley’s husband, Dennis, died this week. Holly Nadler will be writing the Oak Bluffs column in Megan’s place.

Do not panic. Megan Alley will be back. I’m just subbing for her, but please! No talking at your desks while I discuss the lesson plan for today: the signing of the Magna Carta.

Naw! It’s me. Some of you might remember me from the O.B. town columns of the ’90s, and the same columns in That Other Paper, the Vineyard Whatchamacallit. I adored the years spent recording our beloved town’s events and overall, well, if you’ll permit me the expression, zeitgeist. All these years later, hardly a day goes by when I don’t rue being unable to comment on odd occurrences, such as last year in the spring when the Campground cottages were still closed up tight as a gingerbread drum, and a young Japanese couple stopped and asked in wonderment, “What happened here?!” They saw these doll houses, abandoned and yet impeccably maintained, and they thought this was a sort of Victorian Pompeii. Had a volcano erupted? A plague descended? I assured them these cottages were fully occupied in the summer, but they didn’t believe me.

So what’s going on this week that I absolutely must schmooze about with you, now that I’ve got my one chance before Megan gets back and says, “Look what a mess you’ve made of my column!”?

First, certainly, I feel compelled to grumble about how the spring has come and gone, and yet we have no spring here, none to speak of; isn’t that what we always carp about? And it’s not just the brrrr weather that made us keep our wool sweaters active long past their shelf date. What bothers me — and it gets worse every year — is that just when we should be swooning with the sweet chirpings of returning birds, we’re instead treated to the drill of buzz saws, the lumbering motors of 10-ton trucks, the brrriipp! sounds of shingles being nailed to walls, and the yammers of all the gas-powered yard gizmos.

Would it kill us to revert back to hand tools? To those delightful little lawn mowers that go clickety-click over emerald lawns? And what if we only allowed small delivery trucks to descend on the Island? I know that would hike the price of Campbell’s Tomato Soup from $1.29 to $19, but it’s worth it, right?

On the bright side, we’re at that threshold of summer, here on Memorial Day weekend, where we’re all in a state of bright breathless hope that THIS season we’ll take time for a daily dip in the ocean, and we’ll smell the roses. On the flowers front, my neighbor Frank Leonardo’s wisteria are starting to form those first exquisite necklaces of lavender petals at the corner of Circuit and Penacook, you know, the ones that thrust their limbs through Frank’s chain-link fence, forming swollen branches as big and knobby as elephants’ knees, wisteria and fence forming a single unbreakable botany experiment that could win blue ribbons in ag fairs all over the country.

I want to truly appreciate Frank’s wisteria blossoms this time around, because their late springtime glory comes and goes so fast, I end up sighing once again, “I barely noticed them this year!” Not forgetting Omar Khayyam’s line, “The flower once blown forever dies.” So this time, walking my Boston terrier, Huxley, past the chain-link wonder, in a blaze of anticipated bliss, I stopped to smell a precious chain of lavender. As I perched my nose on a silken strand, I drew back with a start. It smelled like a dead cigar! Well, not everything beautiful has a corresponding scent. I’ll try again in a week.

And now we come to the part, in our reflections of Memorial Day weekend on Martha’s Vineyard, of contemplating the crowds. Yes, we’re having them. And if you’re anything like me, and a bunch of my spiritually inclined buddies, you’re determined to keep Love-Sweet-Love for all mankind kindling in your heart at the sight of every dear face. Now, of course, some of these glorious beings are going to be staring at their iPhones and staggering into poor little invisible you, but don’t forget they used to bump into you even before there were little screens in their palms. Let us not forget that most of them are smarter than that. And let us make a pact to no longer ask each other about the dumb and dumberer ones: “Are we that dumb on vacation?” (Answer: We’re not, but we can let that go for now.) 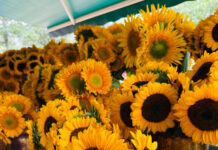 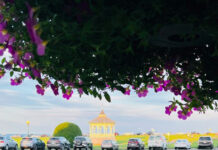