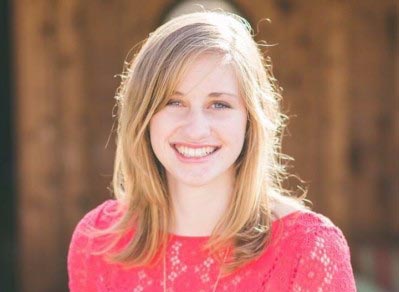 A large brown delivery box arrived at graduating senior Livie Jacobs’ house on a Monday night in early May. Inside were 200 books, each cover printed with a green central image of Martha’s Vineyard against a blue background with large white letters along the bottom spelling out Livie’s first and last name. The title reads, “This We Believe.”

“I couldn’t believe they were at my house,” Ms. Jacobs said. “I never expected it to be a real book.”

For her Martha’s Vineyard Regional High School senior project, Ms. Jacobs was inspired to create something for her community. “This We Believe” is a book about the people that shaped the first 18 years of her life.

Inspired by NPR’s popular book series “This I Believe,” Ms. Jacobs’ book is a compilation of personal essays written by a variety of carefully selected authors, ranging from the 6-year-old girls she babysits to well-known Island teachers.

“Everyone has a story to tell that makes them who they are,” Ms. Jacobs said. “That’s the idea behind the project.”

Ms. Jacobs’ book first took form as a Google spreadsheet, where she began drafting the names of people who have impacted her life in any way. She thought about her peers, the people who intrigue her, the people who are kind to her, or the people that simply look like they have a story to tell. “You know when people just sort of look wise?” she said.

Eventually, she narrowed down the list to 42 names, including friends, family, students, teachers, and mentors. Then it was time to get everyone onboard. She created a flyer outlining the “This I Believe” writing guidelines from NPR’s website, inviting her selected essayists to write freely and openly, to not be daunted by words, and to let their voice carry through.

In order to appeal to fellow seniors already flooded in a vast sea of college essays, Ms. Jacobs knew her project needed something more than just words. “What’s something I can include that will express each essay uniquely?” Ms. Jacobs asked herself. “My mom always says people’s hands age ten years faster than their face. Hands can say so much about a person.” With that in mind, Ms. Jacobs asked her participants to include a photo of their hands in any gesture or alongside any object that reflects the theme of their essay.

Throughout the book, Ms. Jacobs also included excerpts from the novel “The Power of Kindness” by Piero Ferrucci. The quotes reiterate her message to always be kind and to never assume things about people.

After working out the concept of her project, it was time to update that Google spreadsheet to answer the crucial questions: Did the person say yes? When will they have the essay written? Have they submitted a photo? Does the piece have a title? “Coordinating with 40-plus people at once was probably the biggest challenge,” Ms. Jacobs said.

Ms. Jacobs says it was especially funny working with teachers, who always seemed to be the ones pushing their deadlines back. “The roles were definitely reversed. I got to see their side of things,” she said.

But that’s just one of the new perspectives Ms. Jacobs gained. She says this process showed her that even the people she knows best said something she never could have guessed. “Even my own parents,” Ms. Jacobs said. “It’s not like we sit around and talk about what we believe.”

Ms. Jacobs remembers opening up that delivery box, picking up a book, and holding for the first time the fruits of a six-month project she refers to as “the bane of [her] senior year existence.” She gave her essayists a copy first, then the high school library, and before she knew it, her project became the buzz of the hallways.

“Everyone was just curious what everyone else had to say,” Ms. Jacobs said. “It was a huge honor for me to have my senior project so well known.”

Ms. Jacobs also said “This We Believe” tore down some community barriers. The professionally structured student-teacher relationships have softened, and new sides to well-known Island figures have been revealed.

“We can all see each other as a little more connected and a little more human,” Ms. Jacobs said. “And I think that’s a positive thing.”

But maintaining the confidentiality of people’s stories is a priority. In the book’s preface, Ms. Jacobs writes, “My one request is that you refrain from approaching authors about the personal experiences about which they wrote. Instead, seek out the author whose essay touched you … give them a hug or a smile.”

Ms. Jacobs first sold copies of her book at the high school’s annual “Evening of the Arts” on May 25. She sold her book for $10, but something about it didn’t sit right. “I think it’s important to mention that I didn’t write this book,” she said. “I compiled and edited the essays, but these are other people’s stories, and in some ways it felt wrong selling them.”

That’s why Ms. Jacobs plans to sell the copies she has left to “true Islanders.” She wants to make enough money to pay back the high school, which paid for half of the copies.

The ample support she’s received from the community is one of her biggest takeaways. As she heads to Hamilton College in the fall, she looks forward to having a little piece of home to take with her. “I’ll always have this book. I’ll bring it everywhere,” Ms. Jacobs said. “It’s a reminder that I have a lot of people who I love, and a lot of people who love me.”