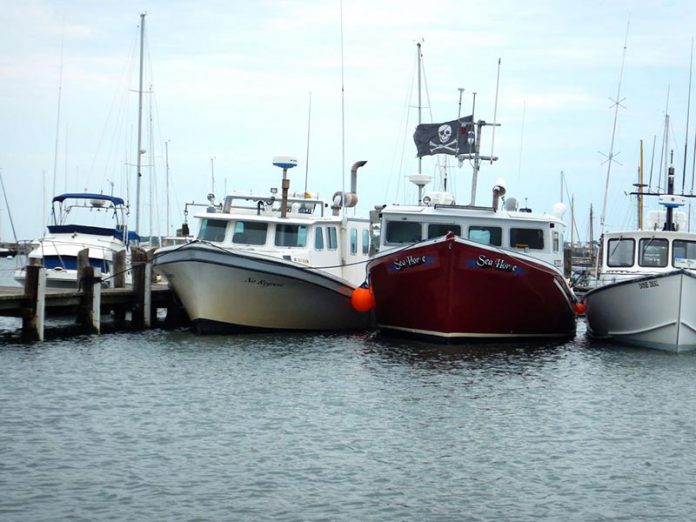 Most days, the waters that surround Martha’s Vineyard are a source of pleasure and sustenance. This week brought measured pain.

One man, Mike Mobilia of Plymouth, an electrician by trade, lost his treasured 42-foot Ocean yacht to a fire, but he walked away with his two children, family members, and friends.

Luke Gurney, a commercial conch fisherman from Oak Bluffs, became tangled in gear and lost his life when he was washed overboard; and his wife and two sons lost him — a heartbreaking story. The constant in these two stories was the community support.

The Coast Guard played a role in both incidents. On Saturday, they stood by, much to Mike’s dismay, as his boat burned. On Monday, they recovered Luke and then told his wife, Robyn, her husband was gone.

I received two emails in connection with both incidents. I asked BMCS Robert Riemer, officer in charge, Station Menemsha, about the Coast Guard’s role. They first came out in a small boat, and then returned with the 47-foot motor lifeboat. Their overriding concern was the safety of the passengers, not the boat. A thoughtful man, Chief Riemer provided me with a sound explanation in an email.

“The 29-foot Response Boat Small does not typically carry a portable pump, so with the 29, they had no firefighting capability. The 29 also has a foam collar that does not withstand high heat very well. In addition, there is limited deck space on the 29. The 47 does have a portable pump in its outfit, and provides both more deck space and a high vantage from which to apply water.

“In most cases our response standard is 30 minutes from the time of notification. We are often much faster than that, and at times it can take longer with the need for additional personnel or equipment.

“When we respond to a fire, our main concerns are taking action in the initial stages of the fire and preventing the spread to other boats. We are not trained to combat fires that are fully involved. We also only carry basic equipment like fire extinguishers. We do have a portable pump for dewatering a vessel that can be rigged for firefighting, but that is kind of an ad hoc capability that takes time to rig. Smoke would qualify as an initial stage; most of our involvement here happened after the initial stages.

“This boat owner did the absolute best he could under the circumstances. He made a good decision to exit the harbor, reducing the risk of spreading the fire. He also made a good choice to evacuate his passengers. In addition, he had good equipment on board and kept a relatively calm approach while methodically trying to find the source of the fire and take action. He also recognized when things were beyond his ability to act and left his vessel.

“All of these things set a good example to other boaters. Stay calm and try to make well-thought-out decisions. Have the right equipment and make sure it works; this includes, but is not limited to, fire extinguishers, life jackets, and a radio. Finally, know your boat, and have a good sense of what you can do and what is beyond your abilities.”

On Wednesday, I received an email from Wes Brighton, an Island commercial fisherman. Wes was moved to comment on the unfortunate death of Luke Gurney. His email follows.

“On any given day in any one of our lives, the unknown inhabits a part of our consciousness but is camouflaged by the sweet mundanities of life and is beautifully hidden by the joy and love given to each of us by our family, our friends, and our passions. We know of it now, though, because we have lost one of our dearest.

“How does one speak of the unspeakable? How does one comprehend the unfairness of the incomprehensible? Neither seems possible without the passage of a moment in time, the measurement of which is infinitesimal with the loss of a leader. Within this moment of time that feels so deeply unjust and beyond the boundaries of reality, I can speak only of the person I knew, deeply respected, and loved, as we all forever will.

“Luke was a master of pursuit, his energy high and constant. His life was brimming with community and friends; his family was his core, his soul, his being. He inspired selflessly and was unassumingly rewarded with a knowing spirit that seemed to come with the quiet satisfaction he enjoyed from the achievements of others. His caring generosity was tireless, and manifested in the role of vanguard as he watched over younger fishermen, his being the first ring of the telephone when a returning vessel was past the time to reach the dock at night.

“In our meetings just after 2 am at the dock, coiling our lines to the roar of the warming diesels echoing off the harbor and bows getting ready to head east, we would talk (far longer than we should have, as our crew knew that we were tacking on precious minutes to a long and arduous trip). Luke’s voice would be loud with excitement, whether the topic was regulations, moon phases and tides, or the update on his latest hockey game, but that voice, filled with joy, would always come back full circle to his two boys who, someday, he thought would join him as mates, captains …

“On the dock today, heads hung low and eyes looking for answers, one of us asked the question, ‘Why do they always take the good fishermen?’

It was quietly answered, ‘My grandfather told me that they have to take the good fishermen ’cause heaven needs angels to watch over all the other ones.’

“Luke was our better angel in life, and is our guardian now, and, though so agonizingly wrenching to our hearts, I humbly and painfully believe that Captain Luke Gurney would want all of us to rise from the sweet mundanities of life and speak with the power of joyful love the name that is so proudly calling from his F/V bow: NO REGRETS.”