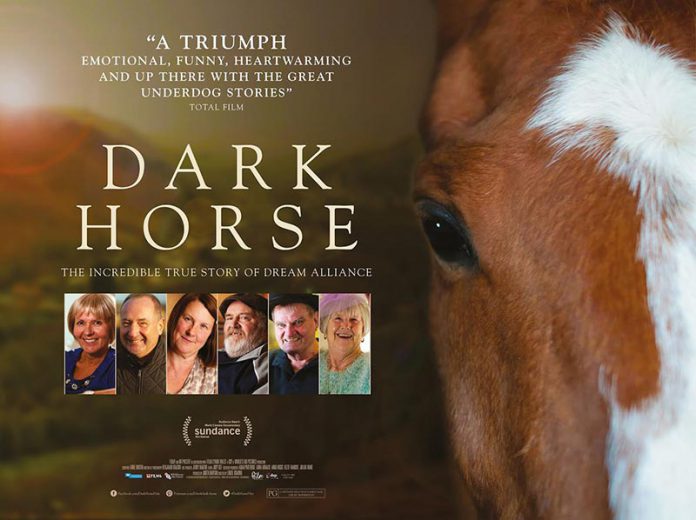 “Dark Horse,” a Welsh wonder of a documentary about an unlikely racehorse and the mining-town community that fosters him, opens this weekend at the Martha’s Vineyard Film Center.

“Dark Horse” starts off in Cefn Fforest, a working-class Welsh mining town on the skids, and develops into an engrossing and suspenseful story of a steeplechase horse who becomes a champion. In this form of cross-country racing, horses must clear hedges and water obstacles as part of the course. The sport originated in Ireland in the 18th century, and acquired its name from the church steeples that served as markers for the course.

The story begins with Janet Vokes (Jan), who works at the Cefn Fforest Pub. She grew up with parents who raised champion budgies and whippets, an experience that led to her dream of breeding a racehorse. Taking on a second job, she launches a plan to overcome the barriers to this expensive, exclusive sport of the landed gentry. First off, Jan solicits her friends and neighbors to chip in £10 a week each to cover the cost of a brood mare and stallion. Twenty-three agree to underwrite the project. They purchase a brood mare that has never won a race for £300, and a stallion for £1,000. The two horses produce a gangly but promising light chestnut foal. Shareholders pick names and select the final one, Dream Alliance, out of a hat. As Jan puts it, with his flashy white socks, Dream Alliance is a working-class horse set to take on the best of the best. “He was like one of the family,” Jan says.

At his first experience run in 2004, Dream Alliance comes in fourth. Steeplechase, with its high rate of injury and death, becomes the race of choice for this up-and-coming prospect. Dream Alliance wins contest after contest, including the 2008 Welsh Grand National against 40-to-1 odds, then becomes a contender for the 2010 Grand National.

Directed by Louise Osmond, “Dark Horse” follows the exciting ups and downs of Dream Alliance’s career. An important part of the film’s pleasure comes in seeing how this down-at-the-heels community unites to support Jan and her racehorse dream. The 23 shareholders, including Jan and her front-toothless husband Brian, stroll into an arena usually reserved for aristocrats proudly flashing their owner badges. But the path to glory is not without its setbacks. The shareholders use their winnings to keep their horse competing. They see him as a horse that has enriched a lot of lives. “Dark Horse” won a well-deserved audience award at this year’s Sundance Festival.

Information on screening times and tickets for this and other current films is available at mvfilmsociety.com, entertainmentcinemas.com/locations/Edgartown, and MV Times event listings.