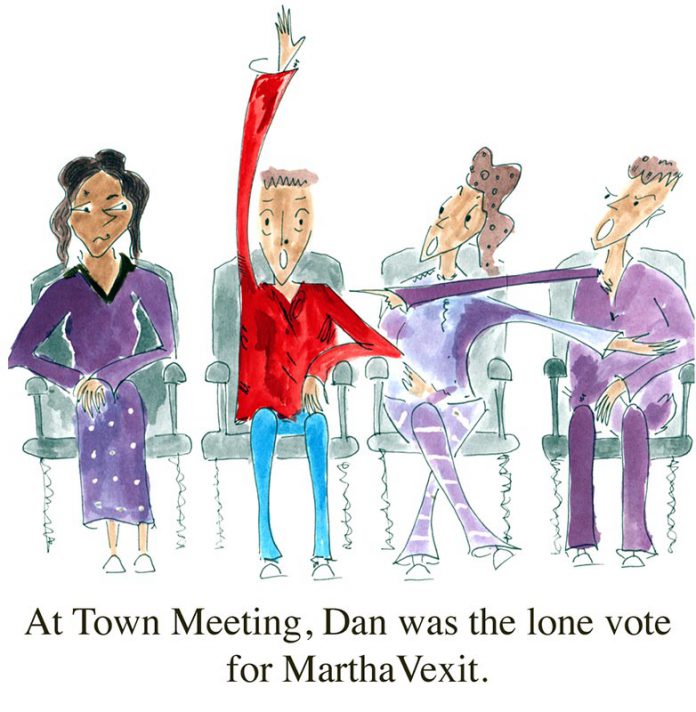 Will you field a question on local politics from an opinionated foreigner? I’m from England, and upset that the U.K. just voted to leave the European Union. A lot of pro-Brexit types are defending that choice as a celebration of democracy, but given how easily misled the masses were (even the pro-Brexit leaders are starting to admit that), I consider the outcome a chilling argument against a one-person-one-vote approach, which increases my appreciation of a system with checks and balances (delegates, etc).

At a cocktail party our hosts took us to the last time we visited the Vineyard, I learned about the practice of “direct democracy” — your annual town meetings — and what I want to know is: In light of what we’ve just seen the one-person-one-vote system can do, shouldn’t Martha’s Vineyard reconsider her quaint approach to governance?

Confidentially yours,
No Brexit

Ordinarily I would never take on a question like this — I write (nominally) about etiquette and ethics, and both should transcend politics. But since otherwise I’m looking at a pile of queries about cocktail parties and tiresome house guests, I will hazard a response.

This isn’t the venue for me to vent my political views (that’s what Facebook is for!), so I’ll refrain. Instead, I’ll just try to reframe the heart of your question in a call-and-response form:

You: The People can be hoodwinked, manipulated, and tricked.

You: If The People are hoodwinked, manipulated and tricked, then they could end up voting for something they wouldn’t actually want to vote for if they understood it more clearly.

You: Therefore, The People need checks and balances to protect them from their own gullibility, etc. And That Includes the town governments of Martha’s Vineyard.

Assuming that’s the conversation so far, I shall now begin my columnar answer:

I am absolutely unqualified to critique any large-scale modern political system (Renaissance Venice is another matter), but having been an active participant in town government, I feel I can respond to you with a resounding No. What allows a one-person-one-vote system to wreak havoc is a lack of accountability. With a few highly anecdotal exceptions over the years (I’m lookin’ at you, Unnamed Up-Island Town), the system of annual town meetings has built-in accountability.

First of all, if you want to vote at the annual town meeting, you have to Show Up. Which generally means you will Hear All About What You’re Voting For. You get Educated, however imperfectly, whether you wish to or not. You can’t change the channel, press mute, or “close tab” when your biases are challenged. Second, your vote is public — it’s a voice vote — and when it’s too close to call as a voice vote, you have to raise your hand. Yes, that’s right, your vote counts because it is literally counted … by people whom you run into at the grocery store, buy your firewood from, and possibly cheated with on that math quiz in third grade. We also have ballot-box voting, of course, so the accountability is not absolute, but it’s harder to just let off steam without realizing what the repercussions will be. (The town of Tisbury had to vote twice on whether to allow beer and wine to be sold — the first time it was a tie, and the second time, the measure passed by two votes. Surely as a citizen from the land that gave us the word “pub,” you can appreciate the impact that had on all of us, even those of us not from Tisbury.)

The next time your hosts take you to a cocktail party, ask around about the Vineyard’s own secessionist tendencies. We have attempted to free ourselves from the ties that bind twice already — in the 17th century and again in the 1970s. In 1977, every town meeting passed a resolution to secede from Massachusetts over the redistricting of state representatives. Turns out that did not actually give us the power to secede, because we aren’t actually a sovereign state, but that’s beside the point. The point is, people actually understood what they were voting for — before they voted. After the resolution passed, there was no mad dashing to encyclopedias to “go ogle”* what “Commonwealth of Massachusetts” meant. I was too young to vote, but those who did actually knew what they were voting for. Because they could only vote if they were attending a town meeting. Which means they were paying attention, even if it took an effort.

I don’t mean to sound smug, or superior. Americans (and, OK, even Vineyarders) are capable of boneheaded impetuousness that has sometimes dismayed the U.K. (like that kerfuffle in the late 1700s — if you don’t know what I’m referring to, read some David McCullough). But since you framed this question specifically in terms of Brexit, I have to say: Just because your fellow voters didn’t educate themselves in time doesn’t mean my fellow voters will do likewise.

Bemused readers ask novelist Nicole Galland for her take on navigating the precarious social landscape that comes with living on the Vineyard. Nicole, who grew up in West Tisbury, is known locally as the co-founder of Shakespeare for the Masses at the Vineyard Playhouse and is the author of “I, Iago.” Her combined knowledge of both this Island and the world’s greatest melodramas compels her to help prevent unnecessary tragedy wherever possible. Trying to untangle a messy Island ethics or etiquette question? Send it to OnIsland@mvtimes.com