Ship’s carpenter and boatbuilder Charles Gifford was born on Penikese Island — then known as Pune Island, and still technically part of Chilmark — where the Gifford family lived and tended sheep. Moving to Holmes Hole after the end of the Civil War, he lived with his wife Betsy in their home on Water Street (the one recently demolished near Five Corners), and ran a boat shop near the marine railway on Beach Road.

In his 1907 memoir “The History of Cedar Neck,” author Charles Hine wrote fondly of his memories of Gifford and his shop:

“The harbor waves rippled on the beach at his door, and always were there boats in the making or repairing. One day there wandered into his shop a couple of young men who found the boatbuilder down on his back doing a bit of caulking. Now Mr. Gifford was possessed of a beard that was of some length, and the strange young visitors immediately became fascinated with the thought that next time he would surely caulk his whiskers into the seam, and soon they were laying bets, and it is said they stayed a goodly part of the day in the firm conviction that it must happen soon, but Mr. Gifford still wears his whiskers, for he had been there many a time before.”

Gifford’s shop eventually became part of what is today the Martha’s Vineyard Shipyard. 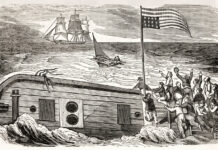