Something about summertime makes food taste so good. It may be the fresh air and sunshine, busy days at work, on the beach or in the garden building up an appetite, or the happy company of family and friends. Many agree that summer’s fare is the best of all, and memories of favorite summer foods stay strong, still tempting though the years.

I remember plump, red tomatoes warm from the field, eaten out of my hand, dripping  juice. And our delicious corn that drew crowds to our Connecticut farm stand. I helped strip just-picked ears, then my grandmother tossed them in boiling water. My two uncles and grandfather would run the steaming golden ears through a stick of butter, melting a deep indentation, and I followed suit, devouring my fill.

My daughter Diana, who grew up in West Tisbury, remembers corn, too, from Donnie Mills at Hillside Farm, soaked in water and tossed on the grill, husks and all. She loved the frequent lobster feasts back when she and her dad, Dan Prowten, went out lobstering every week. And there was her angel food birthday cake, thick fudge frosting dripping down the sides in the August heat, rainbow sprinkles on top, with Breyer’s Neapolitan ice cream.

Recently, I asked some Vineyard friends to share their own savory summer food memories.

The Danish currant pudding, “rødgrød med flød,” has been a family favorite for generations. The recipe was brought to this country by her great-great grandmother, who emigrated from Denmark in the 1880s.

When Rosemary’s grandparents, George and Catherine Mathiesen, moved to the Island in 1969, launching Chicama Vineyards soon afterwards, the pudding recipe came with them. Catherine made the summer delicacy for her six children, including her daughter, Lynn (Rosemary’s mother)

Later, Lynn Hoeft prepared it for her own daughter. Rosemary remembers her mother making the dish when she was little, growing up on the winery property.

“She always had red currants growing in our garden. We’d pick them in mid-to-late July. We’d pick our own raspberries, or pick at Thimble Farm when the Moskows owned it.”

“It was definitely a special thing for my mom and me,” reflected Rosemary. “It always felt like a very Mathiesen family thing — a fun family thing. It’s a nice tradition to have, and a nice connection all the way back.”

“I make it now,” said Rosemary, a farmer at Morning Glory Farm who manages the herb garden. Her husband, Tony, a stonemason and musician, loves it, she said.

So far their son, Billy, 2,  has not tried it. Last year life was too busy for making pudding, as the family was moving into their newly built West Tisbury home.

“We’re definitely going to make it this year,” Rosemary promised. “It seems like we have a good crop of currants.”

The family will pick currants from bushes she and Tony planted in their backyard orchard, bushes that Lynn dug from their Chicama Vineyards garden, brought with her and planted in Vermont, where they thrived for eight years. Lynn has returned to the Island, and lives beside Rosemary, Tony, and Billy in an adjoining apartment. The currant bushes have come home too, and it’s nearly time to make the pudding.

In a saucepan, cook the currants with 2 cups raspberries and 2 cups water for about 10 minutes.

Put through a sieve or food mill. Combine berry puree with ¾  cup sugar, ½ cup quick cooking tapioca and a pinch of salt.

Cool. Drizzle heavy cream on top of each serving, repeat as necessary.

David Amaral grew up in Oak Bluffs in a family whose dinner table always featured food that came from fishing, hunting, or harvesting in the big backyard garden.

Although as a very little boy David loved lobster, when he was around 10 his preference shifted to blue shell crab. Those tasty crabs became his summertime favorite and they still are.

David’s dad was the late Nelson Amaral, longtime Oak Bluffs fire chief and well-liked and respected community member. He was an accomplished fisherman and hunter, and David learned those Island skills on family expeditions to the woods and water.

They fished throughout the year and shellfished too. Everything they could hunt appeared on the table, including deer, rabbit, woodcock, duck, and pheasant.

David recalled going crabbing as a boy, heading out with his father, his loyal golden retriever Rusty, and usually friends or relatives.

“My father always drew a group of people. It was more than just us,” he said. “In those days we could go right to Cow Bay or Farm Pond and get what we wanted any day. Now we have to take a boat and really search around.”

“The minute you got them home and cooked, you were just going to spend the next three or four hours eating them,” David laughed.

Asked about any serving tips, David said it was simple: “drawn butter.” Crabs are the main feature and no side dishes are needed.

“It was ‘this is the job we have to do, eat these crabs.’ And that’s what we did. I was a determined little cuss. I wanted to eat them until I couldn’t eat any more.”

David said he still loves the crabs, but they are becoming harder to find. There are good seasons and bad seasons, and some spots are better than others. David and a handful of friends often trade tips on where to catch them.

Not quite every meal was homegrown back in the day, David admits. He had another special summertime favorite: “All of us Islanders would wait all year for Giordano’s pizza. There were no pizza parlors on the Island then. We had pizza for ten weeks and that was it.”

Now David says he buys more groceries than he grows or harvests in the wild. But still many a dinner includes a fish he just caught and the vegetables still come from his garden out back.

Chris Murphy and the beach cake

Chris Murphy of Chilmark breathes the name reverently. Of all the meals and snacks and treats the family ate at summer picnics, it is beach cake that is truly memorable.

It was sweet and sticky, and as mysterious as it was delicious. No one except his mother Polly Murphy herself was sure what was in it.

“It was a banana bread and vanilla cake mixed with chocolate frosting,” said Chris of the rectangular, single-layer confection. “It was as simple and easy as could be, with some bananas tossed in to give it zip.”

Polly packed the freshly baked cake in a basket with other picnic food. Then with a car full of children and beach gear, the Murphys would head to Quansoo or Lobsterville.

The picnic routine was the same each time, Chris recalled. “Our first job was to walk up and down to find enough wood to make a fire.”

Along with Chris and his siblings, Laura, Kitty, and David, the outings usually included a gaggle of cousins and friends.

Some beach outings were early, Polly and the youngsters joining other mothers and children. On evening picnics, Chris’s father Stan would come along. “He didn’t want to stop painting until it was late in the day.”

Always a dedicated artist, Stan took other jobs to support his family. He worked at Hancock Lumber, located on the site of the recently demolished building on the Boch property. Shellfishing was more to his liking, since he could schedule it around painting.

On the beach, the children played and swam, the adults relaxed and cooked. Supper was often “an inexpensive cut of steak with a slice of onion,” Chris said.

“Then they’d pull out The Beach Cake.” Chris remembers the sight of it, the enchanting, unidentifiable combination of flavors. “After you’d been on the beach for a few hours of sun and water, it was a pretty magical thing.”

He and his siblings and wife Barbara have tried to replicate the well-loved dessert ever since. But nobody has a recipe. Although they mix together likely ingredients, it just is never the same.

“It needed to go to the beach and get sandy in order to taste right,” he chuckled.

Maybe there is a secret ingredient they will discover, a precise formula. More likely what the beach cake needed was Polly’s magic baking touch, the leisurely picnics and family all gathered around on the beach as the sun went down.

The Tankard family started arriving on the Island in 1961, when matriarch Audria moved here from Newark with four school-aged children. Later the older siblings came along. Eventually seven of the ten Tankard siblings and their mother settled here, the family becoming a spirited, positive presence and contributing to many areas of the Island community.

Anyone who got to picnic or dine with the Tankards was lucky. According to Carol Tankard Giosmas of Oak Bluffs, her late mother was a wonderful cook. The siblings alsohave that innate food preparation gift.

“None of us Tankards use a ‘recipe’ per se, we kind of eyeball things.”

A favorite summer meal was fried scup, dating back to 1959, the first summer they visited, renting a house near the Ocean View, packing in kids and relatives.

Most dinners were fish they caught off the Oak Bluffs SSA dock. Once they moved here, fishing for meals was a regular practice and the foundation for Sunday beach picnics.

“Mom loved to fish. A couple of us would go fishing and catch a bunch of scup.”

They cleaned the fish at the pier and brought them home ready to cook.

“Mom would fry them up with a little cornmeal, cook her famous fried chicken recipe. She made incredible potato salad. If she had time, she’d make cornbread to go with it.”

“Sunday was a day of rest to my mother, and bringing the family together by going to the beach with good food filling the cooler.”

“Most Islanders don’t eat scup because of the bones, but that’s what makes it taste so good,” Carol said.

That fish was a family favorite, but the fried chicken was famous Island-wide. For twelve years several Tankard women prepared it for the Tisbury Street Fair, selling out fast.

These days, although brother George passed away in 2004 and their mother in 2006, those siblings who remain on the Island and their extended families gather for picnics each summer.

“My sister Shirley Robinson still fries a mean piece of chicken at 80, and Sissy (Audria) and I love to go out in my little aluminum boat and catch scup for us all,” said Carol.

Everyone cooks a favorite dish and they head to the beach to relax, reminisce, enjoy each other’s company and that unmistakable Tankard cooking.

*“It’s a must to use Hellman’s mayo, only the best will do!” Carol declared.

Butterfly the fish, season, cover with yellow cornmeal. Lemon pepper and onion powder are important seasonings. Make sure the oil is good and hot. Cook until golden brown on both sides. 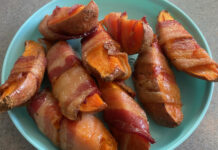