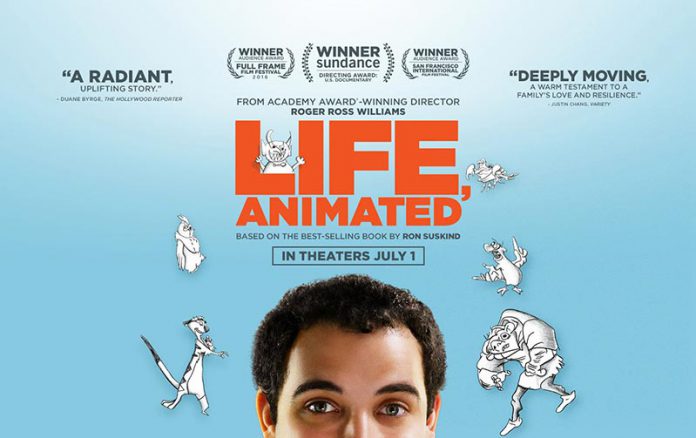 The remarkable documentary “Life, Animated” comes to the M.V. Film Center this weekend and the M.V. Film Festival next Monday. It is a deeply insightful look at autism, a developmental disorder that has increased tenfold in the last 40 years.

“Life, Animated” is the story of Owen Suskind, who started out as a normal, healthy toddler until, as his father, journalist Ron Suskind says, “he disappeared.” Owen’s speech deteriorated into gibberish or silence, he lost motor skills, and social interaction became almost impossible. But this tragic tale doesn’t end there. We see the grown-up Owen, who at 23 years old is a highly functioning, capable young man moving toward independence. This miraculous transformation came about through Owen’s obsession with Disney animated films.

One of the characteristics of autism and autism spectrum disorder is an inability to filter the welter of sounds and information in the world. The resulting overstimulation led Owen to watch “The Little Mermaid,” “Peter Pan,” “Aladdin,” and other Disney films over and over again. Their simplified characters and action gave this child a safe way to structure his surroundings. After spending his early years as virtually nonverbal and unable to relate to his parents, Owen made a stunning transformation. He began repeating lines from the cartoons. “We were set on a rescue mission,” says his father. “We began to talk with him in Disney language.”

As the film develops, Owen starts a Disney club for other developmentally disabled young adults, acquires a girlfriend, and graduates from a special needs high school. He gives a talk in Paris about the value of Disney cartoons, gets a job at a movie theater, and moves into his own apartment in an assisted living facility. He takes his collection of Disney films with him, and they help him cope with bullying, failure, disappointment, and sadness.

Lest viewers think autism is a relatively limited disability, they should know that two million individuals in the U.S. suffer from it, and the numbers are growing. Autism appears more often in boys than girls. Despite the deficits associated with it, many have high-level visual skills, music, art, and math talents.

“Life, Animated” premieres at the M.V. Film Center on Thursday, August 18, and also plays there Friday, August 19, and Saturday, August 20. Director Williams will take part in a post-screening discussion, and on Friday and Saturday Owen’s father Ron and brother Walter will join Williams.

The M.V. Film Festival will screen the film outdoors at the Beach Plum Inn on Monday, August 22, with the Island Autism Group as a co-presenter. A fundraiser, the film will be preceded by a wine and cheese reception, and Williams and Ron Suskind will attend.