It began with a nosebleed.

It was late last March and Teresa Yuan of Edgartown was starting to think about getting out and doing some early spring planting. Ms. Yuan runs Yuan Gardens and has about a dozen clients, many of whom have been with her for years.

But the bleeding wouldn’t stop.

Ms. Yuan, who lives alone, became concerned and went to the emergency room at the Martha’s Vineyard Hospital. From there she called her daughter, Emma Lovewell, who lives in Manhattan, and told her her that the ER doctors thought it might be connected to some kind of allergy — Ms. Yuan had a history of allergies. The doctors packed her nose with cotton and she went home.

The next day Ms. Lovewell received a call from a family friend who said that her mother was not doing well and asked if could she please come home.

Ms. Lovewell and her boyfriend Dave got in their car the following day and drove to the Island. When they arrived, things had taken a turn for the worse. Her mother was back in the ER — bleeding — and in a lot of pain.

They all remained in the ER for about four hours and then went home.

Over the next few days, they met with Ms. Yuan’s allergist and reviewed the CAT scan and the MRI. The allergist thought the problem was either polyps or a tumor — he wasn’t sure which — so he scheduled a visit with another specialist off-Island — in two weeks.

It was at this point that Ms. Lovewell took on a new role — patient advocate.

“I’ve always believed you should listen to your doctor,” Ms. Lovewell said, “but this was crazy, there had to be another option.”

The next day she Googled “nose specialists” and found Massachusetts Eye and Ear Infirmary in Boston. She contacted them and scheduled an appointment in two days.

“We had the best experience,” Ms. Lovewell said. “We got a really great doctor, they examined Mom, and said it definitely looked like a tumor and they scheduled surgery in 10 days.”

At the time, Ms. Lovewell had been working in New York for five years as a fitness instructor at a popular fitness studio, SoulCycle, and she did fitness modeling for the prestigious modeling agency Wilhelmina. She had found a calling and was building a career. But for months she had been leading up to 14 spinning classes six days a week and it was beginning to take its toll; she and her boyfriend had been thinking of taking a break and driving across country. But now Ms. Lovewell’s mom was her highest priority; she and her boyfriend both quit their jobs and moved up to Vineyard.

On May 3, surgeons removed 95 percent of the tumor from Ms. Yuan’s nose.

The other five percent was attached to the bone, so they didn’t want to remove it until they knew for sure if it was cancerous. Unfortunately, the biopsy came back positive. Another surgery was scheduled to take out the remaining five percent of the tumor, including the bone between her sinus and brain — in other words, brain surgery.

“The day we found out about the cancer was May 9,” said Ms. Lovewell. “I remember it because it was also my father’s birthday. My brother Alan had come out from California to help and we were all going to get together and have dinner.” Ms. Yuan and her former husband Mark Lovewell have been divorced for many years.

“People say that cancer is awful, but beautiful things can come out of it,” said Ms. Lovewell, clearly trying to hold back her tears. “When my dad came over he and my mom hugged for about three minutes … I haven’t seen that for about 15 years. That was a beautiful moment.”

The second surgery was scheduled for two weeks, and since her brother was there to hold down the fort, Ms. Lovewell and her boyfriend decided to take a couple weeks off to recharge their batteries and drive across the country.

Back on the Vineyard, Alan Lovewell dug right in, literally, helping to get his mom’s gardens in shape for the spring. Ms. Yuan was about to turn 65 and her gardening business accounted for nearly all her income. And for the most part, she did all the work herself. As the co-founder and manager of Local Catch Monterey Bay in California (a community-supported fishery group), Mr. Lovewell was putting in some long days tending to both his and his mother’s business. Just to complicate things, he was getting married in California in early September and there were endless wedding details to oversee as well.

Ms. Lovewell returned home on Memorial Day, the day before her mom’s surgery. The operation was a success and the remaining five percent of the tumor was removed. But now Ms. Yuan had six weeks of radiation to look forward to. And in addition to worrying about her health, she was concerned about keeping her business running.

“Mom was going to be up in Boston during the week for her treatments and I thought, she’s in good hands up there, and as much as I’d like to be up there with her, that’s not the best use of my time,” said Ms. Lovewell. “So I said, don’t worry Mom, I’ll stay here this summer and take care of your business — it was a huge relief.”

Every summer for last few years Emma had been coming back and helping with the gardens, so she knew a lot of the clients. But in order to run the business by herself, she faced a huge learning curve. In June, her mom gave her a crash course in gardening. They’d visit garden stores and her mom would quiz her on the names of the flowers.

“She’s smart,” said Ms. Yuan, “but she didn’t have a lot of experience. But she’s learning so well, she loves flowers, and she’s artistic, so she has a great sense of color. She’s so proud that her flower boxes turned out so beautiful.”

Alan returned for a week in July and somehow the brother and sister team have managed to keep Yuan Gardens flourishing throughout the summer — a feat that was not lost on Ms. Yuan.

“I’m really, really touched by how great my gardens came out,” said Ms. Yuan. “Having my kids come out the way they did … not many kids can do that, it’s unbelievable … just when I needed them the most.”

It’s been a lot of hard work for Ms. Lovewell, but there have been benefits as well: she’s reconnected with old friends, and has been able to experience first-hand the wonderful support network that exists here on the Island.

“Everyone on-Island is so encouraging,” Ms. Lovewell said. “I went to a walk for cancer at the high school. I took a lap with all the survivors — wow — it was very emotional.”

Ms. Yuan is finishing up her radiation treatments this week and is excited to be coming home, and looking forward to to going out to her son’s wedding in September.

But mostly, she’s grateful and proud to have children who pitched in and helped her when she needed it the most — one of those beautiful things that come out of having cancer. 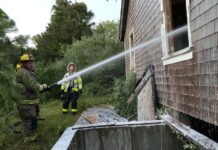 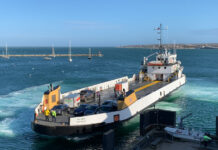