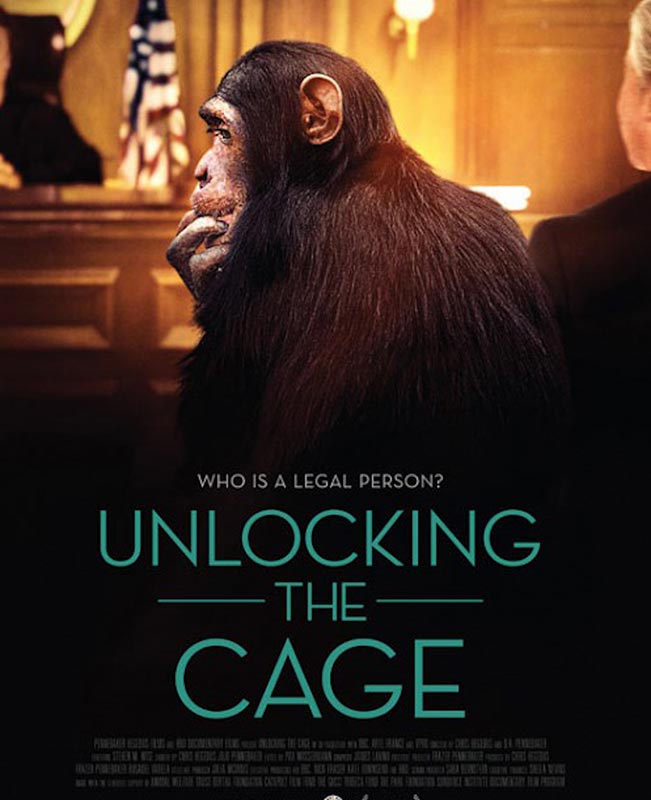 Should animals like great apes, elephants, and cetacea, including dolphins and whales, gain legal personhood? “Unlocking the Cage,” which plays Wednesday, August 24, at the Chilmark Community Center as part of the M.V. Film Festival, asks this question. Prominent filmmakers Chris Hegedus and D.A. Pennebaker will lead the post-screening discussion. Such personhood status for some mammals could become the next frontier in social action movements.

The HBO documentary “Unlocking the Cage” follows the campaign by animal rights lawyer Steven Wise and his Nonhuman Rights Project to bring about the same legal rights that both humans and corporations enjoy. “It’s a civil liberties case,” Wise argues. “It’s terra nova.” He formulates his legal argument on Common Law’s writ of habeas corpus, originally designed to free slaves from their legal status as “things” and from detention. In addition, he cites scientific experts who observe that the animals he is seeking rights for feel pain, understand their surroundings, communicate in sign language, and possess what he calls “a theory of mind.”

The film’s visits to rural zoos, seedy amusement parks, and even Stony Brook University illustrate the often dreadful, perhaps abusive, conditions captive animals such as chimps live in. “Captivity is killing these chimps,” Mr. Wise says. Some are driven mad by caging or engage in self mutilation. One such animal, Tatu, was raised like a human child and communicates with humans through sign language.

The boundaries of what constitutes personhood are complex and controversial. In some parts of the world, rivers and holy books have personhood status. “So my dog can sue to get on my couch,” Stephen Colbert quipped on his TV show. “If he wants to have rights as a person, he should form his own corporation.”

Most of “Unlocking the Cage” follows Mr. Wise’s efforts to sue in court for animals’ personhood rights. Appealing to the New York State Supreme Court, Mr. Wise says he’s not looking for these animals, which some scientific experts group taxonomically with humans, to be considered human. He also argues that animal welfare, for which protective laws already exist, are not adequate or relevant. The state appeals court decision stated that great apes, elephants, and cetaceans do not have legal rights because they don’t bear legal responsibility for their actions or possess the ability to enter into contracts. As the legal case moves through the courts, it has acquired considerable media coverage. The New York Times Magazine published a cover story by Charles Siebert, who appears in the film. Mr. Wise cites a poll that concludes an increasing percentage of people think animals should have rights. “This is the end of the beginning,” he says, quoting Winston Churchill.