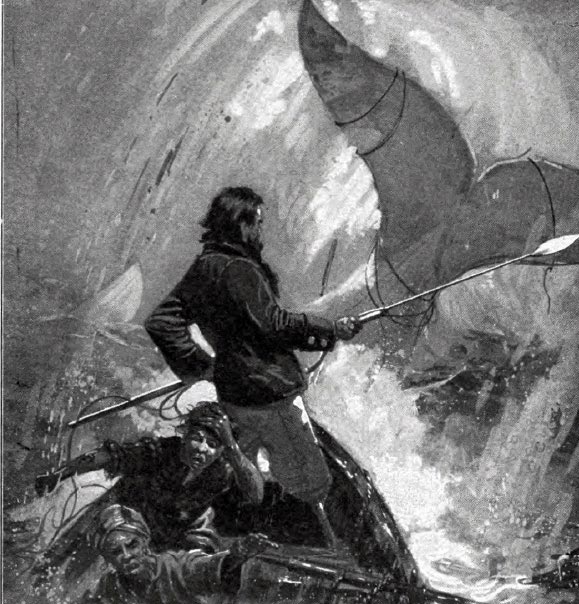 Last fall, I read “The Brothers Karamazov” for the literature class that Phil Weinstein offers to Islanders each autumn. Despite a clever plot, the only character I cared about, the elder Zosima, died halfway through and was remembered chiefly for his stinky corpse. I finished it as a matter of principle and loyalty to Mr. Weinstein, whose expertise and passion draw me back year after year, though I’m always torn between a haunting obligation to master the classics and the risk of doubling down on something that didn’t work the first time I tried it — and expecting a different result. So good for me, I guess, forcing my way through Dostoevsky’s 700-page classic, though I didn’t feel so good coming away from his lectures having grasped only a smattering of what he said.

This fall, starting on Sept. 7, Mr. Weinstein will take up “Moby Dick” by Herman Melville, and “Absalom, Absalom!” by William Faulkner. Early last December, I decided to take another look at “Moby Dick” — yup, another classic — so I’d have a better idea whether to sign up for the course, or not.

I first read “Moby Dick” in my teens, at one of the prestigious New England prep schools I sampled. I bit down hard on the first three words, “Call me Ishmael,” and the first few chapters about the lure of going to sea — you can just about taste New Bedford and Nantucket. Deep in the Litchfield Hills of northwest Connecticut, a landscape I never fully grasped, I was reading about a harpooner from Gay Head! But soon enough I found myself beating against a headwind of what struck me then as overwrought descriptions and endless, pointless philosophizing, even as I struggled with the pedagogic rigidity of the school. My mind wandered, my grades plummeted, and I flunked out.

When I gave “Moby Dick” another stab some 40 years later, I lost interest after the first few chapters. I was working as a proofreader — reading all day — and I usually chose light, escapist books for pleasure. And now, with another 15 years in my wake, I was going to try it again?

I could have test-driven it at the local library, with its sunny reading area and ample parking, but I learned early on to prefer bookstores, where I loved handling fresh new volumes. I never felt comfortable in libraries, where I felt intimidated by all the knowledge around me, and self-conscious because I didn’t know my way around. At a Barnes and Noble in New Haven, I hefted five editions of “Moby Dick” before settling on a Harper Perennial Classic.

A few days later, before it became another piece in the Jenga tower of books that I buy but don’t read, I gave it a look. Roped in right away, I was made fast to both the seagoing and literary vessels, the Pequod and “Moby Dick,” though I was on my toes, ready for the inevitable, imminent comeuppance. But I made it to page 25, 35, and then — what the hell? — 50. Nearly as interested in my continuing interest as in the story itself, I kept at it, and soon enough I was swept up in that wonderful sense of companionship that books can impart. Eager to stretch it out, to savor it, I took it slow. I’d fallen in love. I may never know why, and I don’t know if I care, but I’d arrived at some magical confluence of patience and curiosity with Moby Dick.

It doesn’t hurt that I love boats, of course, and that I find almost anything to do with the sea compelling. Most of the chapters are very short, just three or four pages, and many of them can stand on their own, which lightens the load that 600 pages can imply. Previously numbing expositions of whaling minutiae now interested me, particularly since they are frequently interspersed with sublime writing, even with its sometimes confusing 19th century punctuation and syntax.

When I was about two-thirds of the way through the masterpiece, as the Pequod approached the Sunda Strait between Sumatra and Java, I heard something on the radio about the annual Moby Dick Marathon at the New Bedford Whaling Museum, which was coming up soon. Intrigued now by what I’d previously dismissed as slightly kooky, I decided to check it out.

Now in its 20th year, the marathon has become a four-day event, but at its heart is the nonstop relay reading of Moby Dick, which takes scores of readers about 25 hours to complete. The first reader was Nathaniel Philbrick, whose “In the Heart of the Sea: The Tragedy of the Whaleship Essex” won the 2000 National Book Award and was recently released as a feature film. Lucky him, although he’d certainly earned the honor of uttering those first four syllables — an opening as unmistakable as the first four notes of Beethoven’s Fifth Symphony.

Philbrick has read the book more than 10 times. “It’s written with such force and complexity and beautiful language,” he told the Boston Globe before the marathon. “It’s become like my personal bible.” I’m a tough sell when it comes to bibles, but I get the reference, if only because most of the chapters can be read as lessons.

Listening to Melville’s words for an hour or so that afternoon, I found myself as interested in the participants as in keeping up with the story. The volunteer readers ranged from pretty good to so-so. There were as many as 100 fans in the audience, many of them following along in their own volumes. Others came and went, apparently content just to be there. I wondered, who are these people? Come to find out, there’s even a Melville Society, which publishes a journal, “Leviathan,” three times each year and meets twice annually “for fellowship and discourse.” I thought about joining.

No single book has gripped me like this since “All the King’s Men” some 40 years ago. Pulled inexorably along by Melville now as I was then by Robert Penn Warren, I was delighted to go along for the read. Having stubbed up against Cervantes, Dumas, and Dostoevsky in the past year or so, it was a thrill to come upon a classic that clicks for the current me, no longer young, certainly, if not yet exactly old, and looking for company — and comfort — on the next leg of life. Next stop … Shakespeare? Maybe I’m not uneducable after all.

Whatever happened to Danielle Clermont?

One more plea for symmetrical road