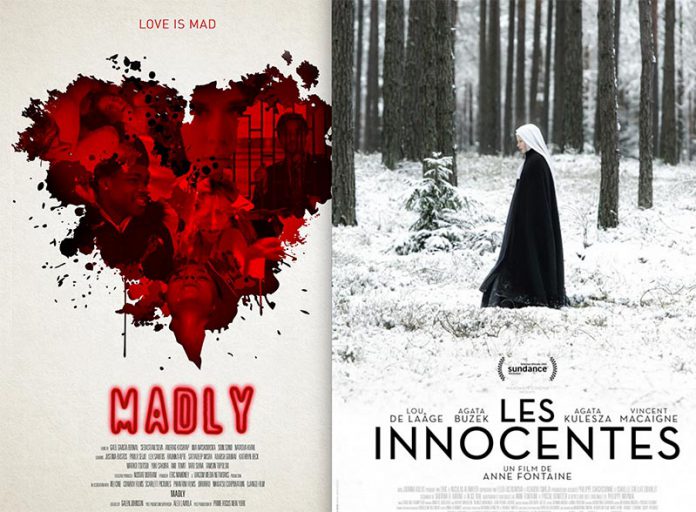 In “Madly,” six directors from around the world offer 15-minute shorts to create an anthology. These are no conventional explorations of love. Indian director Anurag Kashap starts the sequence with “Clean Shaven.” Radhika Apte, who plays Archana, won a Tribeca Film Festival Jury Award for her portrayal of an Indian housewife. Sex with her husband Sudhir takes place with both fully dressed. Archana learns about more passionate sex from her teenage neighbor and virgin male friend Allwyn, who is far more knowledgeable. Thanks to his Internet-acquired lore, she shaves her privates, but her husband is horrified. So it goes in a sophisticated, intriguing story.

In Australian Mia Wasikowska’s impressionistic “Afterbirth,” a dreamy young woman has a baby. She is clueless about how to be a mother, watches the way other mothers care for their infants, and haltingly tries out her new role. “Dance Dance Dance,” by Chilean director Sebastián Silva, follows the travails of teenage Rio in the Bronx. After he kisses and is rejected by his friend Diami, he confesses to his family that he’s gay, and his father ousts him. A poignant and interesting journey follows.

English singer/songwriter Natasha Khan directs “I Do,” about an soon-to-be-married bride. Just before her wedding, Nora wanders outdoors in a mild fit of ambivalence. There she runs across a male acquaintance being savagely beaten. She carries him off for help, her traditional white wedding dress spotted with blood. It is a curious story with an unexpected ending.

Finally, Gael García Bernal, the Mexican actor, director, and producer, has made “The Love of My Life,” set in Buenos Aires. It depicts the deteriorating marriage between a young woman and her older husband. Flashbacks to her pregnancy and subsequent motherhood enrich a story that is an incisive illustration of what can go wrong in a marriage. Each of these six stories has a distinctive feel, and gives insight to different cultural attitudes toward love in its many forms.

“The Innocents,” from Luxembourg-born director Ann Fontaine, is a remarkable, deeply moving French film. Set in Poland, it recounts the story of nuns in a Benedictine convent in 1945. The film is based on the experiences of an actual Red Cross doctor. In the chaotic postwar months after Russian troops forced out the Germans, Russia was in the process of setting up a Communist government. Russian soldiers rampaged through the occupied country, raping Polish women with impunity wherever they went. That included the convent where the film is set, where they impregnate seven of the nuns.

Fearing that the new Communist regime could shut down the convent if the pregnancies are discovered, the iron-fisted Reverend Mother (Agata Kusza) insists that they be kept secret. Then one of the nuns in labor struggles to deliver her baby. Sister Maria (Agata Buzek) sneaks away to get help from Mathilde Beaulieu (Lou de Laage), a doctor at a French Red Cross clinic. Mathilde performs a cesarean section to prevent the breech baby and the mother from dying.

This event sets up Mathilde’s relationship with the convent, and she provides medical care to the other pregnant nuns, using a ruse to prevent more invading Russian soldiers from assaulting the nuns. “The Innocents” explores profound insights on many levels. There is examination of the conflict between Communist atheism and Roman Catholicism. Each of the nuns has a different reaction to the horror they’ve experienced, and crises of shame and faith wrack the nuns’ belief systems. The stark black-and-white cinematography takes visual advantage of the nun’s striking habits, and the director uses the uniformity of the these garments to focus on their individuality in close-ups of their faces. The same is true for Mathilde, who has Communist leanings. Occasionally formulaic plot points do not prevent “The Innocents” from finding its place in the pantheon of the world’s best films.