Roberta Kirn was walking along a dirt path through a Haitian village when she heard some faint humming in the distance. She noticed two girls up ahead carrying water from a nearby well and started humming along with them. The voices grew louder and fuller until they blended together into one seamless exchange of sound.

“It’s different from just meeting somebody,” said Ms. Kirn, founder of the Song Exchange Project. “Singing is a sharing of cultures and energies. It’s a different way of connecting.”

The Song Exchange Project began as a distant dream for the longtime music teacher and educator. It included four key components: singing, traveling, teaching, and collecting.

“It seemed pretty much impossible,” Ms. Kirn said. “I didn’t realize until after the fact that I was actually doing it.”

The project first brought Ms. Kirn to Kenya in February 2014, where she worked with girls in the secondary school Daraja Academy. Since then, she’s gone back to Kenya twice, followed by a trip to Haiti and a recent stopover in South Africa. She picks countries where she knows people; that way she’s easily connected to the community upon arrival. Ms. Kirn spends up to a month in each location, and generally works in schools and in churches.

“It’s not just me arriving somewhere to teach,” Ms. Kirn said. “It’s them teaching me too. It’s truly an exchange.”

Ms. Kirn teaches songs from all over the world, but has a particular interest in music with a connection to the African American tradition. She’ll use songs that incorporate repetition, movement, and rounds so people can focus more on the sounds and harmonies and less on the words. Songs are exchanged in the oral tradition, meaning they’re passed down verbally as opposed to written down. Ms. Kirn keeps a notebook of reminders that help her reproduce what she’s learned from community to community. Much of her current inspiration comes from teacher Ysaye Barnwell, the director of Sweet Honey in the Rock, an all-women African American a capella group.

On Wednesday, Oct. 5, at the Chilmark library, Ms. Kirn will share the songs, stories, photos, and videos from her months on the road with the Vineyard community. This is part of her effort to bring the power of song to a culture that may need it the most.

“In other cultures, people sing. It’s just something they’re comfortable with,” Ms. Kirn said. “In our culture, not so much. We don’t just spontaneously sing, but it’s true that we could all benefit by doing so.”

According to Ms. Kirn, science supports that. Singing together relaxes us by releasing endorphins, reducing stress hormones, and regulating heart rate.

“There’s a great sense of connection we get, especially given the fact that we’re all in our own worlds with our devices,” Ms. Kirn said. “It’s a wonderful thing to be able to very quickly connect with others through song.”

Ms. Kirn’s next big dream is to bring these concepts to businesses and corporate retreats.

“At conferences, when people are sitting for long periods of time, I’d love to get people up and singing. It refreshes us, it changes the energy, and that’s the next frontier for the Song Exchange Project,” she said. “Instead of climbing a rock wall or whitewater rafting, people could be singing.”

“The concept is, Everyone can sing. And I want to make it so that even the people who don’t are encouraged to,” she said.

Her future endeavors remain relatively local for the time being, but she’s hoping to make it to Zambia or Brazil for a short winter trip.

“You see it in other cultures,” Ms. Kirn said. “They don’t have very much, but they have this incredible ability to connect through song.” 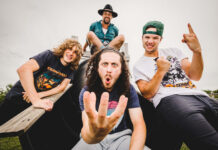 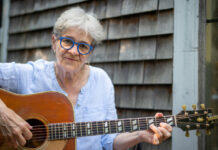 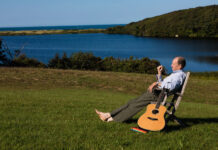 Going to the Beach