They’re off! Artists Walker Roman and Danielle Mulcahy of Barnyard Saints Art are taking their 26-foot-long candy-apple red fifth-wheel trailer on the 2:30 pm ferry this Wednesday to begin the journey of a lifetime. After setting up and selling five days a week at the Artisans, Featherstone, and Chilmark flea markets all summer, Ms. Mulcahy and Mr. Roman have spent the fall renovating and upgrading their ecofriendly trailer with some help from friends and family. They plan to take it on the road as a home and a traveling studio for the next two years.

At a sendoff party on Sunday, guests were treated to tours of the trailer, as well as a screening of the first webisode about their trip. The gathering, hosted by the artists in collaboration with Pathways ARTS, also included a potluck and music by Neil Howl.

Ms. Mulcahy and Mr. Roman, partners in life and art, met at Massachusetts College of Art in Boston. After graduating in 2013, they moved to the Island to live and work at Mr. Roman’s parent’s home in West Tisbury. Mr. Roman’s paintings took a turn from abstract to more landscape once he settled back on the Vineyard. Ms. Mulcahy, originally from Holden, a small town outside Worcester, found a home for her passions in our diverse community, from farming to fiber arts, artist flea markets, dance, theater, alternative film, and more.

Sharing studio space was a challenge. Mr. Roman worked on his paintings during the day while Ms. Mulcahy did freelance work. Her first job was working for photographer Randi Baird, but she soon learned that too much time on the computer was creating imbalance between her drawings and paintings and digital work in photography and film. Ms. Mulcahy has since gone on to produce music videos for musicians like Neil Howl (she also performs background vocals in his group). Howl’s most recent music video was shot by Ms. Mulcahy inside the old Marine Hospital in Vineyard Haven. Last spring, Ms. Mulcahy went on tour with musicians Freddie & Francine, creating music videos which can all be seen on YouTube. The most recent video includes some familiar Vineyard faces.

One of Ms. Mulcahy’s other loves, fiber arts, stems from her step-grandmother, who was a Nordic weaver and spinner. Ms. Mulcahy spins her own yarn and makes scarves. Since moving to the Island, she has learned about plants, dyeing, and animals from Rebecca Gilbert of Native Earth Teaching Farm. She’s also learned to play violin from Cesar Atzic Marquez-Abadiano. Her illustrations have regularly appeared in “Edible Vineyard,” children’s books, and other commissions.

Walker Roman, according to Ms. Mulcahy, is a nerd, a super-smart one, and also the cook in the family. She is “the people person,” according to Mr. Roman, but don’t be fooled. Mr. Roman’s people skills and art chops landed him his first participation in a NYC art show at the Launch F18 Gallery in 2013. He enjoyed working as an artist in residence and designing the set for a show at the Martha’s Vineyard Public Charter School in 2015. His accolades include a Pathways Projects Institute honorarium in 2015, and other awards received while a student. He also worked as a gallery associate at Martha’s Vineyard Glassworks in West Tisbury for several years. There he learned to use bags of cedar chips in cabinets as a mice deterrent — something he has already employed in their new home trailer.

One of the things Mr. Roman is looking forward to on the road is time to play guitar. He even built his own electric guitar while a student at MVRHS. He also hopes to offer workshops from the trailer when they’re “in the middle of nowhere.”

The itinerary begins in Jefferson, Mass., then on to New Hampshire to stay with Mulcahy’s family, then with RV enthusiasts who’ll let them stay a few days in their side yard. Some folks they met this summer are hosting them, and one of the shows they’ll do in New Hampshire provides overnight parking space. If you have friends in New Hampshire or will be there yourself, be sure to check their website to see where they are.

Ms. Mulcahy will continue to document their trip throughout the country, and will share

episodes at barnyardsaintsart.com, as well as exclusive updates on mvtimes.com. 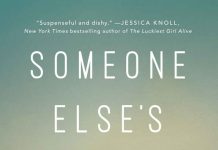 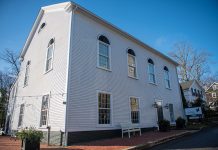 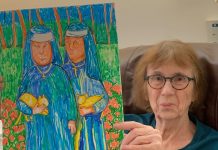