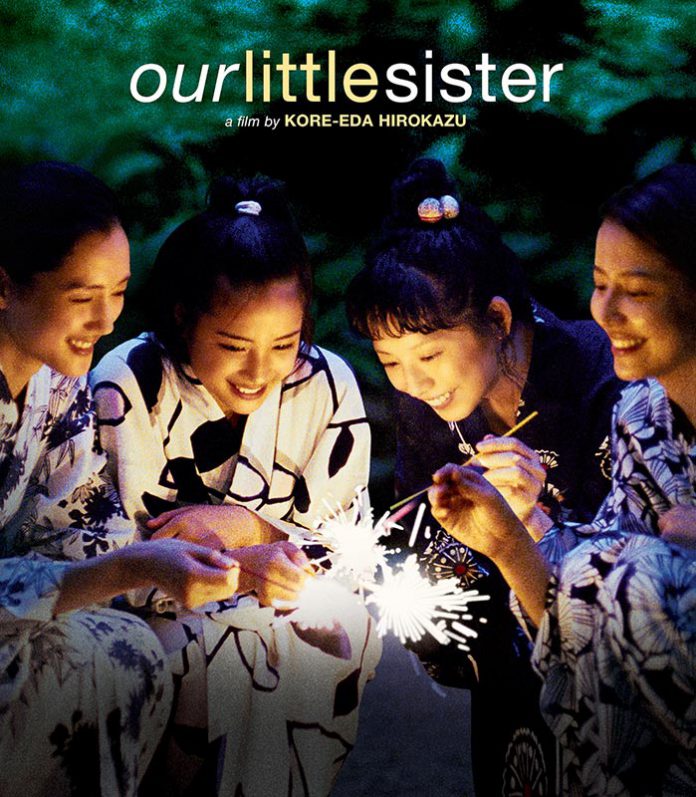 Returning to the M.V. Film Center is the charming, lighthearted story of a Japanese family of siblings in “Our Little Sister.” The film opened the M.V. International Film Festival last month and plays again this weekend.

“Our Little Sister” tells the story of three young women who have successfully patched together a life even though abandoned by both parents. Each has a distinctive personality. The eldest, 29-year-old Sachi (Haruka Ayase) works as a nurse and functions as a substitute for the missing mother. She rides herd on the younger two with a firm hand at the same time that she carries on an affair with a married doctor. Yoshima (Masami Nagasawa), 22 years old, works at a bank, likes to drink, and makes bad choices in boyfriends. At 19, the youngest is Chika (Kaho) who works in a sporting goods store and hangs out with a fellow employee.

When their father dies, the three head dutifully to his funeral in a distant town. There, they discover they have a 13-year-old half-sister, Suzu (Suzu Hirose), by their dad’s second wife. The girl is now supervised by the flaky third wife, Yoko (Yuko Nakamora). Quickly sizing up the situation, the three sisters invite Suzu to come live with them, and she does, entering a warm and supportive environment.

While underlying issues of abandonment gradually emerge, “Our Little Sister” depicts an essentially happy, well-functioning household. The parents may be absent, but that doesn’t mean the sisters don’t enjoy full lives. Food and cooking play important roles, along with other familial activities, as the young women unfold in the cozy nest of the late grandmother’s old-fashioned house. Rituals like making plum wine from a backyard fruit tree are maintained, as well as the traditional tribute to the late grandparents. Others show up to enrich the sisters’ world. These include a great-aunt and a woman who runs the diner they frequent. “Our Little Sister” pays tribute to strong women and a women’s world.

Basing his film on the manga (Japanese graphic novel) called “Unimachi Diary,” director Hirokazu Koreeda relies on medium and long shots instead of more typically American close-ups to frame the sisters’ lives. It is a classically Japanese style, as is the film’s embrace of the natural world and changing seasons. The pace of “Our Little Sister” may seem slow to moviegoers weaned on the nonstop action of American movies. Nor does much melodrama make its way into the narrative. Its pleasures are subtler, and some would say more realistic. Certainly “Our Little Sister” offers a celebratory portrait of Japanese life. Director Koreeda earned a Palme d’Or nomination at the 2015 Cannes Film Festival, and won five awards in 2016 from the Japanese Academy.

A conversation with two witty comedians in ‘The Trip to Greece’