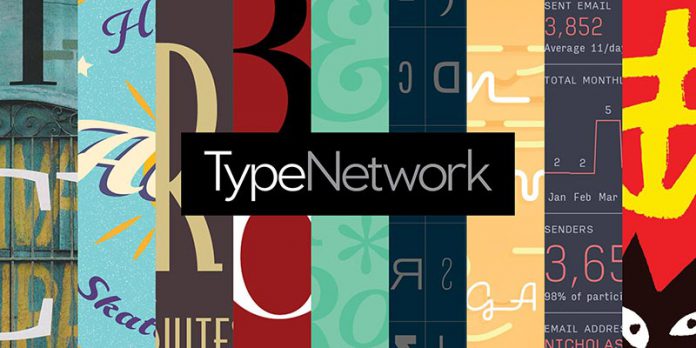 When it comes to fonts, most of us are passive consumers. Type is under our noses all day long — in our TV commercials, our websites, our magazines and newspapers. But most of us — at least those of us who aren’t designers — don’t think much about where it comes from. As it turns out, there is a whole industry surrounding fonts, and some of the most exciting innovation in the business is coming from Martha’s Vineyard.

The Font Bureau was founded in 1989 by Roger Black and noted type designer David Berlow, a resident of West Tisbury. David’s brother, Sam Berlow, joined as general manager, splitting his time between the Vineyard, Vermont, and the company’s headquarters in New York and Boston. In June, the Font Bureau launched Type Network, a sort of “digital mall” where foundries (companies that design or distribute typefaces) can collaborate to make their fonts available to a global marketplace. Sam Berlow is president, and David serves on the board of directors.

The launch of Type Network is just one channel through which the company has risen to meet the ever-evolving technology of the digital age. The Font Bureau was initially created to serve magazine and newspaper publishers grappling to preserve their typographic brand identities as printing moved from traditional presses to digital methods.

“We started off with two markets,” Sam Berlow told The Times. “One was the systems software developers, like Apple and Microsoft, who wanted fonts in their computers so their users could have a large selection of type. The other market was publications. Publications wanted their computers to have the same type that they used to set in metal or in wood.”

The foundry’s first customers included major papers and magazines: the Wall Street Journal, the New York Times, the Washington Post, Rolling Stone, Sports Illustrated, Time, and Newsweek. “Eventually, our clients were almost everyone you’d see on the newsstands,” Mr. Berlow said. And before long, that reach expanded to European and South and Central American markets.

“The biggest change can be seen in television advertising,” Mr. Berlow said. When TV ads first arrived, words were hand-lettered on a print poster. Even until the early 2000s, computer font choices were limited. “Now when you look at a Toyota trucks commercial, you have fonts stacking and crumbling and doing all this really wild stuff. You have really big strong block letters that look like they are made of stone, and they are just hammering in this message how strong these trucks are — but with type.”

In the past decade, the Font Bureau’s clientele have grown to include an array of corporations: Ford, American Express, ESPN, insurance companies, banks, pharmaceuticals. “Whatever typeface they use on their packaging, they want to use on their website, in their print advertising, on TV,” Mr. Berlow explained. “So they’ll buy a typeface and use it everywhere, to retain that same look and feel.”

Fonts are sold based on licenses. There are separate licenses for different uses; desktop, web, applications, and ePubs. Costs then vary based on number of publications, webpage views, or length of use.

“Most companies use the same fonts in print and on the web. That’s an additional license fee. That’s obviously been good for business,” Mr. Berlow said. “What’s been even better is that new web-only companies like ESPN and Slate decided they wanted unique typefaces, so they use high-quality web fonts. That’s been great for business. There are a heck of a lot more websites than there are print publications. They don’t want to use the standard system fonts, they want something unique that stands out and is more flexible. So they get special web fonts from companies like us.”

That’s where Type Network came in: to make finding that unique, flexible font (and the appropriate licenses) easier on designers. It also makes selling fonts much easier for small independent foundries.

“It’s hard for somebody to create their own [type] brand and get the exposure and the marketing and the technology to make their brand available,” Mr. Berlow said. “The tools to build fonts for all of these platforms, the technology to distribute to all of those uses, is very complicated. So we decided that we would share it.” For a relatively small fee, foundries can add their fonts to Type Network. “The idea is to get a group of likeminded people who are designers and developers into one store, to make it easier for customers.”

Another business might have tried to dominate the market with their tools and technology, rather than share the platform with other designers. But that’s not what Font Bureau is about. “Font Bureau has always been the kind of company that develops products and methodology that gets shared,” Mr. Berlow said. “It’s always been an internship/apprenticeship-type company. David learned how to draw type from a very famous type designer, Matthew Carter. David took that experience and taught dozens and dozens of other designers how to draw type. A lot of famous designers have come of that apprenticeship. So it’s always been part of the culture to bring younger type designers in and teach them how to start their own foundry or brand, which opens it up for type designers to be as creative, and as independent as possible.”

That creativity and independence has allowed Font Bureau designers the freedom to dream up the future of fonts. Fonts that are endlessly customizable when it comes to weight, width, and more. Fonts that flex from screen to screen. Fonts that make you want to keep reading them. Or stop reading. And just look.

For more information on the Font Bureau and Type Network, visit typenetwork.com.

Everyday Teaching: How to teach through questions