Nobel Prize-winning American author Sinclair Lewis (1885 – 1951) had a number of axes to grind, and one of them was a hardly surprising denouncement of Adolf Hitler’s activities in Germany. In 1935, Lewis published a novel called “It Can’t Happen Here” about, well . . . it happening here.

In the novel, a charismatic populist senator named Buzz Windrip dazzles an American underclass feeling trampled by the Depression and four years of FDR. He endears himself to a certain rough, uneducated demographic by wooing them with words of racism and misogyny, not forgetting a resounding rah-rah for Second Amendment rights.

Windrip also bribes his voters with a promise of $5,000 annually to each citizen. This would translate, needless to say, to tens of thousands of dollars in today’s economy. Who could resist? He wins the election, despite the misgivings of our protagonist — a doleful, brilliant, liberal journalist named Doremus Jessup.

The changeover to dictatorship is instantaneous and shockingly easy: President Windrip cancels Congress, and whatever other bodies of government lie in his way to total power. Minute Men spear-carriers are reconstituted as a paramilitary group, half-a-million strong, backed by kangaroo courts and military judges. Resisters are taken out and shot. In the twinkle of an eye, concentration camps are slapped up for the overflow of all undesirables. Oh, and look! Mexico, with wink-wink ties to Europe and Russia, is apparently plotting to invade (at least according to Windrip), so he drafts every living male to invade first.

The most frightening part of watching “It Can’t Happen Here” is that it’s impossible to imagine a scenario to defeat this cruel, abrupt takeover. What could we do? Would we ever be okay again? Sinclair Lewis leaves this final question ambiguous.

In 1936, Sinclair Lewis and John C. Moffitt adapted the novel into an ambitious play with 14 actors deployed for 50 roles. The Works Progress Administration subsidized productions across the country. And now, on the 80th anniversary of the play’s inception, the Lewis heirs have released special rights to stage or read the play all over the country, with particular attention paid to libraries and nonprofit groups. Berkeley Repertory Theater took up the torch and premiered its updated new edition this past September, a full staging with waving flags, stage-wide skirmishes, and even rousing Sousa music.

At the Vineyard Haven Library, program director Betty Burton received notice of free usage of the play and leapt into action. She turned to Vineyard Haven thespian, opera singer, and artist Paul Doherty to assemble a cast from the homegrown group of which he is a member: The Peter Luce Play Readers.

On Oct. 26, 17 play readers sat across a long table, taking up the full latitude of the main room in the VH Library. A crowd of over 70 viewers sponged up the seats, with some standing room only members of the audience peering in over the DVD stacks.

Every actor was humongously talented, but a few stood out in the primary roles: David P.B. Stephen played the half-endearing, half-terrifying tin-pot dictator. John Brannen as journalist Jessup presided over the table as a sort of Conscience of the Country character. His wife, played by Nancy Cramer, captured an amusing caricature of a 1930s housewife: As the family bolts in a truck, pell mell through a snowstorm, in a desperate attempt to flee over the border to Canada, she asks from the backseat, “Does anybody want some coconut layer cake?”

On the far left side of the blossoming fascism, the other two huge political groups of the times were represented by Esther Hopkins, spouting the “evolutionary change” promised by Socialism, whereas Gaston Vadasz as a genial Communist is all for a big shakeup. He’s perversely attracted to the campaign of the mad Windrip because he expects the unfolding savage policies will pull comrades everywhere onto the playing field. Long live the Revolution! It’s just a question of getting it started. Wayne Greenwell, donning glasses or, on other occasions, a blue cap, dodges in and out of two decent gentlemen, and one pernicious Windrip thug.

Ellie Beth plays Lorinda, a snappy liberal-turned-underground activist, and a natural love interest for poor lonely Doremus married to the coconut cake lady. Betty Burton’s daughter, 28-year-old Grace, allowed herself to be co-opted into the reading for the sake of widening the age span of the mostly white-grey-silver-haired cast. And Felicity Russell as Doremus’s daughter Sissy, captured the devil-may-care, “nasty woman” role of the newly independent females of the 20th century.

One might expect that the charged topical content would generate audience discussion after the imaginary curtain came down. However, as The Berkeley Repertory Group realized, their audience base was already too emotionally wracked by the dual meat-grinder of the play and our current election cycle to have any remaining energy to talk further.

Vineyard audience members were left to drift out, either depressed or re-energized or in need of a stiff drink. 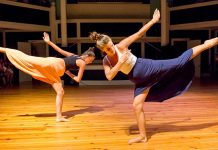 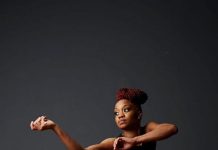