Voltaire, in “Candide,” may have summed it up best, that one must cultivate one’s own garden. He means that we must get on with the everyday tasks of life and not be overly concerned with matters beyond our control.

Observation of what you are doing seems to me to play a large part in garden craft. Initially it is perhaps to figure out what it is one wants to achieve, and what is possible. Later on, it develops as part of the absorption — entertainment in itself — with which we gardeners tend our projects. The trope of the orchid collector comes to mind.

Whether it is the overall aesthetics of one’s space, a particular category of floral perfection, the most colossal tomato — or maybe only some cacti on a tabletop — the more one pursues it, and the more observations accrue, the more one has cornered a sense of accomplishment. Mastery is of course never met, because one is always resetting the goalposts to another level, or vision.

Providing the conditions under which the garden thrives is central to garden craft. The spirit of place includes awareness of light levels, winds and air movement, and whether damp or dry. Knowledge of right plant, right place is intuitive to some, laboriously acquired by others. Take the time and try to learn to promote and protect your garden as effectively as possible, whether the problem is deer, rabbits, poor soil, erosion, diseases, or other affronts to the garden’s perfection or the gardener’s sensibilities.

My friend desired to plant a maze, which he furnished with Siberian elms. They turned out to be plants unsuited to the task, and now he is a wiser maze maker and practitioner of that particular craft. I planted a wisteria at the base of a valuable oak, which is now threatened by the wisteria. I understand the vine must go. I observe a planting of spruce being installed in dense oak woods and wonder, how will they have fared in five years? Every garden has similar episodes, based on observation and experience.

Sprays and scent deterrents are available for gardeners to use for plant protection, but they are means that are termed “passive.” If your garden or landscape is under serious deer pressure, it is probably better to rely instead on “active” protection: netting, wire fencing, and staking.

This seemingly entails a lot of effort. There is determining what you need, purchasing it, fabricating it, and maintaining and checking it to ensure its effectiveness. Many landscaping contractors can do it for you if it is an overwhelming prospect, but do-it-yourself is an option for those who are willing to take on a mundane project in a careful, even meditative, fashion.

If you are thinking of DIY, might I suggest going to Polly Hill Arboretum to check out deer protection? In accordance with its mission as a plant resource, PHA grows and showcases many plants that deer like to eat; and together with that mission as a teaching institution, the PHA grounds exhibit well-constructed deer and rabbit protection.

Pictured is carefully made caging for low-growing azaleas, one of several located near the entrance to the Visitor Center. The surround is green, coated wire, which is available in several heights, starting at 18 inches. The supports are pieces of natural bamboo cut to size and wired to the green surround. The lid is black, coated poultry wire, carefully bent over to clasp the top tier of green surround. Altogether, they are a nice example of garden craft that should do its job to protect the plants they enclose.

Nearby the above-mentioned protective cages at the Arboretum Visitor Center is a plant that does not need them: a fine and colorful planting of deer-resistant male skimmia, Skimmia japonica. Although I have previously written about skimmia, it seems worthy of another mention, particularly at this time of year when garden interest diminishes, along with dwindling photons.

Like the better-known green and red holly, Skimmia japonica is an example of a category of plants that have separate male and female genders. Also, like holly, the pollen from the male plants’ flowers pollinates the females’ flowers, resulting in attractive red fruits. The term for this group of separately flowering plants is dioecious (“di-ee´-shus”).

Both male and female skimmias should be planted in more Island gardens. Female skimmias’ fruits, bright against evergreen foliage, are the entry-point attraction for many who plant skimmia; male skimmias are in subtle contrast to those showy females. Nevertheless they put on quite a show at this time of year, as the photo shows.

From late summer onward, the male plants cover themselves with budding flower trusses. These continue to deepen in color until they become a dusty pinkish burgundy, becoming more and more noticeable and effective through the winter. In spring, the small individual florets open with white interiors, and the pollen becomes available to fertilize the flowers of skimmia females.

Prolonged and mild Island autumn is a wonderful gift, but still annoying to the gardener who wishes outside work to be over and done with. Rule of thumb: Cut down what is brown and yellow; leave what is green. For wildlife, leave seed heads if not spent.

Some things to look for: hardwood and vining seedlings in hedges and shrub borders. Bittersweet and English ivy continue to make growth in autumn.

Lift and divide perennials now: soils are damp and the cutback divisions will have a chance to settle before soils are affected by frost. Mulch the divisions afterward.

Hop right on this Island tradition 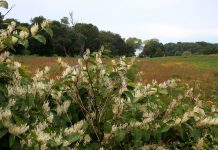