It’s been eight years since singer-songwriter Elizabeth Straton performed on Martha’s Vineyard, the Island she called home for almost a decade. This weekend she’s returning to her her favorite Island venue, the Katharine Cornell Theater, for a one-night-only show. The performance will be a record release party for her latest album, “Green Envy.”

The show will mark Ms. Straton’s first performance in support of her fourth album. She will subsequently perform songs from “Green Envy” in New York, Boston, London, Edinburgh, and elsewhere.

Ms. Straton has gained a considerable following in Europe after living in Spain for many years. In the past, she performed regularly in Boston and at venues such as Folk City, the Bottom Line, and the Bitter End in New York City.

The singer-songwriter lived on the Vineyard for two separate stretches of time: during the early 1990s, and then again from 2005 to 2012. While living here, she taught music and Spanish at the Charter School, as well as at the West Tisbury and Chilmark schools. She also gave private music lessons. Her last performance here was at the Ag Hall as part of a fundraiser for the West Tisbury library, with David McCullough and Livingston Taylor as special guests.

Ms. Straton’s career took off in 1992 when she was selected as one of the artists to represent the U.S. at the Universal Exposition in Seville, Spain. She has been a featured festival and radio artist in cities all over Europe and the U.S. Ms. Straton is a former recipient of the New York City’s “singer-songwriter” award, and has composed and performed soundtracks for many documentary films. She also sings with classical choirs, and has performed in that capacity at many prestigious venues including the Royal Albert Hall and Lincoln Center.

Among the critical acclaim Ms. Straton has received are reviews from Bob Sherman of WQXR, who called her music “unique and wonderful … pictures to listen to.” Steve Israel of the Times Herald Record praised the artist as “an ethereal and utterly original singer-songwriter with a pristine voice that’s as light as lithe as it is seductive and soulful.”

Ms. Straton, a native of Warwick, first landed on the Vineyard in 1992 after completing a BBC-sponsored tour for her second album, “Red Tide.” She wrote all of the songs for her third recording, “Blue Canoe” and half of the songs for her current release while living in Menemsha.

Upon winning a grant, she moved to Spain. There she was introduced to Andrew Lloyd Webber, who requested a meeting after he heard her music in a cafe in the village where they both lived. The famed composer called her work “utterly lovely.”

In 2005, Ms. Straton returned to the Vineyard to raise her two children. Seven years later, she moved back to Spain after receiving a substantial grant to write a children’s opera. Last year she relocated to Saratoga Springs, N.Y., in order to enroll her two teenage children in its well-known Waldorf School. Ms. Straton teaches music to children and adults while continuing work on the opera, which is based on William Blake’s illustrated collection of poems, “Songs of Innocence and Experience.”

Once her kids have finished school, Ms. Straton promises that she will be moving back to the Vineyard. She explains her attachment to the Island, saying, “The people are an exceptionally rare tribe. I love ocean and the power I feel standing on these shores. I’m inspired to be creative there. I love the weather, the wind. I think I feel most creative when the elements are at their biggest. I have every excuse to go sit by the fire with a glass of whiskey or wine and write.”

Record release for Elizabeth Straton’s “Green Envy”: Saturday, Nov. 12, at 8 pm at the Katharine Cornell Theater, Vineyard Haven. Tickets are available at the door, $25 per person. Children 12 and under, free. The show is a benefit for Children’s Education Programs through Art and Sci 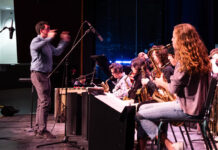 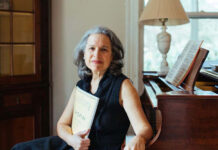