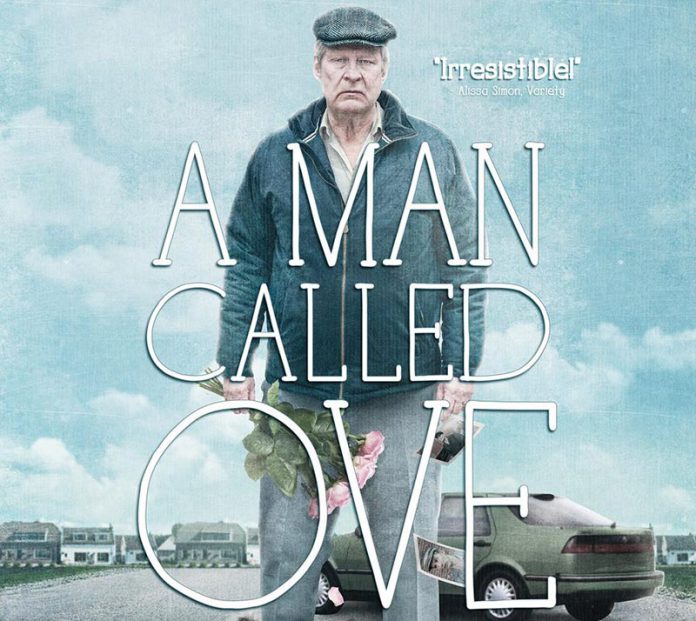 The Swedish film “A Man Called Ove” plays at the Martha’s Vineyard Film Center this weekend. This black comedy follows the struggles of its hero to deal with his wife’s recent death.

Foul-tempered Ove (Rolf Lassgärd) has recently been ousted as head of his condominium’s association. At 59, he loses his railroad job despite 47 years of service. These two setbacks don’t stop him from making the rounds of the complex and enforcing its rules. He yells at drivers who attempt to negotiate a byway closed to cars. He directs nasty epithets at one neighbor’s miniature dog. He tries to scare away a stray Persian cat. When he visits his wife’s grave with flowers, the source of his ill humor becomes clear. Flashbacks reveal how as an inept young man he met and fell in love with the charming, sweet-natured Sonja (Ida Engvoll), and once was a happy man.

Now, a miserable Ove wants to join Sonja in the afterlife, so he devises a number of ways to commit suicide. Lest these attempts make the film seem too grim, Ove doesn’t succeed for a number of ridiculous reasons. One concerns the arrival of a new Iranian neighbor, Parvaneh (Bahar Pars), her husband Patrick (Tobia Almbarg) and their two daughters. They infuriate Ove for a number of reasons. The couple drive their auto and trailer up the forbidden roadway to their new quarters, and Parvaneh accidentally backs into Ove’s mailbox. Then they have the nerve to ask Ove to lend them a ladder, followed by Parvaneh’s request for driving lessons.

In one of the film’s standing jokes, Ove has a running battle over car models. The viewers learn in a flashback that Ove’s taciturn father favored Saabs, initiating Ove’s devotion to the Swedish auto. His former friend, the neighbor who ousted him from association leadership who is now paralyzed by a stroke, favors Volvos. He eventually acquires a BMW, which puts the kiss of death on the friendship.

Ove’s neighbors won’t give up their efforts to keep on friendly terms with him. Parvaneh in particular ignores his cantankerous behavior, bringing him food and insightful conversation, even asking him to babysit. A young mailman — once Sonja’s student — asks Ove to take in a gay friend who’s been kicked out of his parents’ house.

Working from a best-selling Swedish novel by Fredrik Backman, director Hannes Holm wields a deft hand at portraying such a sad soul, his community, and the healing process that takes place. The Swedes are masters of this form of comedy, which does not rely on the pratfalls or crudity common in American films. Initially painting a picture in dark tones, the director uses a dry humor that incorporates a distinctly Swedish form of realism.