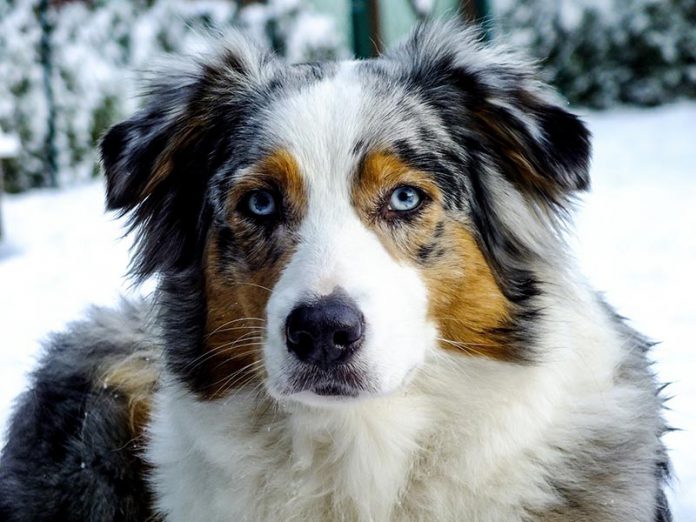 Jupiter is a handsome Australian shepherd with a lush tricolor coat. Adopted at 4 years old from a rescue organization, he has one eye with a small misshapen pupil, giving his face an asymmetrical appearance. He is slightly hearing-impaired, but other than these minor quirks, seemed a robust, healthy specimen. Over the years we saw Jupiter primarily for routine care and small concerns. Skin infection. Tick-borne disease. Lumps and bumps. His owner mentioned in passing that once or twice a year Jupiter exhibited an odd behavior, almost like a mini-seizure. Each time it had occurred, Jupiter was “running around like crazy” with another dog, when he would abruptly lose control of his hind end and collapse. The episodes were extremely rare, and lasted less than a minute, after which Jupiter would pop up, seeming completely fine. Physical exam didn’t reveal any abnormalities. The spells were always associated with intense exercise. Always brief. Always with rapid recovery. Didn’t sound too serious, I thought, and advised his dad to report back if they became more frequent or severe.

When he was 8, Jupiter developed a slight heart murmur. “We could do a baseline cardiac workup,” I offered. “Chest x-rays. Maybe consult a cardiologist.” But since Jupiter was rambunctious as ever, we weren’t overly concerned, and diagnostics were not pursued … until this fall, when Jupiter suddenly had multiple collapsing episodes within one month, and also developed a cough.

There are many questions when an animal collapses during exercise. Is it fainting? A seizure? Muscle weakness? An orthopedic problem? Does the animal lose consciousness or seem to be in pain? The fact that Jupiter’s spells were so brief, that he rebounded immediately, and had no pain, meant we could probably rule out many diagnoses like intervertebral disc disease, spinal cord tumor, or serious trauma. I began to wonder if Jupiter might have a condition called “exercise-induced collapse.”

Exercise-induced collapse (EIC) is an inherited disease first identified in Labrador retrievers. An autosomal recessive genetic mutation, it affects neurotransmitter function in the brain and spine. Symptoms usually manifest by 3 years of age. Affected dogs can handle mild to moderate exercise, but when they really get going, after five to 20 minutes, they may get weak in the hind legs and collapse. They remain conscious and do not seem to be in pain. It doesn’t happen every time they exert themselves. Intense exercise, excitement, and elevated body temperature create increased demand for neurotransmitter transmission, so these conditions are common triggers, but different dogs may have different triggers, and not all have been identified. Once they stop running, they quickly return to normal, but if allowed to continue exercising, seizures and death have been reported.

The EIC mutation has now been identified in many other breeds. My texts listed Chesapeake Bay retrievers, curly-coated retrievers, Boykin spaniels, German wirehaired pointers, Pembroke Welsh corgis, and Labrador crosses. Might Jupiter, the Australian shepherd, also be at risk? Research took me to the University of Minnesota College of Veterinary Medicine website about border collie collapse (BCC). The site reports that BBC, “an episodic nervous system disorder … triggered by strenuous exercise … is recognized throughout North America, Europe, and Australia, and is observed in dogs used for working stock, as well as dogs participating in agility or fly-ball competitions, or repeatedly retrieving a ball.”

Did I hear “Australia?” Like in Australian shepherd? The website continues: “This disorder has also been called exercise-induced collapse (EIC), exercise-induced hyperthermia, stress seizures, and ‘the wobbles.’ Affected dogs are normal at rest and seem healthy. Typical collapse episodes begin five to 15 minutes after onset of exercise. Dogs are abnormal for five to 30 minutes, but then recover completely with no residual lameness or muscle stiffness or discomfort.” Scrolling down, they go on to say that a similar condition occurs in Australian cattle dogs, herding border collies, Australian kelpies, bearded collies, collies, Shetland sheepdogs … and Australian shepherds. Maybe we had our diagnosis.

I emailed the researchers, asking about genetic testing Jupiter, but they replied their research was specifically on border collies. They added that videos of collapsing Australian shepherds looked “strikingly similar to BCC” and offered to evaluate footage of Jupiter. I called Jupiter’s dad, asking him to bring the pup in for an exam … and to make a video. “Take him out running with his buddy. See if that induces an episode you can record,” I proposed. Despite some misgivings, Jupiter’s owner gallantly complied. But once I examined Jupiter, ran bloodwork, took radiographs, and consulted online with specialists, including sharing the video, our focus changed dramatically. An enlarged heart, worsening cough, and increasingly loud heart murmur made concerns about heart-related disease take top priority. A prompt trip to the cardiologist resulted in a diagnosis of congestive heart failure.

I was confused. Congestive heart failure can cause collapse during exercise, but it doesn’t come and go. How did this diagnosis explain those rare but repeated, benign-seeming spells from the previous four years? I asked the cardiologist. He, too, could not definitively link the earlier episodes to the current diagnosis. The only way to assess Jupiter’s heart function when collapsing now would be by attaching a portable ECG recording monitor to him, then inducing an episode through exercise. The risk was too great. Considering his current heart failure, the cardiologist said, we were lucky Jupiter hadn’t died while exercising. I was just grateful he had survived the moviemaking I had solicited.

Jupiter may well have the EIC genetic mutation in addition to his cardiac issues. Dogs with EIC often improve with maturity, and after neutering, probably because of an overall reduction in excitability. They can live normal lives, with normal life expectancy, as long as triggers such as intense exercise and excitement are avoided. Jupiter’s situation is different. He is responding well to heart medications, but his long-term prognosis is guarded. I decided to send the video to the BCC folks anyway. I’m waiting to hear back … but “running around like crazy” is no longer an option for Jupiter, in any case. 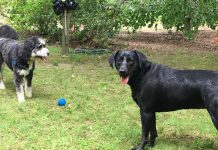