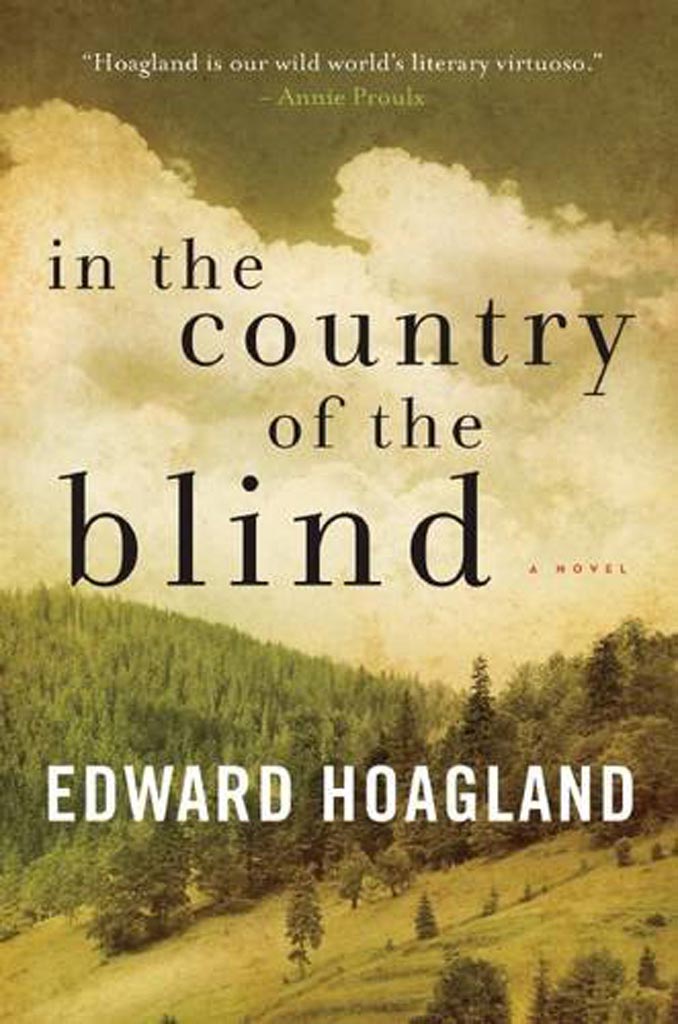 Best known as a highly regarded essayist, Edward Hoagland of Edgartown has also written three novels. The first, “Cat Man,” published in 1956, came two years after he graduated from Harvard. His latest, “In the Country of the Blind” (Arcade Publishing, 2016, 184 pages), is set around 1970 in the northern reaches of Vermont, where Hoagland has a cabin that he’s retreated to over the years for a quiet spot to write and to live as simply and as close to nature as possible.

Starting from a privileged upbringing in Manhattan, Hoagland has pushed himself to see as much of the world as possible, particularly the natural world, refusing to be limited by a stutter that would have kept most of us much closer to home, physically and emotionally. He could have hid out in an ivory tower, content to nourish himself with the ideas of others, and express himself by interpreting those ideas. To the many readers he’s entertained and enlightened over a celebrated 60-year writing career, his choice to get out and taste life firsthand and then share what he saw and heard and smelled and touched has been a godsend. Although blindness has curtailed his roving lately, he still has a broad, rich panorama of experience in his mind’s eye to draw on.

In the new novel, the protagonist finds himself in a remote spot in Northern Vermont, within hiking distance of the Canadian border. Known to us only as Press — short for Prescott, surname never supplied —it’s not clear whether he was lured there by the gentler, uncomplicated rural lifestyle or if he ended up there by default. Recently divorced from Claire, the mother of his two teenage children, he’s a long way from his previous life as a buttoned-down suburban New York stockbroker with a country club membership and a Volvo in the garage.

It’s up to us to wonder what went wrong, with the lifestyle or with Claire, but if it was suffocation by either, he finds out in his new situation that his advancing blindness may be equally hobbling. The cast of characters he now depends on seem dead-on for a remote New England village. The Swinnertons, on one side, are slightly worldly, since Karl saw action in Europe at the end of World War II, and Dorothy writes a column for the local paper and has at least dreamed of going to Paris. Darryl and Avis Clark, by contrast, are dairy farmers who never question their quiet cocoon of daily chores and evangelical Christianity. Both couples include Press in their lives, which he appreciates, though perhaps only out of necessity.

With bleak prospects shrinking daily, it’s not surprising that he latches on desperately to Carol, a hippie from a nearby commune whom he meets by accident one day when he’s stumbling up a stream near his home.

It seems no accident that she also has two children and that her name is so easy to interchange with his ex-wife’s. Curiosity about each other attracts them mutually, and a quirky but warm affair develops. But while she’s content to enjoy him as a diversion, almost a toy, he gropes for more, and eventually he’s left alone again, left to his own devices, in which, because he feels them diminishing, he has less and less confidence. He never quite gives in to self-pity, but until it’s clear how far at sea he is, he seems something of a loser, both to himself and the reader.

But as Hoagland writes in a five-word sentence buried in a long paragraph two-thirds of the way through the book, it was both simpler and much more complicated than winning or losing: “What he wanted was footing.” Twice spurned by women with two kids who needed a reliable provider, there’s a chance that Press might find himself permanently adrift were it not for Melba, a crusty, crispy character like the toast she shares a name with, a weathered woman who has seen more in her long life than Press can even guess at. For pizza money, Melba cleans his house now and again. Better yet, she likes to talk, and listen — the latter a lifesaver for Press because he felt free “to blab everything out, his worries and speculations, hoping her upside down worldliness might jigsaw into alignment with his.”

With no love interest between them, Press sees her as unthreatening and steadfast. For her part, she’s neither spooked nor overly impressed by men, because, as she tells Press, “I’ve never known a man who wasn’t scared of more things than I was.”

Still, Press wants something more, so signs on to a road trip with Chuck, a charming but flaky ne’er-do-well who convinces Press to keep him company by telling him, “I don’t know where I’m going anyhow, and neither do you.” It’s not particularly surprising that the car ends up in a ditch, with Press trapped inside and Chuck hightailing it with a satchel and a gun, but not before he’s called for someone to come fetch Press, who once again finds himself dependent on others to guide him out of a jam.

If it sounds like a straightforward yarn, it evolves into anything but, thanks to Hoagland’s ability to tease out the complexity of a dramatic turn, transform a caricature into a character, with just a few words placed in just the right spots — a sleight of writing that befits someone who worked in a circus during college. You get the feeling that you are in the hands of a master, without even feeling them.

His is an unconventional style, casual and conversational, with abrupt transitions, even two speakers quoted in the same paragraph, but it’s the way a story usually unfolds, with asides and tangents and flashbacks. It’s easy to hear it being introduced by someone saying, “Did I ever tell you about the blind guy I met in Vermont who was trying to get to his neighbors for tea — on a bike?”