Edgartown selectmen zipped through their scheduled meeting in under 10 minutes Tuesday night, Dec. 27. Selectman Arthur Smadbeck and chairman Margaret Serpa were the only members in attendance. The board took the following actions:

After the selectmen adjourned, selectman Arthur Smadbeck told The Times that short as it was, the preceding meeting was not the shortest one in memory. He recalled a selectmen’s meeting chaired by Michael Donaroma that lasted about four minutes. 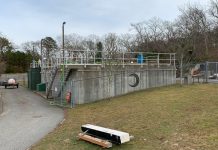