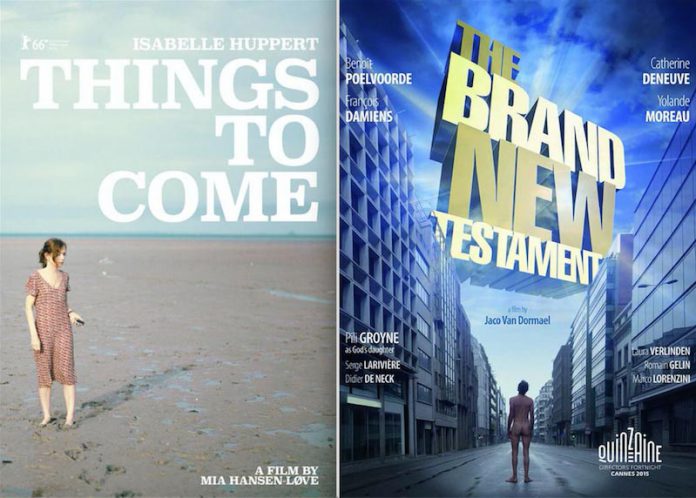 Picture God as a nasty, pajama-clad Belgian, and you’ll find yourself ready to watch “The Brand New Testament,” playing this weekend at the Martha’s Vineyard Film Center. Also opening is the Isabelle Huppert vehicle, “Things to Come,” about a philosophy professor facing a lot of setbacks.

While God (Benoit Poelvoorde) may be the father, the true star of “The Brand New Testament” is his 10-year-old daughter Ea (Pili Groyne), who narrates the film and controls the action. The joke in Jaco Van Dormael’s satirical fantasy is that the deity plays a lot of nasty tricks on the human race. In creating the universe, he plants a menagerie of animals in unexpected places where a buck-naked Adam wanders. He manufactures a lot of annoying rules like dictating that whatever line you’re in, the other will go faster. Or that toast always lands jelly side down. Murphy’s Law reigns, thanks to this God. And he treats both his wife (Yolande Moreau) and his daughter Ea with tyrannical disdain.

Then Ea takes matters into her own hands. She hacks into her dad’s computer to steal Deathgate, his diabolical scheme for letting everyone know the exact time of their death. She escapes from her father by disappearing down a laundromat portal and entering the earthly world. Once there, she decides to add six more apostles to the familiar 12. The first with a new gospel is Aurélie, a lovely young woman missing a hand. Soon to follow are gospels by bird-loving Jean-Claude, sex maniac Marc, killer François, housewife Justine, and Willy, a boy who wants to be a girl. The most recognizable is Justine, played by the legendary Catherine Deneuve. Justine’s story is the most blatantly comical — she falls in love with a gorilla.

Director Van Dormael lifts many of his plots from other movies like “Max Mon Amour” in the case of Justine, or “Ma Vie en Rose” for Willy’s story. Underlying his waggish retelling of Christianity’s origin story are more serious questions, like what a person might do if they learn when they will die. Filmgoers will either find “The Brand New Testament” enjoyably silly, annoyingly obtuse, or disturbingly heretical.

In the French film “Things to Come,” Isabelle Huppert plays Nathalie Chazeux, a philosophy professor who leads a life of the mind. She tells her students that if one has desire, happiness is not necessary; she asks them if truth is absolute or debatable; and she quotes Rousseau. Director Mia Hansen-Love balances such intellectual discourse with scenes from Nathalie’s domestic life. Although she is in control in the classroom, her private life begins to fall apart. Her husband Heinz (André Marcon) leaves her for another woman; her neurotic and demanding mother (Edith Scob) dies; her publisher decides not to reissue her textbook.

On the surface, Nathalie seems to take these mini-disasters in stride. She is depicted as a woman who marches, even runs, through her days. As cerebral as she is, she begins to cope with her feelings as life catches up with her. She develops affection for her mother’s cat, Pandora, whom she must adopt, although the cat is an initial annoyance. Her former student Fabien (Roman Kolinka) becomes a friend she can rely on both intellectually and emotionally. For the first time in her life she has found freedom, she tells him. Liberating, yes, but with plenty of challenges. Nathalie’s life does go on, and it does so in settings that are suggestively beautiful and vibrant.