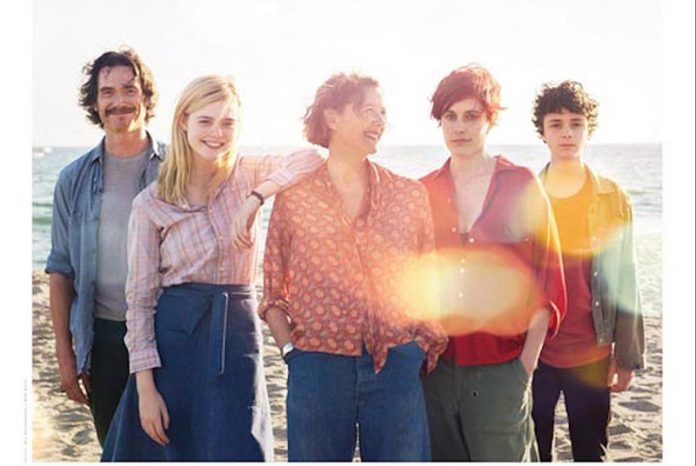 After a gorgeous overhead shot of a rhythmic ocean, Dorothea’s car goes up in flames at a mall and is replaced with an aging VW. Cut to chain-smoking Dorothea and Jamie in the decrepit Victorian fixer-upper Dorothea is working on with William, who mostly floats in the background.

Based on a series of comic anecdotes but no real plot, “20th Century Women” follows Dorothea’s loopy attempts to guide her son into manhood. She supports Jamie’s forged notes for skipping school. Stopped for a traffic violation, she gets arrested for her wisecracking, snarky banter with the cop. She’s an unconventional kook offering lots of jokes.

Dorothea enlists Abbie and Julie as allies in her attempt to help Jamie grow up. As such, Abbie feeds him feminist theory from the likes of “Our Bodies, Ourselves” and “Sisterhood Is Powerful.” Explaining female orgasm to a fellow skateboarder earns Jamie bruises and a black eye. He’s a burgeoning feminist. Julie frequently climbs into his bedroom and sleeps with him. No sex is involved, however. The cerebral conversations are pure California parlance leading nowhere except to a lack of communication.

Music including the Talking Heads and the Clash sets the ’70s soundtrack, and in her attempt to better understand her son, Dorothea, a child of the Depression, heads to youthful nightclub hangouts. The director also uses archival black-and-white footage, psychedelic color separations, and voiceovers to explain these comically inclined characters. Dorothea mugs a lot, Abbie recovers from cervical cancer, and Julie endures teenage group sessions headed by her therapist mother. One compelling trip into the past is Jimmy Carter’s “crisis of confidence” speech, which echoes current political inclinations.

Underlying the nurture of her son is how Dorothea will face the future. Jamie’s father left the family long ago, leaving little connection with his son. Resistant to any new relationship, Dorothea keeps her distance from potential suitors. The liberal sexual mores of the period permeate the younger characters’ lives. Abbie hooks up with William, Julie has sex with plenty of boys except Jamie, who longs for her without success. “20th Century Women” is a movie that celebrates the past, and the women who gave it substance.