Six years of permitting battles, contractor gaffes, and legal tussles have finally come to an end for Jayne Leaf, longtime owner of Wave Lengths Hair Salon in Edgartown. In a tense, hourlong hearing on Tuesday night, the Edgartown Planning Board (EPB) unanimously voted to allow construction to proceed on the partially completed Wave Lengths building, but with some conditions attached. The building has been sitting untouched since the EPB slapped Ms. Leaf with a stop-work order in July, saying then that the structure was substantially different from the plans the board had originally approved.

The motion to approve, which was made by Mr. Cisek and seconded by Mr. McCourt, had conditions attached regarding some of the unapproved changes made to the building. The details of the conditions were not all specified at press time. Georgiana Greenough, assistant of the EPB, told The Times that in the next 10 days she will meet with Leonard Jason, Edgartown building inspector, to gain a better idea of the specifics going forward.

“They will be allowed to build a lot of it, but not all of it,” she said after the meeting. On Wednesday she clarified that the EPB wants the building to be shingled, have window shutters put in, and have a wastewater system installed. The major issues the EPB discussed on Tuesday night, however, would be dealt with, she anticipated, at next month’s meeting on March 7.

Also attending the EPB hearing were Phil Miller of Miller Starbuck Construction, based in Mashpee, and Colin Young, the project manager. The issues concerning to the EPB pertained to unapproved changes made to the building, which included a third-story porch moved from the back to the side of the building, larger dormers on the third floor that added 250 square feet to the project, and a bulkhead entrance to the basement.

There was also an elevator enclosure that exceeded the town height restriction of 32 feet. Mr. Wilson made a motion to approve the elevator, because if the board asked for its removal, it would be “detrimental” to the project. A condition was added that the builders make the outside look like a widow’s walk. Mr. McCourt seconded the motion, and the four voting members unanimously approved it.

Michael McCourt, EPB member, said at the meeting that the job of the board was to “make things fair,” and that although the permitting process in this particular case was not followed, looking to cast blame wasn’t going to finish the construction of the building on Upper Main Street. Mr. McCourt noted that the building was suffering damage as it sat unfinished, and that tearing it down was not a viable option because “a lot of sweat and tears” have gone into its construction.

“I think it’s our job to get this thing completed, and completed in a way that’s acceptable to its surroundings,” he said. “And I think we can do that as a board.”

More than 30 people in the audience — many who overwhelmingly voiced support for Ms. Leaf and urged the project’s completion — applauded Mr. McCourt’s statement.

Stacy Wallace, an Edgartown resident and client at Wave Lengths, voiced her support of Ms. Leaf. “She’s a hard worker. She’s an active, supportive member of our community,” Ms. Wallace said. “And I feel like as neighbors, we need to support each other.”

Trip Barnes, a commissioner at the Martha’s Vineyard Commission (MVC), was at the meeting representing Adam Turner, executive director at the MVC, who couldn’t attend. He said the MVC had thoroughly reviewed the project, that he was “shocked” it was still an issue at the EPB, and that he hoped the board would show “mercy.”

“The whole thing is a comedy of errors,” Mr. Barnes said.

The original plan, approved in December 2010, was to demolish the one-story building at 223 Upper Main Street in Edgartown, and replace it with a 5,300-square-foot mixed-use building with three two-bedroom apartments, and to build a three-story, 4,200-square-foot mixed-use building at the back of the lot. In February 2011, the EPB found “a lack of vehicular outlet to adjoining properties,” and granted approval only for the larger of the two buildings.

According to a three-page narrative submitted to the MVC by Mr. Young, construction was then delayed for four years because the Wave Lengths co-owners got into a dispute that had to be resolved in Land Court. The project moved forward when co-owner Jayne Leaf bought the property outright.

After construction began last spring, problems arose when it became apparent the structure taking shape was different from the one that had been approved. The EPB made a site visit in late June, and construction came to a screeching halt on July 29 when Mr. Jason issued a stop-work order.

Mr. Young said that the wrong plans were sent to Dartmouth-based GoModular, builders of the prefabricated structures, and that the change would have been caught by the original architects, Sullivan + Associates, who had designed a traditional wood-frame “stick construction,” but that working relationship had ended due to a shortage of funds.

Three subsequent public hearings at the EPB led to the project’s referral to the MVC as a development of regional impact (DRI) on Oct. 18, which then led to a public hearing at the MVC in late December.

It was the second time the MVC had reviewed the project in the past six years.

At that hearing, the MVC unanimously approved the current plans for the Wave Lengths building renovation. In an unusual move, commissioners unanimously voted to go directly to deliberation and decision after the hearing was closed, and the commission quickly approved the project 13-0. The project then was sent back to the EPB for final approval.

With no opposition from the public or the MVC, the EPB decided to allow the renovations to continue. As Mr. Miller said to the EPB, “It’s an empty building. It doesn’t benefit anybody to have that building unfinished. We have damage that we have to control. It goes from a hardship to a severe hardship, and we’re headed toward a severe hardship.” 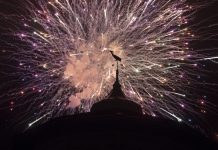