There is nothing like a black-and-white day of “wintry mix” to intensify the colors of the landscape. The plain palette of winter disappears, replaced by deepening in the colors that are present. Roadside puckerbrush turns deep red, while the bull briar threading through it positively blazes greenness. Any old dead oak or beech leaf becomes a thrilling shade of copper never evident in the thin sunshine of a mundane winter’s day.

The Feb. 9 storm graced Island vistas with short-lived lacy effects and Christmas-card evergreens draped in snow. It seems that this year our winter experience is to be the yo-yo model: intense but intermittent and transitory, then back to freeze and thaw. One day we have springlike conditions, pruning the roses; two days later, woodlands glittering with ice traceries, sledding, brilliant blue skies crossed by magnificent, briskly moving cloud formations.

Winter interest in gardens is a ho-hum topic during the warm part of the year, and becomes a more absorbing one now as we await spring. It is supplied in all sorts of surprising ways: blotchy bark and colored branches; tiny flowers of lowdown snowdrop, iris, and winter aconite bulbs; swordlike yuccas; prominent catkins and buds of alders, willows, and magnolias; heathers and heaths. These are things we do not focus on much during high garden season.

Do a library and periodicals search for books and articles on the garden in winter. A good source book is Adrian Bloom’s 1998 “Year-Round Garden” (Timber Press), and a book of inspirations is Rosemary Verey’s “The Garden in Winter” (alas, my copy is missing). Most of the major garden periodicals produce spreads in every fall or winter issue on techniques for adding some fascination to one’s garden in the off-season.

Take for instance carex. They are tough-leaved, grassy plants in the sedge family (“Rushes are round and sedges have edges”) that are well-represented by some 40 species here on Martha’s Vineyard. The plants used for winter effects are not found wild in the Island habitat, however. The Polly Hill Collections List contains nine carex plantings. The one pictured, listed as Carex hachijoensis ‘Evergold,’ is located in Hilly’s Garden, near the visitor center. This display garden is richly planted to offer color and texture in winter as well as in warm weather. It is the location for several clumps of ‘Evergold.’

From the photo alone, it is clear that ‘Evergold’ (also identified in other sources as C. oshimensis and C. morrowii) is an eye-catcher, but there are other selections in the same series. Plant Delights Nursery is a good source, for these, including ‘Everest,’ ‘Everillo,’ and ‘Eversheen.’

Other species of carex that offer up distinctive selections: Carex morrowii ‘Ice Dance’ is a good one (also planted in Hilly’s Garden at PHA). So is Carex elata ‘Aurea,’ Bowles golden sedge. Carex as a group of garden plants are undemanding, deer- and rabbit-resistant, and generally appreciating partially shaded soils on the moist side. That said, there is a carex for all situations, part sun to woodland shade, moist to sandy/dry soil. My favorite, although not particularly noteworthy in winter, is C. pensylvanica, which produces a tough “woodland grass” and thrives in dry Island situations; it is available as an MV Wildtype plant from Polly Hill.

Despite their superficial similarities, I prefer carex’s ornamental effects to liriope and ophiopogon. Plants of carex are more assertive, hardier, and trouble-free than the latter two. The plants slowly increase by underground rhizomes; thus one or two plants may be divided or propagated to increase the planting economically.

Twigs and branchlets are showing deepening color and enlarging buds: although it is winter, things are not static. This shows that sap is rising, a gradual stirring, as trees and shrubs eke cautiously out of dormancy until at some phenological punctuation point they enter into a full-blown awakening.

We are most familiar with the phenomenon, perhaps, in the action of sugar maples: sunny days cause the trees’ sap to rise, and it is able to be drained out via taps; then low nighttime temperatures cause it to subside again.

It is generally true that the best time to prune is during dormancy (the adage “when the clippers are in your hand” notwithstanding), although clarification is needed.

Knowing which trees are “bleeders” and when to prune them will minimize an unsightly result, which often occurs from pruning in late winter/early spring, when sap is rising. These include birches, maple, hornbeam, laburnum, mulberry, linden, grapevine, styrax, and others. Prune them between late summer and midwinter. Some kinds are pruned at specific times — check individual species to be sure. Among them are magnolias (prune early to midsummer); mulberry (autumn to early winter); pagoda tree, or styphnolobium (summer); linden (midsummer to midwinter); hornbeam (late summer to midwinter); grapevine (prune after leaf fall, but ideally before Christmas). Prune prunus species later than apples and pears (after April).

Prune outside the branch collar, the slight swelling or wrinkle around the branch where it leaves the trunk. Do not leave stubs nor make flush cuts — inside the branch collar — because both of these prevent healing of the pruning cut. If it is a large branch, shorten back first to relieve weight of the branch. Then make an undercut to prevent downward tears of the bark.

I have started to work over the roses in my own garden. Last year the season overtook me before I could get to the climbers, so this year there is a lot to do. The canes I wish to retain, mostly greener, less gnarly ones, are pruned with laterals taken back to about three or 4 inches, and then laid as horizontally as I can persuade them to go. 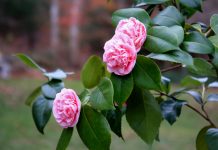 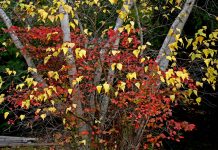 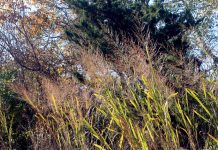