Until recently, Mr. Ahren operated the Noepe Center for the Literary Arts in Edgartown. The property that housed Noepe is being sold, and Mr. Ahren is considering finding a different home for the programs that have attracted writers from the nation and the world to work since 2007 on their craft.

Mr. Ahren is familiar with the role of poet laureate. He served as West Tisbury’s poet laureate (2013–15), a town position championed by Island writer Cynthia Riggs and approved at the West Tisbury annual town meeting in 2006.

We have had poets laureate in this country for 70 years. The best-known these days are probably Robert Frost and Billy Collins. Mr. Frost and Maya Angelou, who was not a poet laureate, read from their work at the Inaugurations of Presidents John F. Kennedy (1961) and Bill Clinton (1993). Both gave a ratings boost to the art form perhaps least understood by our citizenry as a whole.

The Times spoke with Mr. Ahren last week about the value and potential benefit of poets laureate in the body politic.

Is “poet laureate” simply an honorific title? What’s the value?

I believe what William Carlos Williams, the 1962 poet laureate, said about it in one of his poems: “It is difficult /To get the news from poems /Yet men die miserably every day /For lack /Of what is found there.”

Hmm. So what “is found there”?

Social discourse now is often just a flame, a reaction, such as tweets. It’s not considered, thoughtful discourse. What poetry requires of us is that we consider things, ask questions, and often, wait for the answer. Poetry is a considered utterance in reaction to something closely observed. There is an element of meditation to it.

Yet there is a sense that poets and their work are beyond most of us. What about that?

My sense is most people’s reaction is that they don’t understand poetry, that they couldn’t do poetry, and that there is no connection to our daily lives. Poetry is often reserved to mark transitions, such as weddings or funerals. But answers in our complicated world require considered, nuanced responses not available in 144 characters. This is what I think the practice of poetry does.

So what is your role as poet laureate?

As an ambassador, because I think poetry has a place in our daily lives, and I see a growing appetite for poetry. I’m going to continue to visit schools, to organize readings at Featherstone Center for the Arts and elsewhere, as I have been doing, but what I need is to find simple ways to engage people in writing poetry. In that way, it’s not so different from Twitter: Check in with yourself and jot down a few lines of poetry. 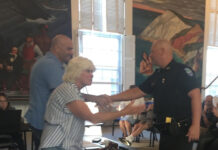