Sam Bresnick drilled a line-drive single to right field in the bottom of the fourth inning, scoring Chris Mayhew to break a 1-1 tie as Martha’s Vineyard held on for a 2-1 non-league win over the Norton Lancers, Wednesday at Vineyard Baseball Park in Oak Bluffs.

With the win, the Vineyarders (12-7) exacted some revenge over the Lancers, who took the opening game of the season 3-2 in extra innings.

Chris Mayhew knocked in Aidan Aliberti with a line-drive RBI single in the first, singled again in the fourth, and stole a base. Elias Fhagen-Smith started the game with a leadoff single.

Vineyard starter Jonas Lukowitz pitched four innings, allowing three hits and an earned run with four K’s and a walk. James Sashin earned the save, closing out the Lancers with three innings of one-hit shutout ball, striking out three and walking one. 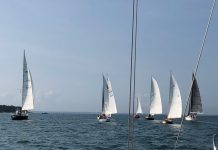