Julia K. Rosenwald of Philadelphia and Chilmark died peacefully in the Philadelphia family home in which she had lived for the past 70 years. She was 101 years old. 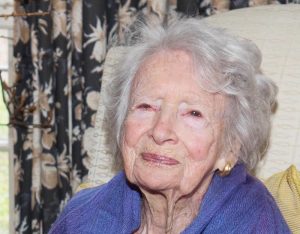 Extremely involved in the community, she served on many civic boards, and she was particularly proud of her work with the Federation of Jewish Agencies, the Child Study Center of Philadelphia, and the Child Welfare League of America, based in New York City. She volunteered at the Conwell School in Kensington, helping students who had difficulty learning to read, and later taught English as a second language at the Nationalities Service Center in Philadelphia. She stayed in touch with many of her students well into their adult lives.

Judy, as she was known, was born in Philadelphia on Jan. 9, 1916, to William Greenewald and Sara Lieberman Greenewald. She attended Cheltenham High School and Sarah Lawrence College. She had an enormous and beautifully curated collection of friends of every age and from every area of her life, and she remained close to a great many of them until her death.

Judy and her late husband, Julius “Dooley” Rosenwald II, discovered Martha’s Vineyard in the late 1930s when they were newly married. They introduced their children to the Island in the early 1950s, renting houses many summers until they built their “summer shack,” as they called it, in 1963. Thanks to Judy and Dooley, there are now four generations of Rosenwalds who love the Vineyard. Judy continued to visit the Island almost to the end of her long life.

A memorial service will be held at a later date. Contributions to the charity of your choice would be most welcome.