Shirley Gray Vincent Kaeka, 80, recently of Hilo, Hawaii, and a longtime resident of Vineyard Haven, died on May 22, 2017, due to systemic illness, three days short of her 81st birthday. Shirley recently moved back to Martha’s Vineyard to spend her final days with her loving family and friends. Born in North Tisbury to Chester Gray Vincent and Hannah Ann Webb, she enjoyed the simple life of raising farm animals and dancing at the big barn at Seven Gates. 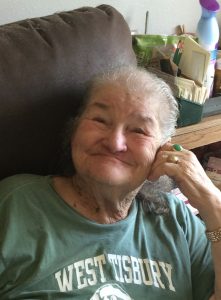 Curious to explore the world, Shirley joined the U.S. Navy in Boston on Oct. 25, 1955, as a seaman recruit, hoping to become a medic. Shortly after arriving at the medical training facility, she realized she had issues with open wounds, and transferred into the accounting department. At U.S. Naval Station, Long Beach, Calif., she met the love of her life, Daniel K. Kaeka III.

While stationed in California, Shirley gave birth to her son Daniel IV, the first of five children. She received an honorable discharge from the Navy, and with her husband relocated to Makaha, Hawaii, to enjoy the warm weather and sunshine. While there she gave birth to her daughter Hannah, but returned to Martha’s Vineyard to help care for her ailing mother and her growing family. Over the next 38 years, she held many titles, as home healthcare worker, housewife, and caregiver to so many children, not all her own.

Shirley had a green thumb and a passion to grow things, as well as a love of working the land. On her piece of land in West Tisbury, she would raise animals from goats and pigs to chickens and ducks, and grew a wonderful garden filled with an assortment of vegetables. At her home in Vineyard Haven, she would grow amazing sunflowers and various dahlias and other flowers, which she would sell along the roadside on Franklin Street. Shirley also enjoyed sewing in various styles, and loved the challenge of converting old clothes into something useful. She loved to make patchwork rolled oblong rugs, which she gave away to her children and friends.

After her husband’s retirement from the Steamship Authority, the couple made plans to retire back in Hawaii, the land of white sandy beaches and rainbows. They were able to live their dream for 13 years before her husband died in October 2015.

In lieu of flowers, a donation can be made to the Hospice of Martha’s Vineyard in Shirley’s name. A private memorial service will be held at a future date.