Charles W. Bradley Jr. (Brad) died on Wednesday morning, June 7, 2017, at his home in Oak Bluffs. He is survived by the love of his life and, as he still called her, his bride, Mary Ann (Roberts) Bradley, and their children, Lynda Bradley-Guerra of Ellicott City, Md.; Charles W. Bradley III and his wife Tolu, of Milton; Susan Ifill and her wife Lynell James of West Orange, N.J., and John W.R. Bradley of Roxbury. 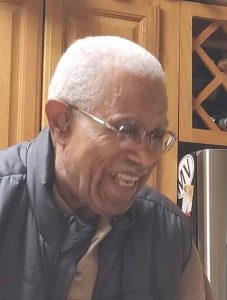 Brad was born in Lynn on March 6, 1933, the son of Charles W. Bradley Sr. and Florence M. (Fowler) Bradley. He enlisted in the Army during the Korean conflict, and was stationed in Germany. After his discharge, Charles re-enlisted with the Air Force for another four years, as an MP stationed in the Azores, Andrews Air Force Base, Westover Air Force Base, and Camp McCoy.

When he returned, he attended Northeastern University, graduating in 1979. He worked as a superintendent of the U.S. Postal Service for 24 years; he also worked as a salesman for Paine Furniture, and as the mailroom supervisor for American Student Assistance. Brad loved his family dearly, adored his girlfriend, as he addressed his wife of more than 60 years, and enjoyed deep-sea fishing. He was a member and past president of the Sea and Surf Anglers’ Club in Boston, and its sister club, Blue Water Anglers in Bermuda.

In retirement, Brad continued to give of himself as an eucharistic minister, and volunteered for Meals on Wheels, the Oak Bluffs Senior Center, Birthright, and anytime someone needed a helping hand. He had an outsize sense of humor, and was extremely witty; no one was spared, and he was dear to all, whether you met him for the first time, or he knew you a lifetime.

In addition to his wife and children, he is survived by his sisters Carole Smith, Deanna (Dee Dee) Davis, and Deborah Potter and her husband Timothy; his seven grandchildren; Sean, Jason, Christopher, Nicole, Monique, Joshua, and Julia; and his three great-grandchildren, Michael, Eva, and James. He was predeceased by his siblings Michael Bradley, Ellen Bradley, and Edward Bradley.

A visitation period will be held in Chapman, Cole and Gleason Funeral Home, 475 Main St., Falmouth, beginning at 9 am for family and friends.

Donations may be made in his memory to Windemere Nursing and Rehabilitation Center, P.O. Box 1747, Oak Bluffs, MA 02557. Visit ccgfuneralhome.com for online guestbook and information.