Sidra Royal Bullard Dumont died Saturday evening, June 24, 2017, at the age of 23, at the Martha’s Vineyard Hospital from complications of several autoimmune syndromes. 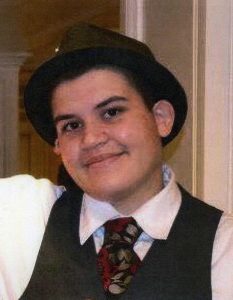 Sidra entered the world my daughter and left the world as my son — and I could not be more proud of his bravery, grace, humor, and tenacity handling such difficulties physically and mentally, and also being himself in a world with such strong social norms. He had a kind and tender heart and a keen wit.

He was a natural musician, and could play any instrument he picked up, from the flute, piano, drums, saxophone, viola, and guitar to the magnificent gift, the instrument of his operatic singing voice. He once told me he could “see” music in colors.

Sidra graduated from the West Tisbury School in 2007 and then from MVRHS in 2011. There he was a member of the Minnesingers, and toured Europe three times with them, and also with Sound of America. In drama he played Joanne in the production of “Rent,” and had good reviews after soloing at the evening of the arts. He was a perfectionist in all he endeavored.

After high school he attended two years at Hollins University in Roanoke, Va., to study voice and music. His other passion was horses; he was the proverbial barn rat, riding, training, and competing. He started riding at Crow Hollow and then at Red Pony, and evented with his best friend Smokey. He also spent many summers at Vershire Riding School in Vermont, and competed in USEA Area 1 events, and took first place for Beginner-Novice his first time out in Huntington, Vt.

Sidra was also a prolific writer, who could paint pictures with words — so much talent, so much love of life, friends, family, trans groups — they all meant so much as his world grew smaller. One could always see him wandering around the Island with his service dog, Sadie Mae.

Sidra is survived by his mother, Karen J. Dumont of West Tisbury; his father, Frazar J. Bullard of the Bahamas; his grandmother, Oslie Bullard, and many, many siblings, aunts, uncles, and cousins. He was predeceased by his maternal grandmother, Hilma Dumont.

Visiting hours will be held on Sunday, July 9, from 1 pm to 3 pm in the Chapman, Cole and Gleason Funeral Home, Edgartown Road, Oak Bluffs, with a prayer service officiated by the Rev. Cathlin Baker at 2:30 pm. According to Sidra’s wishes, cremation will follow. Visit ccgfuneralhome.com for online guestbook and information.