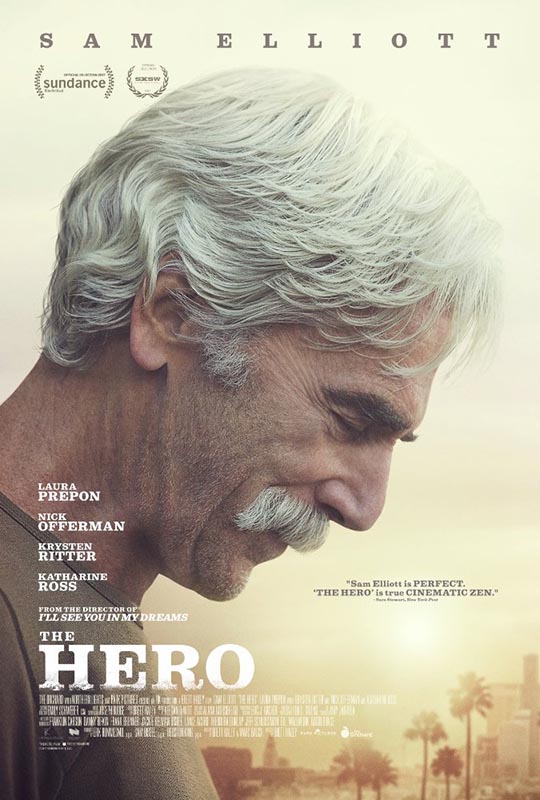 “The Hero,” starring Sam Elliott, the actor with the iconic deep voice and brush of a mustache, opens next week at the Martha’s Vineyard Film Center. Fans who have followed his career will be sure to enjoy this Elliott showcase.

Usually appearing as second or third banana, Elliott started his career with a mere three words as Cardplayer No. 2 in “Butch Cassidy and the Sundance Kid.” From then on, his compelling presence has made viewers want more. Recently he’s shown up as the elderly, still handsome charmer in movies like the Lily Tomlin vehicle “Grandma” and Blythe Danner’s “I’ll See You in My Dreams.” A mane of white hair, scrawny neck, and wiry frame make him a realistically handsome senior citizen at 72. “The Hero” is the first, well-earned time he’s played the lead in a movie. Director Brett Haley, using Elliot in both “I’ll See You in My Dreams” and “The Hero,” is obviously a fan, and his “The Hero” script draws directly from Elliott’s life.

Haley has created a mellow, quiet film where plot takes a back seat. It opens with Elliott, playing Lee Hayden, recording a voiceover ad for Lone Star Barbecue Sauce. That voice, of course, is what makes the scene. Lee learns he’s got pancreatic cancer. Divorced from his wife Val (played by his real-life wife Katharine Ross), and estranged from his daughter Lucy (Krysten Ritter), the once successful actor resists letting them know what’s going on.

Instead he hangs out with Jeremy (Nick Offerman), his buddy and former co-star in a one-season TV series, “Cattle Drive.” Jeremy also serves as his drug dealer, and the two of them smoke weed while watching old Buster Keaton films. It’s a good fit, since Lee is as deadpan and funny as that silent film star. Instead of talking about his illness, he tells Jeremy he’s going to make a movie. Fantasy scenes follow of Lee in his one real hit, “The Hero.” There are also lots of skylines, sunsets, and cityscapes, along with lapping surf scenes where Lee contemplates the great beyond.

Then Charlotte (Laura Prepon of “Orange Is the New Black”) arrives at Jeremy’s to score drugs, and she and Lee hit it off, although he’s twice her age. Lee, who has just found out he’s going to win a lifetime achievement award from a fan club of sorts, invites Charlotte to come along. After he tells the audience they all deserve Lifetime Achievement awards and gives his to a stunned audience member, his speech goes viral on the Internet. He even gets a movie audition.

Charlotte is a stand-up comedian who uses an insulting “old man” riff as material. As the film meanders along and Lee copes with his impending mortality, Charlotte sticks with him, gifting him a volume of Edna St. Vincent Millay poetry.

“The Hero” is an old-fashioned film, snail-paced by today’s standards and conventional, but neither matters. Watching Sam Elliott is satisfying enough.

For information and tickets for “The Hero” and other films playing at the Film Center, see mvfilmsociety.com.